An Endless Almanac Of Terrifying Wounds 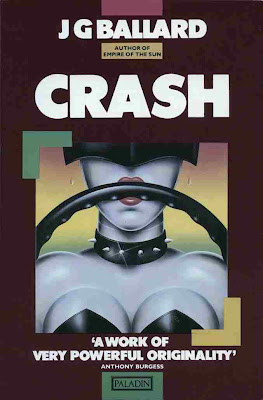 I grew up along a main road, among concrete monstrosities that once appeared pregnant with mystery and possibility (but in retrospect were bloody tragedies). Like many others living near a city centre, I witnessed my fair share of motor accidents, both minor and horrific. Even now, cars bring to mind the stench of eye-watering emissions, small animal carcasses and ominous smears of blood along the kerb: brands of unearned power over nature and the fragile pedestrian (another vulnerable constituency neglected by neoliberalism). Every triumphant roar replaced by a new one, as traffic proceeded on its predatory journey, oblivious to it's own final destination. As a virginal teenager, it was perhaps unsurprising that J.G. Ballard's Crash would strike such a nerve. A pornographic, but highly unerotic, novel centered around the allures and traumas of motoring held a perverse glamour. To this confused adolescent, the popular obsession with the motorcar was as mysterious and ominous as sex itself. The destructive - or of course liberating - potential of both leads western societies to mystify them with layers of distorted exchange value; not least with their taunting promises of plentitude. Our lonely, Faustian trade between alienated desire, the consumer spectacle and the infernal machines of capitalism are even more starkly apparent in this century of fractured communities, economic pillage, and wars of peak oil denial.

Although often regarded as a cold, clinical author, I'd argue that Ballard is anything but. The supposed 'blankness 'of his prose opens up caverns of unspoken yearning and a need for human connection. A widower for most of his adult life, there's a recurring sense of loss to his stories. His extended autopsies on "the death of affect" are thinly-veiled acts of mourning, made explicit in later autobiographical works. Crash is a typical example of his characters compensating with flights of creative hubris, according to technology and its audiovisual sermons (or 'the media landscape'). His innerspace visionaries and 'hoodlum priests' invariably fall to earth with burnt wings, his survivors remaining as seduced observers. Not so much scarred by their (sexually ambiguous) love triangles, as by the environments within which this desire operates. Ending on notes of muted sadness and resignation, the Spectacle remains as impregnable and distant as the intimate, but alien, landscapes that negotiate the desires of his characters. For all of Vaughn's grand claims, he climaxes as an anonymous victim to the Elizabeth Taylor of his fantasies. The pornographic imaginary ultimately answers to the faceless technology that generated it (a motif of Ballard's beloved surrealists). For stories set in the present, this entropy is largely private, internal. If technology dictates the inner world, then humanity as whole is dwarfed by unpredictable nature. Explicitly so in his 'disaster cycle', and other futuristic stories where it overwhelms the grandest of human designs. For Ballard, the future is haunted by the imaginative consolations to be found within departures. Emotion is replaced by theory, a coping strategy in denial of the remorseful, vulnerable mechanics of being human. A resource with which to steer around trauma:

The above film was directed by Harley Cokliss, a name suggestive of some pornographic car part. Older readers may also recognise Gabrielle Drake, Crossroads heroine and sister of Nick. This was actually broadcast before publication of Crash the 1973 novel, inspired by the Atrocity Exhibition passage that preceeded it. Unlike many 'name' novelists, Ballard actually talks like he writes. Always a comfortable and engaging television presence, he aquits himself well in this 'adaptation'. It's also a relic of the days when pulp, public television and the avant-garde would cross paths for a general audience. It has an atmosphere of reverence and horror for the urban environment, an approach common to early 70s British culture. Later, and in tune with the rise of Thatcherism, this became supplanted by revulsion at the population as well as the design of urban Britain. The New Right ethos paradoxically promoted the car as a means to belong in a society that was "no such thing"; with Thatcher famously dismissing public transport passengers as 'losers'. In line with this paradox, 80s advertising tended to promote the car as protective rather than free; concealing its sexual appeal within promises to prevent against mingling. Somewhere along this intersection lay Crash's status as the cult novel for post-punk subcultures, appropriate to their consumerist ambivalence and morbid sexual mores.

For a writer of supposedly 'narrow' concerns, Ballard is someone I return to far more than other teenage favourites (you can guess the usual suspects - I am a cliche). Despite reoccuring obsessions, his passive dialogue opens more room for speculation on the part of the reader than, say, Burroughs (infected as he is with a distinctly macho insistence on writerly authority). Indeed, Ballard's obsessions are feasible basis for an always interesting blog. Perhaps time will embed his more trans-literary qualities. As with Don Quixote, Gulliver's Travels, Peter Pan, Frankenstein, The Trial, 1984, Waiting For Godot etc. his stories could acquire the texture of fable, where the strength of concept can outweigh literary merit. It's somewhat surprising how rare film adaptations of Ballard's work have been. Compared to his Burroughs misfire (or anything starring Jeremy Irons), David Cronenberg's Crash has aged surprisingly well. It captures that removed sense of emotional desperation so common to Ballard. However, its location neglects a central underlying theme: how the British middle-class are, well... fucking weird. Perhaps compelled by the post-war welfare consensus (and experience of total war), enough of its cultural producers were once aware of this; unafraid to document it from a variety of angles. Nowadays, they appear too preoccupied with celebrity evisceration, narcissistic self-surveilance and fetishised motorist entitlements to notice anymore.
Posted by David K Wayne at 04:38

Always good for a chuckle:

Re: "...revulsion at the population as well as the design of urban..."

In some respects, I'd argue that there was a vaguely similar thing happening in the U.S at the time. Tho' I'm hard pressed to think of a single American author that touched on that cultural trend in any way.

I don't think Ballard was about revulsion against the poor, so much as intense insularity amongst the bourgouis.

From my limited knowledge, it seemed US authors acknowledged it via the past - like with E.L. Doctorow's 'Ragtime'.