I’m About To Lose Control….. 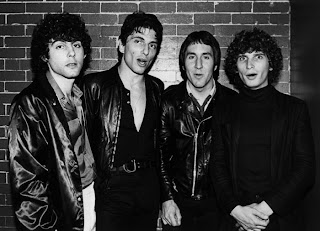 On the one hand, much of the music of the American New Wave of the late 1970’s was an attempt to infuse rock music with a mythic-poetic quality, a contemporary equivalent to the Symbolism of the 19th Century, in which the artist’s life was lived through their work to the extent that their very being became itself a lived poem, and in turn took on the quality of legend. Even your very name could be the subject of artistic transmutation.

On the other hand, you had The Knack. Formed in Los Angeles in 1978, the band were one of the most fascinating and controversial groups of the late Seventies. Like so much of the cultural output of the era, their work was equally capable of repulsing both conservatives and liberals, with its seemingly relentless fixation with the minutiae of incipient sexual intercourse.

In many ways, The Knack’s songs are some of the most compelling ever recorded, at their best working themselves up into a tumescent lather, as they flip back and forth through the attraction/repulsion dynamic of those first trepidatious fumblings of adolescent sexual discovery. Forever the nerd, singer Doug Fieger’s lyrics stammer like a schizoid masterbatory monologue as he runs through the potential fleshy joys and painful rejections to be encountered as he lasciviously circles his target.

With his toad sweat covered brow, glove-puppet eyes and flaring Kenneth Williams nostrils, Fieger would be unbearable were it not for the fact that The Knack were one of the most compulsive riff-machines of the era. Pinned down by the clinical drumming of Bruce Gary, the band’s timing is immaculate, opening and filling space with some of the tightest, sparest playing conceivable. It’s one of the paradoxes of The Knack that though their whole oeuvre encompassed the subject of frustration and denial, their music was supremely satisfying, its surplus libido tickling the listener with endless stutters and tics. Even their solos are punctually pleasing, being lyrical and expressive, but never lasting a note longer than they should do.

That said, there was always something faintly obscene about The Knack, and America’s moral majority, with its impeccable flair for uncovering the decadent, was soon on the trail. The Knack were literally persecuted. Initially this merely concerned their alleged over-similarity to The Beatles (eh?), but when it began to be noted that the band were considerably older than the teenage girls they lyrically pursued, a full-blown "Knuke The Knack" campaign followed in earnest.

Riven by internal tensions of their own, after two great albums the band recorded the apologetic "Round Trip" in 1981 and disbanded. Inexcusably brilliant, it goes without saying that we shall never see their like again.
Posted by Phil Knight at 20:26

Not that I ever paid the band much attention, but ironically II'd been wondering if anyone'd attempt a revisionist take on The Knack. But: going by memory, a few things...

1) The Beatles comparisons & parallels may have been mostly on account of the band's packaging and PR, which overworked it as a marketing angle.
2) I seem to recall, at the time, a fair amount of animus being directed at them via the U.K. music press, as well.
3) I always equated their success with the emerging backlash against disco. I remember when "My Sharona" turned up on the radio and shot up the charts. DJs seemed to enjoy playing it, sometimes prefacing it with some comments to the effect of "And finally...here's some ROCK'N'ROLL!!!"

(BTW: Very much liking the change with the new masthead photo.)

I'm not sure if it was animus from the UK music press as much as they were just seen as a novelty band, and therefore not worth taking seriously.

I don't think they should even need a revisionist take tbh - their records are worth listening to for the drumming alone. They're yet another band that people don't seem to actually listen to - they just let a flag with "The Knack" written on it pop up in their brain.

As for their meteoric rise and catastrophic fall, well it's all to do with social currents (that now seem bizarre) that were beyond their control. Which makes a good story, of course.

Punks really hated them. Are you aware of this?

No, I didn't know about that - The Dead Kennedys are a band I've never paid any attention to.

I always thought they were more about gesture-politics than politics proper.

Also I always suspected them of being crap, although in fairness I never went to the effort of confirming or correcting this suspicion.

Actually The Knack seem to have had the same function in the US that The Stranglers did in the UK - as a kind of sin-eater band onto which the "authentic" punks could project their own insecurities/envies.

i.e. they're old, they can play, they're signed to a major label etc.

It's like The Mekons recorded "Trevira Trousers" in which they sang "buy The Stranglers' new LP, give more money to United Artists" - at the time The Mekons themselves were signed to Virgin.

Good comparison with the Stranglers having a similar 'critical' function (although Generation X/Billy Idol 'won' as the sin-eater in the end).

I never quite 'got' the Mekons, but the first Dead Kennedys LP was a classic at least - Biafra actually walked it like he talked it, unlike many others of his generation. Some of their lyrics are still laugh out loud funny too.

The Mekons are all over the place really, some good stuff, some nondescript.

As for the DK's, yeah I might be being unfair to them, but I'm too long in the tooth now to start checking out icky punk.

After the Quo, there's no going back...

Agree about the new title image BTW - says it all, really.

How did Greyhoos twig that it was me who did it, though?

Did you do Reagan on the other one too? I quite like the 'presidential horseplay' theme.

Yeah I thought I'd go for a bit of thematic consistancy.

It was more of a "To Whom It May Apply" big-up. I suspected that if it wasn't Phil, then it must've been either Wayne or Carl.

Re, the above comments: If you were a punk back in the day, hating took up the larger portion of your faculties/waking hours. But hating The Knack was hardly going against the tide of the majority (Moral or otherwise).

As far as the DKs go: If they failed to grab you then, I doubt that doubling back at this point will change your opinion in their favor. Far from it.

It didn't help the Knack that Dubya turned out to be a fan of them....

Never hated them, but they're in that subset of "weird retro American rock bands of the late seventies, boring" mainly based on My Sharona, to be honest.

The Dead Kennedys on the other hand are one of my favourite echt-punk bands and Biafra certainly walked the walk politically as well as talking it. Mayoral candidate a couple of times and all that. See wikipedia for more details.

Musically, if what kept you fromt hem was prejudice rather than actually having tried them, unlike Greyhoos I think it may pay to give them a try; it is some of the best punk ever recorded imo.

I seem to remember Kurt Cobain liked the Knack, but then disavowed them when he found out they were very uncool. There's a story that he played a Knack record (the one with My Sharona) to a fellow hipster, gushing about how they were this great, rare 70s new wave/punk band. His friend was embarrassed by this faux pas.