Since Phil's Carl's yet to pipe up with his unpacking of Zardoz, I thought I'd kill off a few lower-tier candidates in the meantime. So here's a random selection, in no particular order... 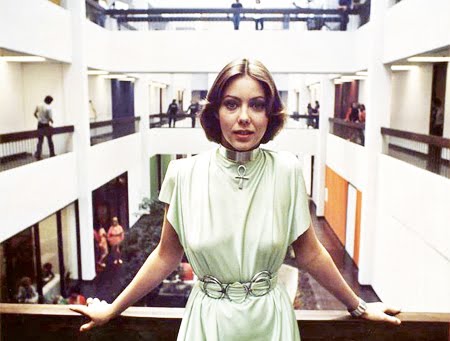 We've seen the future and it's a shopping mall in Fort Worth, Texas. And yeah yeah -- it's better to burn up than to fade away. Effectively what we have here is the previous decade's generational war slogan of "Never trust anyone over thirty" extrapolated in to an extreme, resulting in the dystopic dénouement of the premise for Wild in the Streets.

Yet how humbling, how Romantically fatalistic -- in this, the year of the American bicentennial -- to see the nation's capitol as ruins, strewn with vines and all sorts of flora, patinaed by the elements to which they've returned. And Sir Peter Ustinov's wrinkles are a marvel to behold and to touch; the very embodiment of nature itself, if not of the authority and experience so thoughtlessly discarded by the cult of youth.

But nevermind the ageism angle, because Richard Pryor has the last word: "Looks like white people aren't counting on us being around." 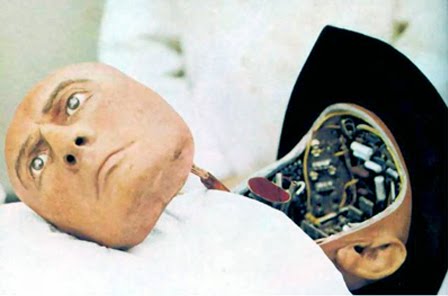 The excesses of empire, alternate take. One of the advantages of this empire being that -- artificially, and merely for the sake of leisure -- one can colonize the past. Key concept: Hostile objects. 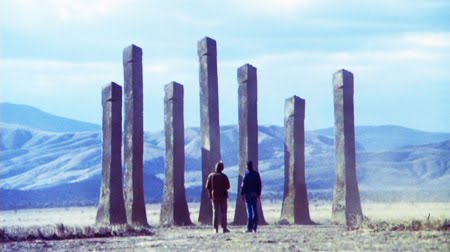 Effectively this borrows a premise that was put forth some years earlier in 2001: A Space Odyssey, that the human race is overdue to make an developmental leap, and that it need help from an outside party -- of extraterrestrial origin -- in order to take that next step in its evolution. And as in 2001, it puts that thesis across in a confusingly oblique way.

Exactly what the nature of this impasse might be, who can tell? But noted that the mathematician believes that everything can be quantified in numbers, and the ants -- in their own way -- prove him correct by demonstrating the power of collectivity. But don't look to a movie that pilfers much of its "action" from a nature documentary for any sort of clarity or coherence. 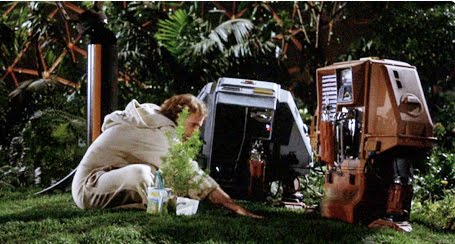 In which Deep Ecology meets deep space. With all plant life on earth being choked off by (we're to assume) pollution, Freeman Lowell would sooner kill a man than a tree. This of course is bound to stretch the borders of pathos for most viewers, as much as the plot stretches those of scientific plausibility. For starters: The spaceship survives a passage through the rings of Saturn with all but the most minor of damage. Which is ridiculous enough to start with, exponentially moreso when you note that the spacecraft bears the American Airlines logo.

Directed by Mike Nichols, directly following the warm press he'd received for Catch 22 and Carnal Knowledge. The only interesting thing is about this film is that Nichols took the project after (reputedly) Roman Polanski was slated to helm the project. But Polanski, who was dealing with the aftermath of Sharon Tate and his unborn child's murder at the hands of the Manson clan, decided that making a screen adaptation of Macbeth was more suited to his mood at the time. Discuss. 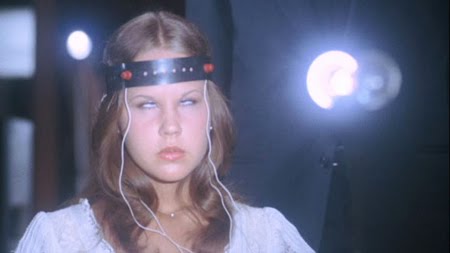 With which the director, having missed out on a pile by turning down the first film in order to make Zardoz, doubles back and tries to recoup his losses by agreeing to tackle the sequel.

Should we be surprised to learn that the forces of the Prince of Darkness directly link back to the heathen hordes of the "Dark Continent"? Or should we be more surprised that, in a supposedly more enlightened age, such a plot twist was expected to go uncontested?

No matter. The result was universally ranked as one of the decade's worst films. Still, between its gloriously unenlightened post-colonial confusion, its jumble of popular paranormal phenomena, and its bizarre efforts at glamorizing its pubescent female lead, it's also one of decade's most perversely & hilariously enjoyable movies.

Email ThisBlogThis!Share to TwitterShare to FacebookShare to Pinterest
Labels: Film, Horror, Occultism, Paranormal, Quaint Incoherence, Sci Fi, Why you should never listen to the critics

Back when I was a pre-literate Bruce Dern fan, Silent Running used to make me cry. I won't hear a bad word said against it!

Coulda squeezed Altered States in there too, even if it did come out in 1981. Like Day of the Dolphin, it was based on the wackier ideas of Dr. John C. Lilly, excitable/mellow 70s Ketamine guru. And Ken Russel was the definition of 70s auteur excess, somewhat stranded in the following decades.

Yeah...was tempted to make the Lilly connection, as well as going into isolation tanks and Altered States, but that leads to more difficult tipocs. Such as: What sort of 'sroom-fueled tangent was (having read the orig novel) was Paddy Chayefsky off on, post-Network? And the whole matter of Ken Russell. Proverbial Pandora's box, all that.

But I was trying to keep things short. Also curbed a long punning rift of Boorman vs. Boers, which was shaping up (via a shrinking-empire revenge fantasy) to be be a corker. But, believe it or not, I am occasionally capable of a little self-editing.

But about Silent Running. Yeah...I can see it, bonding with nature and robots who can -- on their own -- learn to cheat at poker. I probably had the same inclination as a kid. But then the Joan Baez tunes on the soundtrack kicked in and ruined everything.

I liked Joan Baez cos she was on Sesame Street (or was that Buffy St. Marie?).

Now you mention it, there's a lot of end-of-Empire weirdness in Boorman's more indulgent movies. Never occurred to me before - might plagiarise that riff for a later post!

After the mid-life howls of pain that were Hospital and Network, it's clear Chayevsky settled for the best option for growing old - tripping his nuts off! Worked a dream for Cary Grant, anyway.

But less glibly: Had it not been for Bruce Dern's low-level smoldering in that role, doing a good job of "humanizing" the story, the film probably would've met with nothing but a mix of apathy and hostility.

Dern's a great actor. He did 'quiet intense' better than Deniro I reckon (love his sleazy cop in 'The Driver'). So good, I was rooting for him to shoot Jane and Jon at the end of 'Coming Home'!

Silent Running though, I think the BBC used to show it on peak time every 6 months during the Seventies. I must have seen it about four times before I was 8 years old. When he abandons the last robot (Hewey?) it's like the Brief Encounter of my generation.

Been watching The Man From Atlantis on Youtube (not very good picture quality alas) which has given me an idea.....

You're right. My mistake/

And re, Man from Atlantis:I recall that as being a scientific trope back in the first half of the '70s -- the whole "the future is underwater" scenario. All talk of which seems to have died down after a few massive oil spills.

ah yes...I am working on that Zardoz post, honest...

Total non seqitor - when I was in school, we used to exclaim something as surprisingly good (a meal, film, new girl in class etc.) by saying "Zardoz!" in a Sean Connery voice. Didn't catch on as much as we hoped it would...

BTW did you place Jenny in sci-fi negligee as the first picture to grab our attention? She seems to have a strange hold on a certain generation of British men (see also Helen Mirren). Some peculiar teenage thing that extended into late middle age for so many.

Then it worked! It worked!!

Nah, seriously: That may have had something to do with the selection of the image (tho' I was wasn't aware of the degree of her lasting appeal), but more specifically I was searching for an image were the shopping-mall location looked the most blandly un-futuristic.

As far as the structure of the post -- pretty much in the order I drafted it, which was in the order that these films came to mind.

Well speaking personally, I got over the 'Agutter thing' past my teenage viewing of Walkabout. However, I do know guys pushing fifty who get all 'flush' when older Jenny crops up on TV (and even more flush at the idea of Mirren playing the Queen! Must be a patriotic thing).

Dunno about the 'patriotic thing.' From what I've gathered, what you're talking about isn't limited to 'native' shores.

Mirren or Agutter? Find it fascinating which stars maintain their 'hold' way past middle age (if we had more female contributors/commentators, I'm sure there'd be a few male geriatric sex symbols too).

Agutter, and largely (it seems) because of Logan's Run.

As far as Connery impersonations go, he's always good for an easy laugh. For instance, I happened across some forgotten action movie he was in on TV some months ago. Smack in the middle of some scene where he and a partner are up on some balcony with guns, pinned down by sniper fire. Had tuned in just in time to see Sean turn to his colleague and yell, "We're shitting ducks up here!!"

I was amazed they didn't have him re-dub the line.

If anyone can pass ducks without discomfort, it's Sean! He's a tough bastard.

Agutter as well. Mirren is horrendous.

I recommend any Sean Connery biography if you want to understand the finer points of the UK tax (taksh) system in the 1970's. The films he made were merely interruptions in his battle with the Inland Revenue.

I recall the old Scottish skinflint* winning a BAFTA for his preposterous performance in the Untouchables. He thanked bloody Nigel Lawson's recent budget because "the takshesh are cut". I thought he was classy before then.

(*Not a slur on his Scottishness, more that this militant SNP supporter's lived in Switzerland for most of his taksh-avoiding career).