"Bob, Rupert Is A Gentleman!" 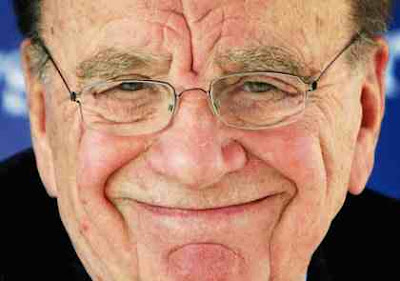 Essential reading from Adam Curtis' blog about the Great Old One Rupert Murdoch, and his aggressive, underhanded entry into 'the establishment'. Have to admit I've been kind of semi-obsessed with the reader-retarding, lying, union-busting, racist, sexist, homophobic, lying, tax-dodging, blackmailing, war-mongering, lying, neoliberal bastard since about the age of twelve. Not least because so many lives would have turned out much differently/happier/longer if not for his seemingly invincible, cancerous influence on entertainment, sport, political discourse, business practices, public policy and the general intelligence levels of the UK/US since the 70s. That's as Fair and Balanced an assessment as I can offer.
Posted by David K Wayne at 19:21

I'm interested in him because he's the archetypal Faustian Man, a disciple of blind exponential growth. He's going to see his entire world fall apart over the next 5 or 10 years, which will provide us with at least a modicum of entertainment in the miserable years ahead.

His unraveling will be as close as the west gets to revolution at this stage in the game.

I'll also be happy to see the knives out for him and his minions from all the gutless politicians etc. who've trembled in his presence. I'm sure they've developed a fair amount of quiet resentment while he's 'briefing' them.

Also, if rumours are true about his youthful connections to the CIA (like the ones regarding Maxwell and Mossad), there may come a time when certain agencies have to show him who's the real sheriff in town. Careful on that yacht, Rupert...