Screaming In The Dark

When John Lennon experienced an existential crisis after The Beatles had broke up, he desperately cycled through a series of alternative therapies and philosophies before recording a self-indulgent LP and deciding that all belief systems were rubbish and retreating into the state of pampered egotism he felt most comfortable in.
When Oscar nominated lyricist and composer Dory Previn hit the same wall she poured it all into her music, culminating in a series of deeply idiosyncratic solo albums released between 1970 and 1976. Dory used these records to obsessively dissect where she had been and where she was going (her first solo LP of the decade was called ‘On The Way To Where…’), in the most coruscating and brutally self-critical terms, returning time and time again to key points in her angst ridden life. These recordings contain some of the most honest and searingly personal music ever pressed onto vinyl. 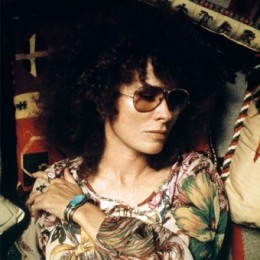 The appeal of singer songwriters is often that their stuff is easy to relate to, i.e. the audience feel that elements of their own lives are being set to music and reflected back at them: after all, they’re going through their own changes, their own relationships, their own shit. But no-one had shit like Dory Previn. As a child she had suffered at the hands of her alcoholic shell-shocked father who once held her and her mother hostage at gun point for several months before disowning her as someone else’s kid and dying; a devout Catholic, she had been beaten and abused by the Nuns at her school for the crime of being left handed; a dedicated wife and musical partner to Andre Previn, the break up of their ten year marriage (hastened by Andre’s affair with Dory’s close friend Mia Farrow) triggered a complete nervous breakdown, a long stay in a mental hospital and gruelling electroconvulsive therapy.
Dory takes the confessional song and turns it into show trial, most often placing herself (or Mia bloody Farrow) in the dock. Dory doesn’t just use elements of real life in her material, she is her material, and her songs are occasionally shocking in how frank and unflinching they are. If this sounds self-indulgent then, yes, quite right: it’s supremely self-indulgent, but done without ego or appeals for sympathy and with wit and irony and great eloquence and intelligence. You feel that Dory would have written these songs anyway simply because she needed to write them, the fact that somebody paid her to record them is irrelevant.
If there can be a single song that sums up Dory Previn’s unique talent, its probably ’Twenty Mile Zone’. Based, of course, on a true story, it details how she was pulled over by a traffic cop who had seen her driving along on her own at night, screaming out of the open car window at the top of her lungs. The genius of the song is in its jaunty and amusing representation of what can only be the symptoms of mental illness, and the telling of the two sides of the story: the cop who doesn’t understand why Dory is screaming, and Dory’s incomprehension that more people aren’t.


Unmann-Wittering.
Posted by Found Objects at 18:43