Free Your Mind... and Your Ass Will Follow. Funkadelic. 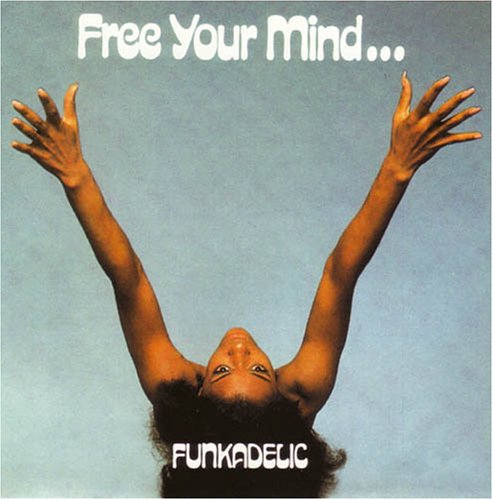 “My Cadillac and My Pinkie Ring: a Diagnoses of The Rapture of Objects in The Form of a Funkadelic Review By Ralph Dorey on Friday 13th of January 2012 in Holloway”


The Funk is physical, of this we can have no doubt. We hold this truth to be self evident, as to say “beyond representation”. The Kingdom of Heaven is Within. We need only look at the Funk to encounter its corporeal being, it requires trust and not the writing of a church.

Side One: Cock Block

“what time is this?” – George Clinton

Let us look at the body of Funk as wheeled in on the gurney. Dead on arrival but twitching (because to be truly physical, to loose one’s head and become animal, one must also become meat. To free one’s mind one must loose one’s head. The Funk is a corpse of transcendence, if the soul were to move not up to heaven but down to the crotch, down to the earth and death sex of soil-systems). The title track opens this monster, opens with the dying rays of Hendrix’s unification of church and state through the banner of stars and delivers a survey of land flattened (Holy Compression), describing space through the pan from left and right and left and right. Upon the flat landscape Funkadelic build a pyramid from a thousand parts. Thousands of pieces, thousands of instances, but only a handful of types, the [it ain’t a stab it’s a slab] of bass, organ and drum chopped tight with the (all men are) equaliser and staccato like a brick or a bar of pig lead. The funk is a flat square, existing only in two dimensions. Tight. Distortion is the sound of restraint, the head against the ceiling just as Funk is the music of repression, the repression of the self, of the head, just the body in the world (buried alive). A wriggle against the belt, the hand against the mountain, the impossibility of breaching the bounds made into a sublime act like an abstract fuck. Over and over and always now on the Plateau. Like a piston, Up For The Down Stroke.

There is no time in this song, no progression. A short while later Public Enemy would push this architecture beyond its last grasp at spacial orthodoxy. The Bomb Squad build samples like sedimentary rock free from human intervention and transcription. All time and space is now and in every moment, understanding that both history and architecture are perfected in the formation of coal (the black planet). Layers and layers pile down on now, hit all the buttons and hit record and repeat till the full black stratified mass fills all space and time. My Uzi weighs a ton.

The doctor leans over us, the dead and headless and strokes us with his words of comfort and the placebo of muzak. Drifting off we find we’re in the yard behind the church and down by the riverside. Sitting and leaning against a washed out marker. Shoulders to the stone we remark at how its shape now matches that of our torso and likewise the empty space above mirrors the absence of our own skull. The gravestone is too short though, to keep our back flat to it we should sit lower, out seat touching the submerged root of flat stone which carries down beneath the surface and supports the vertical weight above. Reaching up the doctor pulls on the hanging branches of Willow and Yew. The church tree and the river tree, the painkiller and the heart medicine.

Post-op: Freed of legs and stump-sunk to the belt we awake. Spine aligned to the stone and groin in the soil. A nothing above the nothing below and a horizon in between with a torso plugging the sky to the earth. Nearby the Willow sways a million repeated arcs of whale finger bones over the water like the infinite delay of the echo box through which pumps the snare. Repetition is to have one time at all times stacked up. The Yew just bends, denying the stability of form with a stretch while it in turn is denied the release of a break by layers of compression.

“from every head and ass” – George Clinton


Cross posted on The Institute for Spectralogical Audio Research
Posted by Anonymous at 21:20

I always have to read your posts twice. Consider that a compliment!

Any chance of (the very disturbing, Process-Church quoting) 'America Eats Its Young' as a follow up to this?

Actually, a lot of Funkadelic (Bootsy & Parliament not as much) is genuinely queasy and disturbing. The soil/shit/backside/sexual subconscious really does get under the skin with repeated listens, especially with regards to its complementary themes of post-Vietnam/Black Power disillusion and disorientation.

With P-Funk, there's parallels with dada and surrealism's relationship to WW1 and the (failed) revolutions that followed: all those disconnected body parts, fetishes, masks, primeval landscapes, military idiocies, sexual/Oedipal confusion, waste cycles, structures and borders turning into uncontainable goo, fluid, funk. 'Afro-futurism' is a lazy terminology IMO - it's Afro-surrealism (see also Delaney's 'Dhalgren' - more Ernst than Asimov). Which was present in the earliest recorded blues, and of course influenced the more interesting hiphop later on.

Hey Wayne, thanks! I saw the comparison with Dada and Surrealism and I completely agree. This music and this image is far too serious for the simply hedonism of psychedelia. The Pfunk mythology is a system against capitalist and colonial logic in the same manner as Dada was against WWI. After the early 70s albums though, it feels so much more light and disco, more like Frank Zappa, and then the whole thing falls apart for me and becomes too insular. Bataille renounced Breton's Surrealism for its placing of thought and the subconscious above material and returning to yet more anthropocentric dualities. I think Funkadelic, at least with some of those early albums managed what Bataille was after, even if it was eaten by the market soon after. (there's a pretty scared sounding record label radio ad for free your mind floating around youtube that's worth a listen.)
Afro Futurism does sound lazy, wasn't that a night they used to run at the ICA?

While writing that report, I've been watching the french mini series Carlos from a couple of years ago. It is a pretty interesting contextual comparison and reminded me of some Situationist International stuff that I wanted to talk about in relation to Funkadelic. So I'll have a listen to America eats its Young again and get back to you.
Thanks for bringing Dhalgren to my attention.

Like Sun Ra, Funkadelic inspired respect for their project from those who wouldn't necessarily listen to them. There was something subversive about taking the imagery of NASA or the US army and rearranging their terms of reference with their own counter-mythology, with a different kind of language (and yeah, disco took the 'edge' out of this, like it did with so many other Afro-American performers). I reckon the 'post-colonial' aspect of them was reflected in US movies 1968-77; in stuff like revisionist westerns (all those disillusioned, desolate landscapes), neo-noir (where White Man With Gun finds himself overwhelmed by a cruel, bewildering world) and the rise of horror, which was full of thinly-veiled post-Vietnam impotetence/urban rage:

Their surrealism had a lot of 'body horror' to it at first (birth/cannibalism/defecation as metaphors for social oppression etc). But it did get too insular and 'rationalised' after 'Uncle Jam Wants You' - a common problem with counter-mythologies (like sci-fi/fantasy/horror franchises, or 'high-concept' hiphop acts). By the time Reagan was in power, Clinton was singing about fast food, without much anxiety or disturbance.