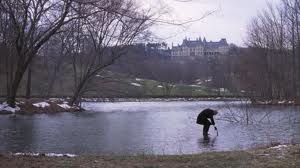 The enormously expanded and integrated mediascape of the Eighties and Nineties is strung out across an increased number of nodes through the growing accessibility of portable TVs. The reduced cost of owning a TV set, the possibility of having several distributed throughout the household, always on in the background, also helps to warm up the TV, to make it a tepid medium at least, a part of the furniture, attended to fitfully, increasingly a component of consciousness itself, a prosthesis, a plug-in, whose ubiquity and multiform extension as a provider of products and entertainment slowly integrate itself into the fabric of daily life such that it is neutralized, naturalized. You turn on the TV and have it as background while you do something else, it’s a comforting presence, without the image flickering away there, without the sound, things feel wrong, something is missing. This is probably the process all “magical” technologies go through, from centralized, big-and-bulky focus of astonishment to integrated, invisible under-girding of daily life.

TVs’ full meshing into the collective psyche and the political uses and implications of this process are the central concern of Hal Ashby’s Being There. The film is an adaption of Jerzy Kosinski's last novel, of the same name. Kosinski is himself a rather mysterious, quixotic character, an escapee from Communism who married into money in the US and wrote a series of repetitive, staccato and frequently brilliant novels in the Sixties and Seventies. Controversy of all kinds followed Kosinski around and there are questions both whether he plagiarized his story from a famous prewar Polish work and whether he deserved full screenwriting credits for the final draft that made the film. But these are incidental considerations, there’s little doubt that the vision of a simple-minded gardener who understands the world only through TV and whose observations chime in with the naturalistic fallacies of American capital is highly prescient. That Chauncey is a kind of middle-aged holy innocent, lost in a semi-senile stupor in which he can not discriminate between fantasy and reality, who literally thinks and speaks TV, beautifully anticipates Reagen’s imminent Presidency.


Being There’s vision, echoing that of Network, is of the new set of relations brought about by the merging of the garden and the network, and the magical capacity that is conferred on those who have never known otherwise, in a sense Chauncey is an earlier and older version of the “digital native”, and his advantage to the elderly and declining elite scions who adopt him is his age, he is middle-aged, pliable, well-mannered, bland, talks in optimistic generalities, psychically he represents an epistemic break from the old guard, his is a new and thoroughly modern consciousness fully shaped by the most powerful medium yet devised. He literallly thinks and talks TV, yet he also has a deep appreciation of nature. This confluence between the ecologically minded and the business-minded also informs much of the alternative-culture of the Seventies, and informs another of its key films, Stay Hungry.

Being There’s mise-en-scene is appropriately wintery and subdued, it begins and ends with death, the death of the Old Man that orphans Chauncey and the death of his benefactor that allows for his possible ascension to the Presidency, and it also turned out to be Peter Sellers’ last role. Chauncey offers comforting homilies on the possibility of rebirth, a new Spring, an injection of youthful vigour and vitality, the sudden surge in potency that will be granted by deregulation and the post-Sixties entrepreneurs entering the scene. It is this sense of the Seventies as a terminal point, a generational dying-off and deregulation as a necessary pruning-back, a laying to rest of the sclerotic Fordist compact that will usher in green shoots and infuse the system with young blood that Chauncey speaks to. This is what allows the elderly Reagen to affirm a New Morning in America in his re-election campaign in 84 ( and which would allow Tony Blair to assert a decade later that England is a “young country”).

Chauncey isn’t exactly a parody of Reagen but of a whole tendency toward the idea of the natural man, whose power is precisely his uncluttered, uninflected apprehension of direct truths that the more sophisticated can never attain, dogged as they are by psychological and existential problems, their optimism ruined by experience. This lionization of the homespun, the good plain sense of a true American spirit uncorrupted by doubt and fancy European book-learning will reach its peak/nadir with Forest Gump. TV is the soul of America made visible and Chauncey is its word made flesh. This is why in the final sequence as the Elders discuss his candidature for president we see him guilelessly walk on water, he is superhuman, a redeemer, has a direct unmediated access to the Oversoul, incarnates it. Diana in Network may be “TV incarnate” for Chayefsky (indifferent to suffering and love alike, the phallic witch of the coldest of all cold mediums) but Chauncey incarnates TV as salvation, and what he will save is Capitalism. 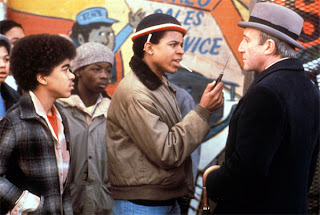 In Network, Jensen’s speech is partly just Chayefsky flexing his stylistic muscles but there is a congruence between Jensens’ style and the emerging business-speak that is soon to inflate into the Gnostic professional rhetoric of the MBA. His speech, in borrowing ecological and environmental metaphors, helps to posit a humane capitalist teleology that then gains immense traction after the collapse of the Soviet Union in 1989 and informs the Third Way of Blairism and the Clintonite ethos of the 90s. Jensen’s “system of systems” is a new form of sublimity, a global vision of capital that supplants the natural world. In this way the rhetoric of capital steals something from the Romantics, this is both a more aggressive assertion of “ capitalist realism” and also a more benign vision, capital itself is the sheltering mother, the pathetic fallacy gone free-market, Chauncey is its avatar.
Posted by carl at 12:38

Reagan's legacy (that is the dumbing of USA "culture") is brilliantly described by Morris Berman in Dark Ages America, and other later books too.

Whoops should have been contents not contensts

That link doesn't open, but Reagan was tapping into a much older strain of American reaction/repression back when he was canvassing for Barry Goldwater. The 'dumbing' has always been present, it's just that 'smarter' elements got pushed beneath the mainstream when financial/military agendas had no more use for it.

Finally got round to reading these. Don't have much to add other than to give props for the beautiful writing.