The Moon Represents My Heart

"'The Moon Represents My Heart' [was] something completely new. So people of my generation were suddenly infected with this very personal, individual world. Before that, everything was collective..." – Jia Zhangke

It’s a measure of how little we know about Chinese culture – rather than the geopolitics of China – that this beautifully syrupy song is an obscurity in the Anglophone world. Rather than the gongs and zithers of kitsch TV sound libraries, the first music that comes to mind when we think of China should be something like this:

This song should be on karaoke playlists across the land, it should be murdered on every series of X Factor. It should take its place alongside Chinese Girl and Mao’s Little Red Book as totems of China as seen through the West’s 70s. We deserve to be sick of this song.

Luckily, unlike so much pop detritus, we don’t have to forget the received wisdom about it to recognise its beauty. 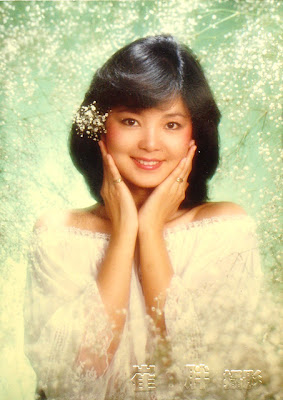 I’ll end with a brief biographical sketch. You don’t need it to enjoy the music, but here it is. Deng Lijun (aka Teresa Teng) – as intimated by the above quote from director Jia Zhangke – was one of the first of a new kind of singer that arrived after the Cultural Revolution. She not only sang individualistic love songs, she was also an internationalist, singing in Cantonese, Japanese, English, Korean, Taiwanese, Indonesian and Vietnamese as well as in her native Mandarin. She died young, only 42, of an asthma attack.

Teresa Tang hovers over the delightful late 1990s Hong Kong dramedy, "Comrades: Almost a Love Story", (with Maggie Cheung and Leon Lai) about two people who come from the countryside to Hong Kong, meet, fall in love and eventually get together later in New York City.

The protagonists get the great idea of buying cut rate Teresa Tang tapes to sell during the New Year's celebration, but no one will buy them, and they lose a lot of money, not because people in Hong Kong don't like Tang (in fact, many adore her), but because to buy a Tang tape publicly is to expose one's self as a rube in this pretentiously urbane city.

The two later reunite in NYC years later as one, and then the other, watch an announcement of Tang's death on a television through a storefront window in New York Chinatown. With its emphasis upon the get rich quick sensibility of Hong Kong in the 1990s, and the emotional consequences of delayed personal gratification that result from it, the film is, interestingly enough, an Asian companion to Fassbinder's "The Marriage of Maria Braun".