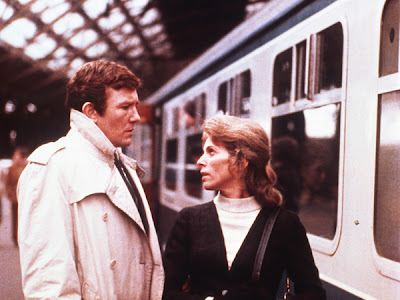 Stephen Frears' debut feature Gumshoe is something of an oddity in British cinema - caught somewhere between kitchen sink, 70s neo-noir and the genre reflexivity of the French New Wave. Albert Finney plays Eddie Ginley - mentally ill, unemployed, but playful and charismatic enough to live out his fantasy as a Chandleresque private eye. Against a backdrop of documentary-ish realism (rare that its Liverpool locations are actually what they say they are), he finds himself drawn deeper into the world of murder and drug trafficking. Through one character, we have glimpses of the following decades' epidemic levels of mental illness, the encroaching gun/drugs trade, welfare dependence, in-family class antagonism, racial conflict (its rarity on TV apparently due to Eddie's then-common racial insults), and the consolations of mass entertainment. It's as though Arthur Seaton, estranged from industry, community and family, has sunk into mental illness, and is now attempting to recover by switching genres. Or he may just be another deluded Scouse Quixote.

As with many a disillusioned northern male, Eddie's main defence against mental illness is fantasy, largely manufactured by Hollywood. In his fractured, disappointed life, a sense of the cinematic gives him the continuity he craves. It's fitting that Eddie, when not acting as a private eye, moonlights as a nightclub entertainer at 'The Broadway'. Whether talking to the dole, his doctor, or sister-in-law (Beckett favourite Billie Whitelaw as a lost love), the mid-Atlantic showbiz schtick rarely lets up. Those who know him accept this as part of his illness. In the criminal underworld, it's regarded as serious (like entertainment, a world where bullshit is the highest truth). 'Thriller' music (composed by Andrew Llloyd Weber!) jarringly intrudes on the environment in a manner that would make Jean-Luc Godard proud. As with Godard's Paris, or the Newcastle of Get Carter, noir photography doesn't work too hard against the natural murk of the location. It's a film of wistful regret, but holds back from reassuring nostalgia. The uneasy blend of comedy, tragedy and thriller may be why this film usually gets short shrift in considerations of Frears' ouvre. If we were to apply any 'auteurism' to his films, it's the sense of disillusion and quiet desperation shared by almost all his lead characters, not least in their pursuit of a 'game' (from Bloody Kids to the bloody Queen!). He can bounce between genres, classes, nations and centuries with such ease because the discontents of 'playing the game' can be applied to almost all situations. As for Finney, it's notable how he swung from the post-war grime of Nottingham, to the mid-Atlantic technicolour of Tom Jones and Audrey Hepburn, and back down with a graceful bump to the mean streets of Toxteth. Never as graspingly ambitious as Caine or Connery - but far more talented - he has successfully avoided institutionalisation.

What Gumshoe captures brilliantly is the distinct peculiarity of Liverpool. Even as '2nd City of Empire' it was hardly in line with the traditional industries of northern England. By the 70s, it occupied a space that was in many ways a foretaste of the north to come. Long before Billy Elliot and The Full Monty, Liverpool attempted to transcend declining industry and its miseries through sentiments of entertainment and pop success - the gloss on an insecure service economy. Eventually branded as 'culture', it was of a piece with the self-negating idolatory of Cool Britannia. As a once-thriving port, Liverpool's early proximity to American pop culture is widely documented. Less so is the strange sense of dislocation from mainstream England this arguably led to. In the 21st century this dislocation is far more mainstream. Following WW2, American pop culture promised escape, glamour and pizzazz to a restless working class. The 70s was when America led the way to social fracture, ideological confusion and neoliberal aggression. It wasn't that Liverpool 'fell behind'. Maybe it was just waiting for the rest of the country to catch up.
Posted by David K Wayne at 15:24

I often pair this with "Get Carter" in my mind. I think Liverpool and Newcastle look quite similar in the two films. They both seem quite deserted, which I suppose is due to filming being restricted to early mornings or Sundays.

In a way, both films are shaggy dog stories (although GC's violence tends to belie this), with Ginley and Carter both being basically chumps who stumble on unravelling events through a series of accidents/coincidences.

It's interesting that most of Caine's late-sixties/early-seventies films feature him as a dupe - streetwise and calculated, sure, but still always the last to figure out what's going on.

Maybe his limited facial expressions make him suitable for blank, bewildered characters? To me, he always seemed too dozy to convince as a spy.

I dunno, I've always quite liked Caine as an actor - his expressions are certainly limited, but there's always a glimmer in his eyes that expresses his intentions. He gives me the impression of a real person who has wandered into the film by mistake.

But the Harry Palmer films, "The Magus", Carter, "Pulp", "Play Dirty", "The Black Windmill", even "Alfie" he's groping in the dark most of the time. Actually "Pulp" has much the same premise as "Gumshoe".

Perhaps Noir/Neo-Noir needs a reasonably astute everyman "hero" in order to lead ourselves the audience into the web of deceit. Almost as though we're invited to think "ah this guy seems like he knows what he's doing, there's no way he's going to allow us to be fooled alongside him."

Personally, I can't stand Caine (except Get Carter). He has to be the most overrated British actor ever (even Jeremy Irons is forgotten nowadays - there's no escape from Caine!).

Even 'Alfie' just seems like a 'swinging' mid-Atlantic remake of 'Saturday Night Sunday Morning' to me.

Well, I guess we'll have to agree to disagree on this. My own sense is that your opinion is nearer to the critical consensus, in that I don't think his reputation as an actor has ever been that great.

On the other hand, the films that he appeared in still seem to resonate in the present day in a way that other films of the era don't. I recently saw "The Spy Who Came In From The Cold", and Richard Burton's performance seemed really quite old-fashioned in its overwroughtness. Caine would have given a much smoother performance, and I would have found it much more watchable.

That said, I can understand how Caine-the-person would irritate the hell out of anyone.

Well, Caine seems fairly popular with the public (and his shameless networking got him a LOT of opportunities in Hollywood - 2 blaahdy oscahhs?!?). His 'non-acting' kinda makes his roles inseperable from his insufferable public persona. He's also been in some of the worst films ever - like Richard Burton.

Compare Finney's interesting, underrated 'Wolfen' to the excruciatingly bad 'The Hand' (both early 80s b-horrors) and it's clear how little Caine has to offer, except chutzpah and relentless self-promotion. Even in fairly good films, like the Quiet American, I can't help but run through a list of actors who could have done it sooo much better.

Ah yes "Wolfen". I remember "Looker" being very good as well. That said, I think Finney was bloody awful in "Erin Brockovich".