When the cussing has to stop 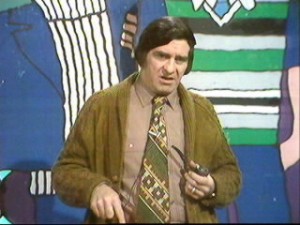 Help me, for I have become obsessed with 'Indoor League'.

Everything about the show mesmerises me: the fear behind Fred Trueman's oh so casual introductions, the Quaker Oats coloured faces, the Dickensian names, the couldn't care less hair, the relentless Yorkshire-ness, the fat beer glasses, dense knits and thick lenses, the intense concentration.

This is serious stuff, with cash prizes, which may be why everyone gives these pub pursuits the gravitas of the Heraclean games, insisting that they require superhuman skill and a degree in physics. Listen to the darts commentary with its emphasis on the uncanny, otherworldly accuracy / sheer monotony of two fairly average darts players as they take an eon to get down from 501, and the commentator's odd obsession with the physique of contender Colin Minton ("he's a heavy boy...").

So, here's a long clip, but one that deserves to be watched in its entirety. It tells you more about Northern life in the seventies than any sociological study, and more about table football than you thought there was to know.

If you're wondering about the dart board, it is, of course, a Yorkshire dartboard - no nonsense, no trebles and no bullshit outer bull. I'll see thee...
Unmann-Wittering.
Posted by Found Objects at 01:20

Always hard to tell at this distance what's natural and what's an act for the camera. The fear you sense behind Fred's eyes perhaps bespeaks that as a young bowler he was, reputedly a sensitive character who required mollycodddling and talking up to perform at his best. The professional Yorkshireman is a role I guess he was more secure in than "being himself." I agree also about the extent to which very average darts players and tablefootball players are presented as experts here [anyone who's seen French or Dutch teenagers hogging the Babyfoot in a campsite bar will know how 'ordinary' the Indoor League players are]. However, I also wonder if this overstatement of attainment is such a bad thing. Middle-class parents do it to their kids all the time and whilst profoundly irritating it does seem to insulate people against life's harsher exigencies and Lord knows, IL's protagonists would need that in years to come.
Also - it was very masculine wasn't it? Suggests that there wasn't a huge cultural gap between the Student Union and the Working Men's Club.
Finally- it's exactly the sort of thing the "Snobby [aspirational] Poor" wouldn't have watched. I grew up in Yorkshire in this era and had never even heard of this programme - we wanted to get out of this environment, not wallow in it!

From the days when regional programming consisted of more than a weekly half hour news programme, and when cultural homogenisation was just starting to take hold in Britain. I'd love to know who pitched the idea, and who researched it; was it someone with WMC connections or a gang of slick young researchers who now own their own production companies?

There we have it! Only a person with a background like that could hustle through a programme like this!