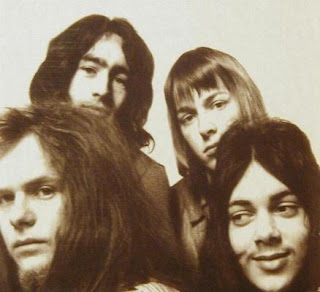 There were few more important bands in the 1970’s than Free, and even fewer whose significance has been so underestimated or misunderstood by posterity. Lyrically utterly conventional, sonically they were revolutionary. An acknowledged influence on Gang Of Four and U2, their clean, plangent dynamics can be heard all over post-punk. Not only were they the first modern band, they were also the first truly European one. Starting at a remarkably young age, they would complete their first two albums while still in their teens, evolving a sound that was unlike anything that had come before.

The key to Free’s sound is their innovative conception of space. The early beat groups had followed the rock’n’roll template of layering their instruments on top of one another to create an incoherent adrenalin rush. Later innovators like Hendrix and The Who would create a more dynamic sense of space by weaving instruments in and out of the mix, provoking a giddy feeling in the listener of the sound arriving and disappearing at oblique angles. The spaciousness in Free’s music was of an altogether different conception. It is almost as if the four players (Rodgers’ voice was very much an instrument) occupy a separate corner of the studio, as though at the apexes of a rectangle. Each one then democratically adds their playing to the mix, without either dominating or surrendering to the others. At all times in the music, each instrument can be clearly picked out in a patient give-and-take that is the antithesis of the frenetic American rock’n’roll that originally inspired it.

The result is a music of clean, clear, angular surfaces, in which Simon Kirke’s unfussy, metronomic drumming provides the deep-piled foundations for Andy Fraser’s sensitive, tentative bass and Rodgers’ misty vocals. Most remarkable is the guitar playing of Paul Kossoff, which, forever weighing the balance between restraint and cathartic release, is at times almost impossibly piquant. A tragic character even by the desperate standards of rock music, Kossoff was an utterly broken man even before he had left his twenties. By the time of the band’s last coherent album, 1970’s "Highway", he had started playing on a different page from the rest of the group. A perfect example is on the opening "Highway Song", in which he interrupts a wry, jaunty exercise in nostalgia with a brief solo of almost cosmic grief. The effect is like stepping out of a caravan and finding that it’s been parked in a cathedral.

Free would struggle on for three more years, recording and touring as best they could between Kossoff’s illnesses, but their career was effectively over. Even so, there would be further moments of greatness that rewarded their doggedness. Never having quite fulfilled their vast potential, they split in 1973, with the tough professionals Rodgers and Kirke forming the kernel of the slicker Bad Company, while Kossoff and Fraser were left to make their own tragic and (in Fraser’s case) ultimately heroic journeys.

Another great post Phil (sorry for giving Carl credit for the last one, doh!), you priase Free but also, i feel, maybe apologise for them a bit. Always strikes me how incredibly similar Free are to Zep.

That's funny really, because I see Free as being almost the diametric opposite of Led Zeppelin. They're smooth and measured in comparison to Led Zep's freneticism. I don't really like Zeppelin at all to be honest.

I wouldn't think I'm apologising for Free, but I suppose I am pleading for them. Their self-titled second album and "Fire And Water" are absolutely beautiful records, but I'll admit that from then on their output was (for obvious reasons) extremely inconsistent.

i love the idea of taking Free as Neu! avant la letter

but they don't seem European to me

still, I wonder if aren't at least a few American precedents for a cool, controlled, spacious take on bluesy hard rock

Certain things by The Doors?

even the odd thing by Canned Heat or Steppenwolf maybe

but supporting your thesis the polar opposite of Free at this point would be something like Grand Funk Railroad pre-"We're An American Band"... hot live band (supposedly), atrocious records... British rock bands knew how to make records that you could "see"

Errr....well I'm planning to write something about The Doors, who I think are an amazing band sound-wise, but their spaciousness is very much enclosed, cavern-like, Arabian. Free are much more abstract, geometric.

I suppose I'm calling Free European, in that they're musically quite clinical, like they took the roundness off the Blues and made it quite automatic-sounding. I think the sheer metronomic accuracy of Kirke's drumming has a lot to do with this, actually. The first time I heard "Fire & Water" (the l.p.) it actually reminded me of Television - very clean and linear. It was only the thematic carry-over of the bluesy lyrics that made it sound as though from an earlier era.

your post is being discussed over on Metafilter
http://www.metafilter.com/97847/Lots-of-Space

Great intro to free's stuff, though perhaps a bit overblown rhetorically. Frankly I don't think you have to put them in a tradition with Television and Gang of Four--the space and the simplicity is more in line with the JBs and Booker T, overlaid with some Mothers of Invention SF noodly melodies. Foreigner and Whitesnake are just as much descendants, though of course so are the Black Keys.

"Overblown" is my middle name.

I dunno, I think there's something very controlled about Free that really is different from their contemporaries, but similar to the new wave/punk acts. Free never really rock out, they just pretend to.

On the surface they are very similar to their contemporaries (and I'm sure they considered themselves to be the absolute apothesis of authentic soulfulness), but structurally they seem to me to be very different.

"still, I wonder if aren't at least a few American precedents for a cool, controlled, spacious take on bluesy hard rock"

Bo Diddley! So refined in its sparseness it sounds like sampling.

In fairness though, Bo Diddley was such a genius he could have probably written a song called "Bo Diddley's Post-Punk Anticipatin' Dub-Spacious Blues" and been done with it.

I mean, he completed The History Of Rock before everyone else even started it.

I like the comparison with Booker T & The MGs - Free always sounded as technically proficient as a studio 'house' band, and I like the dry, separated sound of their albums. But what puts me off listening to them is the whole 'baby / breakin heart / goin nowhere' type lyrics - they seem to lean on the blues a bit too much which stifles their own voice (I think of them as a 'rock' version of the Yardbirds). And when all's said and done, they did it at a ridiculously young age and looked great. Bastards.

I interviewed Jean-Hervé Peron from Faust last year and he mentioned Free (along with VU, the Mothers) as a crucial early influence.