“All blokes are that sort of bloke.” 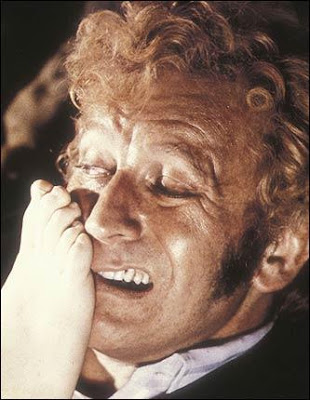 Hitchcock’s 1971 Frenzy is a notoriously grim bit of work. Low budget and relatively low-key in comparison to his films of the Sixties, Frenzy deserves to be considered at length, and will be elsewhere.

The film that shadows Frenzy is Alfie, not least because Michael Caine turned down the role and because Barry Foster who plays the murderer Rusk bears such a strong resemblance to him. Foster was apparently cast on the basis of Hitchcock’s having seen him in Twisted Nerve but surely his close resemblance to Caine (though he has a sharper, shrewder, more shark-like face, Caine’s aura of psychopathology comes from the knowing deadness of his eyes and a bland, slightly dandified prettiness) is key to where Frenzy situates itself in regard to the Swinging Sixties. Frenzy amplifies Alfie’s casual misogyny, the barrow-boy made good who lacks the restraint/decency of down-on-his-luck ex military man Blaney, played by John Finch, fresh from wading through buckets of blood for Polanski. A salt-of-the-earth type whose villainy is masked by his beguiling mateyness the film can’t quite decide how it feels about him. The rape and murder is especially horrible, yet the later scene in which Rusk tries to retrieve his pin from the hand of the murdered barmaid Babs is played for dramatic tension and incorporates elements of slapstick such that there is a strong identification with Rusk’s “plight”. The film is conflicted about Rusk, there is a certain envy, anger that the liberated proles might be getting away with too much, but also certain respect for their being able to act on their desires. The final sequence, in which Rusk is finally caught, carries a half apologetic tone. Sorry old boy, fun’s over, I’m afraid. The rapist and murderer as a loveable rogue.

If we see Hitchcock as very much a 'Hollywood' director by the 70s, its strange how 'foriegn' directors had such a brilliant grasp of Britain's murky textures and power relations, from the east European emigres, to blacklist exiles, to New York luvvies like Sidney Lumet.

A case in point being '10 Rillington Place', directed by Michael Fleischer (not exactly one of the 'greats'), with it's relentless depiction of the relationship between Christie and Evans, and the dank, cramped world they live in. I still find it dificult watching Sir Dickie being nice at awards shows.

Hard to explain, but very few British filmakers seemed prepared to actually 'smell' the country. Even 'realists' (?) like Shane Meadows and Hanif Kureshi give off too much of a disconnected am-dram vibe.

Alan Clarke was yer man, though, wasn't he?

I have to say the mention of Barry Foster has given me the diabolical urge to write about "The Wild Geese".

I think an assessment of Lewis Collins' career is in order too.

Yeah Clarke was the man - he was a schoolyard favourite, once we grew out of Star Wars.