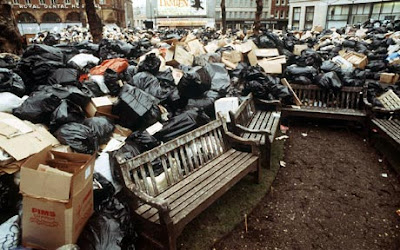 For whom was the Seventies a period of crisis?

Fundamentally, it was a crisis of Government, a crisis of confidence. Squeezed between the Unions and the liberalizing markets government is the battered and increasingly redundant buffer Zone/mediator between institutional labour and global capital. Its position increasingly untenable it opts, with Thatcherism to relinquish it’s own power fully to markets rather than be subsumed into the unions. Here Government looks like just another marginal special interest group, along with the petty bourgeoisie, the aristocracy and the armed forces who want to hang on to their role/prestige in the face of the two major interest groups threatening to “control” the country in their stead. A run on the pound when a labour government gets elected is a direct assault on labour by capital, government gets sick of being the proxy, the ones who have to try and mediate this antagonism to everyone’s advantage, forever holding the coats and looking out for teacher while the big boy’s fight. There is something naked and essential in 70’s class conflict that means it can’t be looked at directly.

The naive question is: what would Britain look like if it had gone the other way?
Posted by carl at 14:20

I have just installed iStripper, and now I can watch the sexiest virtual strippers on my desktop.