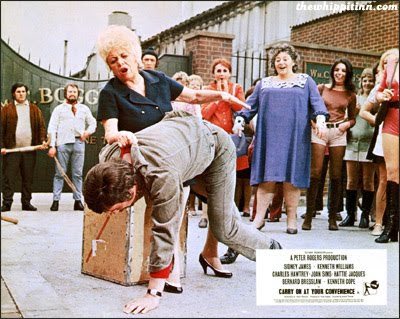 Unlikely as it may seem, the end of 1971’s deeply unpopular “Carry on at your convenience”, (a film which took years to recoup its budget instead of the typical weeks or months in which the popular series usually went into profit), contains one of the cardinal images of the early seventies, a superb foreshadowing of Thatcherism.


The films central villain is Vic Spanner, a shop steward resented by all the employees of W.C. Boggs, especially the workers themselves who, recognizing that "we’re all in it together” are keen to get on with making Britain great by toiling away at the production line and whose patriotic, proletarian zeal Spanner scuppers with his excessive, though finally hypocritical and self-serving militancy. The strike he calls is eventually broken by the workers themselves who, after a works booze-up, recognize that their own interests are identical to those of the bosses'. In the climax Spanner’s mother, a tough, no-nonsense, middle-aged blonde with social aspirations puts her fully grown shop-steward son over her knee and spanks some common sense into him.