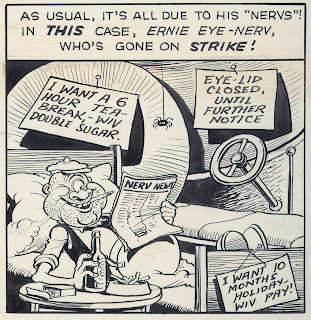 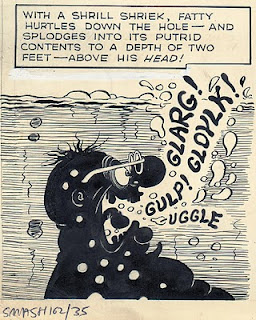 Before Neoliberalism and its products, the world could appear as a huge, nerve-wracking, fleshy mystery to many kids; and British cartoonists were willing to keep up that appearance. Here's some comics by the brilliant Ken Reid, creator of Faceache, Roger the Dodger and Jonah (the inept lowly sailor forever sinking ships - an allegory for the decline of Empire?). From the pages of 70s British comics like Smash, Buster and Whoopee! In comics, everyone's dad had a moustache and adult characters actually went to work (albeit to piss about or have fights for most of the day). Where there was only one overweight kid in school (simply named 'Fatty') and it was considered cool to burp creatively, or do something disgusting with your face. From the days before British comics settled into cynical TV/toy tie-ins, the punky brutalities of 2000 AD et al, and the knowing deconstructions of Viz - all responses to the shock of Thatcherism in their own way. Now British kids are trained to demand more expensive entertainment (with the resultant difficulty in singling anyone out as 'Fatty'), comics are as dead as our mining industry. 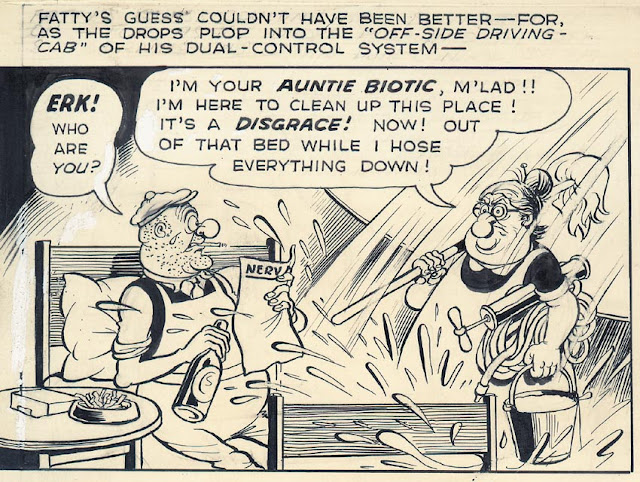 Above is The Nervs, a variation on a recurring 70s theme of body-as-industry; seen also in the strip The Numskulls, a few Sesame St. sketches, and the final segment of Woody Allen's Everything You Wanted To Know About Sex. This being the 70s, the functions of the body politic were subject to industrial unrest, class-based rivalries and frequent malfunction. The threatening ointments and medicines introduced (by management/brain) may have been an allegory for necessary trouble-shooting, but readers were generally invited to root for the entire body, even its germs. IPC Publications, a notoriously exploitative employer, wasn't so benevolent to Reid himself. In 1987 he dropped dead while drawing his long-running Faceache ("The Boy With The Bendable Bonce!"), an already-ugly kid who could change into monsters to ward off snobs, bullies and pompous, cane-happy teachers. Like a class-war version of The Incredible Hulk (no nuclear physicists for 'brain drain' Britain). I can't help but wonder if Reid popped his clogs to Faceache's own wonderful sound effect: "SCRUNGE!" 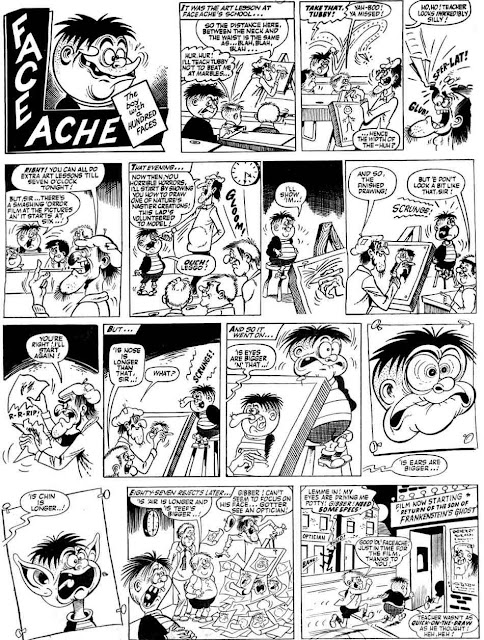 Not as well-known as Leo Baxendale (some of who's strips he took over), I'd say Reid was better; not least for the queasy aura of violence and bodily trauma that permeated his nevertheless chirpy work (an unease present in much British comedy). His style still makes me laugh, with its oddball language and general tone of working-class insolence. He's been cited as an influence on po-mo comics polymaths (and IPC alumni) Alan Moore and Grant Morrison, especially for his surreal body-horror and defiantly malformed  characters. Maybe he was even an (unconscious?) influence on fellow Mancunian Mark E. Smith. Back-page fillers 'World Wide Weirdies' (below) were almost Lovecraftian; with an added layer of subtle satire. As suggested by the name, there was a general theme of human hubris adrift in a sinister, unknowable world. Had he been American, I expect his grotesque, agitated style would have thrived in underground comics like Robert Crumb's Zap or Art Spiegelman's Arcade. Even with the decline of British comics, he would have found an outlet for his considerable talent. 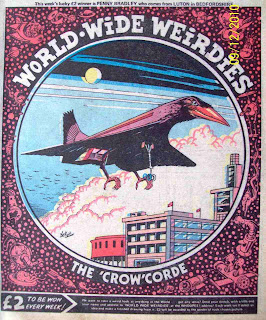 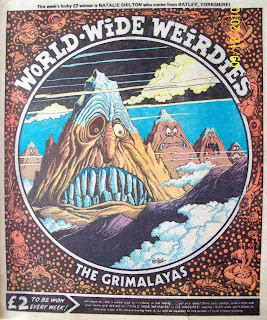 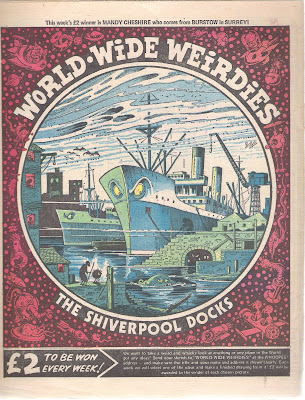 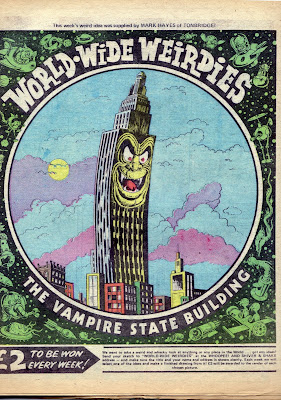 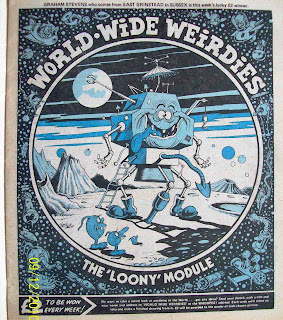 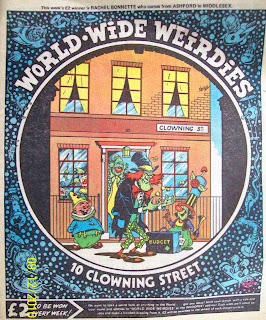