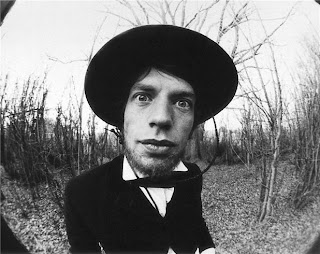 "What would England do if America declared war and hoisted a green flag, as it is all Irishmen that has got command of her armies, forts and batteries? Even her very life guards and beef tasters are Irish. Would they not slew round and fight her with their own arms for the sake of the colour they dare not wear for years, and to reinstate it and raise old Erin’s isle once more from the pressure and tyrannism of the English yoke, which has kept it in poverty and starvation and caused them to wear the enemy's coat? What else can England expect?"

Undoubtedly one of the most derided films of the 1970’s was Tony Richardson’s biography of the legendary Australian outlaw Ned Kelly. Dismissed by both its director and its leading star, it functions nowadays as a kind of mysterious void in the story of The Rolling Stones, as though all the dark forces that Jagger played with in his debut feature film Performance came back to torment him in his second outing. Almost from the start the production was dogged by problems, including a protest by Australian Equity at the importation of Jagger, numerous injuries to cast and crew, on-set fires, and the attempted suicide of Jagger’s girlfriend Marianne Faithfull, who was originally intended to play Kelly’s sister.

Ned Kelly himself is Australia’s greatest folk hero, and a figure who still today invites no small measure of controversy. The Outbreak of his gang in the Victoria of the 1870’s remains fascinating because it was as much fuelled by an anti-authoritarian nihilism as it was by criminal opportunism. The episode has all the qualities of a small war, something emphasised by the iconic suits of armour the gang fashioned for themselves in their final shootout at Glenrowan.

Mick Jagger was always a curious choice to play Kelly, being neither Irish nor Australian nor even an actor, and his performance invited scorn in any number of ways. Australians were outraged at his adoption of an Irish accent for a man they considered to be a true-blooded Australian. The Irish scoffed at his curious brogue that seemed to wander all over the Bush in search of an authentic tone, while the critics derided his attempt to adopt an accent at all, and noted that it frequently fluctuated between Irish, Cockney and modern Australian within the space of a single sentence. What nobody noted though is that we simply have no idea how a second-generation Irish-Australian spoke in the mid 19th Century, and so Jagger’s accent in Ned Kelly didn’t invite the same authenticity issues as, say, James Coburn’s in A Fistful Of Dynamite.

Jagger’s slight build was considered to be inappropriate for the role of a burly bushwhacker, and this is reflected in his interpretation of Kelly’s character, which is shifty and distracted rather than blunt and forceful. It is in this respect that we can start to understand why Richardson cast him in the role. Nowadays it is difficult for us to recall that Jagger was once considered to be a very dangerous individual indeed, but a great deal of that antinomian charisma is preserved in Ned Kelly in a way that it isn’t in archive footage of The Rolling Stones or even in Performance. There is something in his gimlet eyes and distracted smirking that suggests that Jagger, as Kelly, really is capable of stirring up a hornets’ nest of trouble for those in authority. Perhaps Richardson saw this in Jagger’s portrayal of another Irish reprobate, Oscar Wilde, in the promotional film for the Stones’ We Love You. There’s a sense in Jagger’s performance as Kelly that he is always thinking, always looking for a means to finesse his ever-deteriorating circumstances.

In many ways the opportunities that the critics had to poke fun at Jagger were advantageous in that it meant they didn’t have to engage in the film’s uncompromising politics. Ned Kelly contains some of the most open Irish Republican proselytising in 1970’s cinema. Beyond the Jerilderie Letter, there is continuing debate about the extent to which the real-life Kelly’s actions were politicised, with persistent rumours that his bank-robbing activities were ultimately intended to establish a Republic Of Victoria. The film reifies these rumours and depicts Kelly as a solid class-conscious Republican with the rhetoric to match, turning him from an outlaw to a revolutionary, and makes no attempt at "balance" in portraying his struggle within the colonial authorities. It was plainly a film as much about contemporary Northern Ireland as about Victorian Australia, and like Paul McCartney’s Give Ireland Back To The Irish, was an example of popular Republican sympathising that was quickly and conveniently consigned to the memory hole. Despite the exaggerations of the film, underlying the real case of the Kelly Gang were, however, genuine issues of land ownership and distribution in the Victoria of the mid-19th century, and it’s interesting to note that one of the indirect results of the irruption of the Kelly Gang was reform of the State’s Land Selection Acts and police force.

There are few countries whose landscape is more sympathetic to cinematic photography than Australia, and Ned Kelly is up there with the best in terms of its rapturous cinematography. Richardson was an excellent director, and keeps the story moving along efficiently, effectively, and often with considerable flair. More than any Rolling Stones record, however, Ned Kelly marks the end of Mick Jagger’s days as a bohemian nonconformist. Undoubtedly stung by the hostile reception that greeted the film, he would return to acting only gingerly in the ensuing decades. The Stones themselves, who had become predictably dissipated in his absence, would be whipped back into shape and turned into a lucrative touring business. The film had been a disaster in both his personal and professional lives, and he would no longer be taking any risks with his career. Ironically, Ned Kelly, an excellent film, was to turn Jagger from an outlaw into an entertainer.
Posted by Phil Knight at 12:18

Email ThisBlogThis!Share to TwitterShare to FacebookShare to Pinterest
Labels: Folk Heroes, Mick Jagger, Ned Kelly, Northern Ireland, The Rolling Stones, Tony Richardson, Why you should never listen to the critics

Impressive defence of the film. But Mick's fish-eye chops made me LOL.

If I ever catch it on TV again, I'm gonna squint my eyes and pretend he's Ian McShane...

I dunno, I though he was really OK in it. It's possibly because I was braced for much worse.

I think he was way more ridiculous writhing on the floor in that Rock'n'Roll Circus thing. Especially after The Who had shown them how it should be done.

I keep intending to do a post on another 'bad' rock actor - David Bowie (esp. Man Who Fell To Earth), and why he's only good when he plays non-humans (there's a lot of actors who are at their best when they don't play 'people'), but I expect someone'll beat me to it.

I love David Bowie the actor. "Merry Xmas Mr. Lawrence" was the best film of the 80's.

It's possibly because I'm no great fan of Bowie the singer. But yeah, expect a post on "Mr. L" soon.

Bowie AND Ryuchi Sakamoto were awful in that - and I quite like it! Look forward to your post on that one.

ha! im also a big Mr L fan...takeshi kitano is however the real star of that movie