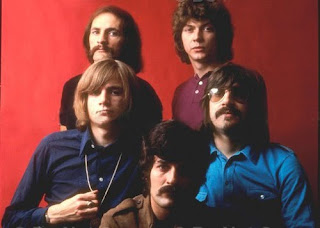 Pop history is a fickle creature in whom she chooses to remember and not to remember, but there can be few bands considered so mighty in their time and who evade contemporary consciousness so thoroughly than The Moody Blues. I can only think of one reasonably recent band that might conceivably have approved of them, and that would be the equally reviled Cast. Even the synthesised kitsch-hounds who resurrected the likes of ELO and Supertramp have given them a wide berth.

The Moody Blues were huge in the late ‘60’s and early ‘70’s, and a genuinely fascinating phenomenon. Looking like time-travelling Edwardian TV detectives, in many ways they are the closest any rock group has come to approximating a real religion - they were more of a gestalt therapy cult than a band. They’re also difficult to "get" nowadays - their vision was as cosmic and grandiose as that of their fellow Brummies Black Sabbath, and yet it was as different as it was possible to be. If the Sabs imagined a universe of pain and suffering ruled by a morose, indifferent God, the Moodies evoked a cosmos saturated with meaning and love.

This is where the difficulty with The Moody Blues begins. There’s no "attitude" about them at all. Their fundamental aesthetic was one of healing, and their music quickly brings to mind the pastel-coloured walls and crayoned pictures of rainbows that one associates with Evangelical churches and centres for recovering alcoholics. What they make you realise is how much, since the ‘60’s, and especially since punk, listening to music, whether Metal, Hardcore, Hip-Hop or Grime, has become a punishing experience. Listen to "Tuesday Afternoon" below (their fan videos invariably consist of fractals or etherial pictures of nature). You’ll hate it. It’ll feel like being drowned in saccharine. You’ll curl your lip and understand just what inspired Johnny Rotten. And then, within a couple of days, just when you least expect it, the melody will sneak back into your memory and you’ll realise how magnificent it is.

In many ways The Moody Blues’ aesthetic was based around a simple refusal to acknowledge the end of the Age of Aquarius and the birth of the squalid Seventies. The band had bought into flower power more heavily than any other British band, recording tributes to Timothy Leary ("Legend Of A Mind"), Yogic meditation ("OM") and telepathy ("The Best Way To Travel"), and perhaps because they hadn’t actually involved themselves with the accompanying drug culture, thought it a great and worthy cause to live their lives by.

It’s easy to see how the damaged burn-outs and drops-outs that spilled into the desolation of the ‘70’s could find sanctuary in their music, but the literal worship that they received from their fans was disturbing to the band themselves. People attended their concerts to heal physical ailments and witness miracles. A core of their most ardent fans firmly believed that the band were benevolent aliens from a faraway planet. Certainly they possessed an almost inhuman capability to avert their gaze from the filth of human existence, and conjure up a lovely melody. 1970’s "Question", inspired by the Vietnam War, was perhaps the nearest they got to acknowledging the confusion that surrounded them, and the nearest they got to expressing anger. Other than that though, their music was pure balm.

You should start off by just dipping the occasional toe in it, though……
Posted by Phil Knight at 23:37

and if it weren't for Fleet Foxes and a few other young beardies namechecking them, probably Crosby Stills & Nash would be in this category

Deep Purple are another group who don't seem to have endured, when once they would have been level-pegging it with Sabs and Zep

still you will hear Purple, CSN&Y, and Tull on classic rock stations in the States now and then, whereas i don't think I've ever heard Moody Blues

i had no idea they had such a cultic following

I used to think that about Gang of Four and a fair few post-punk acts, but that re-emerged in a big way (disco too). Why is it AOR doesn't get this? Even in the age of the internet? Is it the process of myth-making, looking back on cultural context, or what young musos are likely to emulate?

I think Deep Purple are a genuinely great band, and probably ripe for a revival, but I've never really listened to Jethro Tull - their name always conjures up that Cornish comedian in my mind.

As for BS&T, well the name Al Kooper, like Albert Hammond, just seems to crop up again and again in articles by old Rolling Stone journalists, and because they're somehow connected with the dreaded Bob Dylan, always ward off my interest.

What's interesting about the Moodies is if you go onto Youtube, there's so many comments under their videos from people whose lives seem to have been turned back from the brink or repaired by listening to them, something you would never get from "cool" bands, and it's this healing holism which is I suppose what makes cynics like me uncomfortable with them, which is why I can't quite (yet) fully endorse them.

I actually have a theory that this kind of holism, also propounded by the likes of Earth, Wind & Fire and Tangerine Dream for example, is probably the most politically radical kind of music (because it attacks the Cartesian Dualism that Capitalism is just the social manifestation of) while the likes of The Stooges, Sex Pistols, Nirvana, even my beloved Stranglers, are the reactionaries because their nihilism amplifies the alienation the subject/object dualism provokes.

And maybe that's why the Moodies stuck with flower power - a world infused with love is more dangerous to an atomised system than a world of nihilism and despair.

Perhaps we should stop punishing ourselves?

Interesting you mention Earth Wind and Fire in those terms - they were one of the biggest bands in the world in the 70s (I loved them as a kid). But now they're semi-forgotten, or treated with 'ironic' detachment if they're played in clubs etc. They actually seem to make people vaguely uncomfortable in a way that the darker Funkadelic (for example) don't. At the time EW&F were highly revered and respected; especially by other muscicians like Mile Davis (who interestingly seems more respected for his more uglier, nihilistic, 'ill' stuff now than he was when he was alive).

Their record sleeves make ELO's look like models of restraint, though.

C,mon - gotta love those pyramids! They did David Copperfield tricks onstage too.

More happy accidents. WK, I just caem over here for the first time after talking to you at Qlipoth.

For the last week, I have been thinking about, yes, the Moody Blues. That very having been HUGE and now forgotten. And just like you say, Simon, the thought of them lead me straight to Blood Sweat and Tears and Chicago.

I've just been reading Bourdieu's Distinction and thinking about how inappropriate it is for American apppropriation. The Moody Blues were prime example. HOw disappointed I was when I got to grad school only to find smart hard working doctorands who liked the band. How could they like kitsch and not love harsh Miles?
Looking back, me replicating the elitist model of 'taste,' them enjoying democratic freedom to enjoy. Sigh.

I kinda did the same banishing Fleetwood Mac from my speakers, for the kind of techno I wouldn't go near now.

I have a theory that there's only really a dozen people on the internet, who use it to argue with themselves. If they figure it all out, they sign off and pass on the avatar. You could break all blogs down into 12 basic genres with their respective modes of address to prove this.

When bloggers claim they've actually met each other, I reckon its an occasional ruse to throw the other 11 people off the scent...

If you're talking Moody Blues, what about Procul Harum, a band I always associate with them? Another band that was quite huge in their day now only remembered for one hit.

Jethro Tull on the other hand may not be commercially that succesful, but long since reabsorbed in the rock pantheon. Prog rock as a whole has been rehabilitated quite succesfully in the last decade, but more mainstream AOR hasn't yet...

Yes, and there's The Hollies too, who are currently arousing my interest.

"He Ain't Heavy, He's My Brother" might be the least neoliberal record ever made.