For the British aviation industry, as with British industry in general, the 1970’s were to prove a traumatic period in which the all the hubristic schemes of the previous decades were to unravel in a nemesis that they had long sought to avoid.

Throughout the Second World War, Britain had managed to maintain a slight technological edge over her American allies in aviation, but with victory in Europe achieved, it became clear that Nazi Germany was almost in another league when it came to advanced aeronautical design. The months subsequent to the surrender saw teams of scientists and engineers from all the major Allied countries scouring the former Reich in order to scavenge whatever facilities, tooling, and finished or part-finished designs they could get their hands on. The Americans, with their almost limitless funding, took the cream of the Nazi scientific and engineering personnel for their air and space programmes, while the British, French and Russians hoovered up whatever was left over.

Aviation held a privileged place in British Government economy strategy throughout the post-war years. Partly this was pragmatic, and took into account the contribution aerospace made to the national defence, but it also had an undeniably irrational aspect. Aviation was romantic in the sense that it had deep roots in the mythology of progress and expansion, and in many ways was a projection of the national need for greatness as it experienced the loss of empire, and the sense of impotence and decline that this engendered. If Britannia was no longer to rule the waves, then at the very least it could rule the skies.

The aviation industry itself entered the post-war years full of optimism about its capabilities and destiny. Certainly the giant American aerospace industry offered daunting competition, but British engineers felt more than confident that they could surpass any innovations the Americans could offer. In many ways they were proved correct, for the Americans rarely offered anything technologically superior to the British, despite their vast facilities. What the Americans did do better than the British was to understand the market requirements for new designs, and offer sturdier, less innovative designs that were more tailored to their customers’ expectations. The result was that the British commercial airliner designs would often be spectacular technological successes, and yet equally spectacular commercial failures. 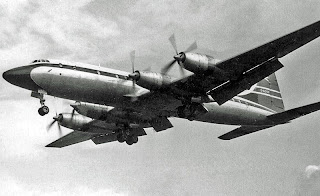 Perhaps the first example of this trend was the Bristol Britannia. Like most commercial aircraft of the period, it was designed to a specification issued by the Ministry Of Supply to service designated imperial routes flown by the British Overseas Air Corporation, the nationalised carrier that had been formed from the pre-war Imperial Airways. This method of procurement, in which BOAC was always the lead customer for new British designs, was problematical in that British manufacturers were ultimately designing to a Government requirement that was often idiosyncratic, and not translatable to the needs of other commercial customers. The aviation industry did itself no favours in offering its services to almost any Government project, no matter how outlandish, that came its way, meaning that it was invariably overstretched. This resulted in many projects being completed long after their scheduled in-service date, and such a delay in the Britannia ultimately proved fatal. Easily the best turboprop airliner in the world when it arrived in service, its era had already been superceded by the jet age. 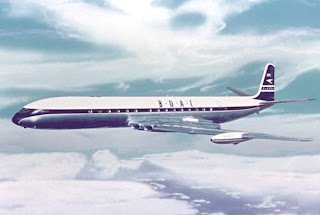 The next debacle was to be the world’s first jet airliner, the DeHavilland Comet. The DeHavilland company was in many ways the darling of the British aviation industry. It’s designs were noted for their experimentalism and flair, but they were also frequently dangerous. When the Comet entered service it was seen as the first step in a world-beating export drive. It wasn’t long though before Comets were disintegrating in mid-air. The problem was traced, after much expensive testing, to the corners of the square "picture windows" that the company had installed to give passengers a better view, acting as stress-raisers. With this problem solved, the Comet proved to be an excellent design with a long service life, but the precious early lead had been lost to Boeing’s capable 707. 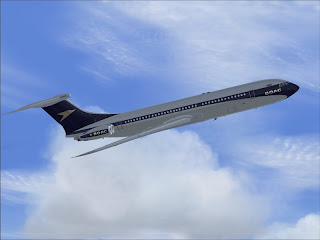 The next important indigenous airliner design was the Vickers VC10, and it was with this aircraft (along with the military TSR2) that the relationship between the Government and the aviation industry began to sour, and become increasingly mired in political strife. Designed to an exacting BOAC specification, the production of the aircraft was delayed when in 1961 BOAC itself requested a reduction in the order number due to an undershot in their predictions of revenue growth. The Government took over part of the contract, and bought VC10’s as liaison and transport aircraft for the RAF, while BOAC chairman Gerald d’Erlanger and managing director Basil Smallpeice (sic) resigned in protest at having to accept even a reduced number of VC10’s. Their rationale, that the national airline was there to make a profit and not support national industry, was an early manifestation of what would later be termed Thatcherite sentiment, and a significant harbinger of events that would enfold over the ensuing decades.

Finally, of course, we come to Concorde. By now the British aviation industry was entering its rationalising stage, as the smaller companies were merged into two large conglomerates, Hawker Siddeley and the British Aircraft Corporation (BAC). Concorde was developed jointly by BAC and the French Aerospatiale company throughout the 1960’s, and was subject to the usual process of delays, technical problems and vertiginously escalating costs. Indeed it was this uncomfortable marriage between Britain and France that kept Concorde on track, despite on occasions one or other of the partners wanting to pull out of the project, just as the Americans and Russians had perhaps sensibly pulled out of their own Supersonic Transport (SST) projects. 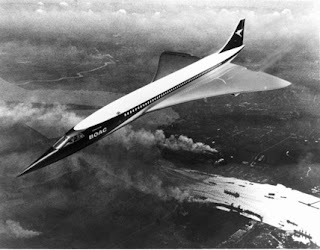 When it was finally ready for delivery in the early 1970’s it emerged into a market scarred by the 1973 oil crisis. National airlines that had initially shown an interest in the machine backed off one by one, encouraged by local movements opposed to the alleged danger posed by the aircraft’s sonic booms as it broke the sound barrier after take off. Localised banning of the aircraft at key U.S. airports up until the late 1970’s was a source of severe diplomatic friction between America and the Europeans during this period, with the French in particular suspecting that this was a jealous attempt to destroy the aircraft’s prospects. Nevertheless, regardless of being a technological marvel, Concorde was to remain a grevious commercial flop.

Although in hindsight there is a temptation to regard the history of the British Aviation industry as a characteristically gallant failure, the reality is that a great deal of money was ultimately squandered that could have been better spent on health, education and welfare. The aviation industry was cosseted while other key industries were allowed to go to the dogs, not least shipbuilding. These vainglorous projects were a major part of the reason that areas such as Clydeside, Wearside, Merseyside and Belfast are mired in poverty to this very day. There was an air of unreality in the dreams of the UK’s aerospace engineers, dreams that governments, both Conservative and Labour, were far too keen to indulge. The final result was a severely diminished aviation industry itself, with BAC merging with Hawker Siddeley to form the unloveable British Aerospace (now the even more unloveable BAe Systems), and BOAC merging with British European Airways (BEA) to form the mean organisation we now know as British Airways. True to the spirit of their long-lost ancestors, both BAe Systems and British Airways frequently give the impression of being far more trouble than they're worth.
Posted by Phil Knight at 18:36

Funny, recently I was reading a broad overview on what all happened with the American commercial airline industry in the early '70s. About how all its prior romanticisms were sandbagged by a series of reality-checks. The Concorde matter aside, it got hammered on a number of fronts.

Well maybe the airline side did, but I'm not sure whether the manufacturers were hit to the same extent.

I think that Boeing's airliner projects were substantially cross-funded by the Strategic Bomber programme. There were some incredible follies created by the US aviation industry (check out the XB-70 Valkyrie), but the US economy and Government were much more able to withstand the associated losses.

I think Empire Of The Clouds, a recently-published and widely-reviewed book by James Hamilton-Paterson, needs to be mentioned here. It examines precisely the subject under discussion.

Well, that book seems to be mostly about the test pilots (who were almost pop star figures in the late 40's/early 50's) and the military side, which I tried to avoid in this post simply to keep it to a digestible length.

But thanks for the reference - the whole post war to-ing and fro-ing over Defence had a huge (and mostly hidden) impact on domestic policy, and even today the extent of how it impacted post-war culture is not fully appreciated.

Urban Aero Systems is an Aviation Infrastructure company that aims to introduce cutting-edge aerospace support technologies into India. We have our own modern infrastructure, with a highly experienced team in Aviation.
Fec Heliports
Inflatable Boats in India
Helipad Dimensions

Thank you for the various information, hopefully useful for everyone

Back in the 60's I read a book about the sad state of the U.K. aircraft industry. One of the success stories was the Vickers Viscount. But this book claimed that it was only due to Air France ordering the plane that B.E.A. followed them. But for the order from Air France the Viscount would have flopped.
Does anyone have info on the situation?
Thanks

Quick up your career with Azure Training in Chennai from Infycle Technologies, the best software training institute in Chennai. A massive place to learn topmost technical courses like Medical Coding, Mobile App Development, Data Science, Big Data, BlockChain, Full Stack Development, Digital Marketing with Graphic Design, Python, and Oracle with emphasized trainers of the industry. Speak to us on 7504633633, 7502633633 to know the updated offers for your learning.