I Wanna Cleave a Capitalist! 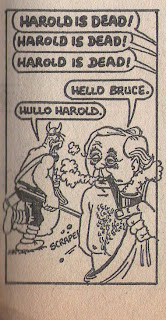 Bruce the Barbarian was a cartoon by New Zealand-born cartoonist Murray Ball, apparently well known for a series called Footrot Flats, about a farm. It ran in Labour Weekly, an official Labour Party publication that was closed down in 1988 - and given the year, and the tone of this cartoon, it's not hard to imagine that the weekly was being run by a cabal of those who, as official Labour Party history has it, ran the Party into the ground - macho, workerist, class warring, hairy. A book was published in 1973 collecting the strips, all of them dating from the Heath era, and it's as vivid and expression of polarised, oppositional politics in the British '70s you could possibly want. It's also quite funny.

The premise is a little peculiar, but once you've accepted it, the cartoon is not exactly complicated. Bruce, a Barbarian from the East - specifically, New Zealand - comes to invade the (falling) British Empire to 'RAPE and LOOT and PLUNDER', but, says the blurb, 'he found the Tories had got there first!' So he sets out to 'save the British from Ted the Tory and grab a fair share of the looting, plundering and raping'. This should give you some sense of the somewhat complex allegiances of the strip, particularly with respect to sexual politics. Various forms of disbelief have to be suspended - most of all the portrayal of Edward Heath, or rather, 'Emperor Tedius Heath', as a proto-Thatcherite Roman Emperor bent on class war - but the lack of pissing about occasionally makes for extremely sharp political satire, which the hint of wrongness only helps. It's Up Pompeii-goes Class War, with Frankie Howerd replaced with an Antipodean barbarian armed with a 'pig-sticker', which gets regularly plunged into sundry toga-ed plutocrats.

It's just a little a bit startling to find an official Labour Party publication advocating, via Roman/British Empire alternative reality or otherwise, that shoving daggers into the bellies of the ruling class is the means of changing society.

Reading it, it becomes obvious that this is the very thing itself that the Blairites wanted to change about their Party, not just in terms of politics but also of machismo. Bruce, barbarian and defender of the British proletariat, is as you see above a bit workerist. The workers themselves are usually a bit shorter than him, but usually in flatcaps and somewhat more downmarket togas.

What is especially fun about it is how much it advocates things which would surely not have been official Party policy even at the time. Private Healthcare, which Bruce encounters after being impaled in a Gladatorial bout, is fit not just for nationalisation but also for avenging via pig-sticker.

Private education, similarly. Here you get the impression that for a lot of people in the Labour Movement, Thatcherism - in the sense of a concerted attack on unions, the Welfare State, etc - was seen coming a long time before it actually arrived, which leaves some of the attacks seeming a little odd. Thatcher as Education Secretary basically continued Labour policies (save for that heavily symbolic milk-snatching), much as Heath failed to make any real break with the social democratic consensus. That's what it seems like at this distance, anyway - but reading Bruce the Barbarian, the war is already here.

Yet lots of the things he opposes are Labour Party policies anyway. Only four actual politicians are encountered by Bruce in his travels through Britannia - Heath, Enoch Powell, Thatcher and Harold Wilson, who Bruce casually encounters in the street. In the strip above, Bruce stands against the construction of motorways, something the Wilson government did a lot of. They didn't exactly curb Private Health or Private Schools, either.

Being a barbarian, Bruce takes a dim view of Empire, and of its leading apologist in the ruling party.

That said, the strip is relentlessly unreconstructed. In terms of anti-racism, it's all fairly impeccable, if very un-PC in its use of inflammatory language. What is less so, is the sexism that runs through the book. He is a barbarian after all, and the scheduled raping, looting and pillaging doesn't leave much room for reading Spare Rib.

Hence the Up Pompeii! comparison. Bruce the Barbarian, despite being quite magnificently left-wing by today's standards, is still identifiably in the same world as the sex comedy, as George & Lynne, even, with a fair bit of bouncing bosoms and titillation. Bruce, maybe like the Labour movement itself on its Hard Left, Class War side, is not quite sure what he thinks of the women's movement.

So large breasted ladies are a sign of plutocracy as much as anything else.

The strips above and below encapsulate quite well the fact that Ball evidently wants to support feminism and take the piss out of it at the same time, to be a male chauvinist and supporter of equality at once. Ken Livingstone claims here, 'Old Labour culture was quite sexist and racist'. It probably was. But it was also perhaps vaguely, dimly aware that it shouldn't be, before the 80s New Left rammed the point home.

In its premise it's weird, as politics it's almost equally strange (Wilson as friend of the Marxist barbarian), and sometimes (well, rarely) it isn't funny - but isn't it great to see all the anger and violence and unadulterated class rage in this strip all there, all out in the open, and not just that, but celebrated? And more to the point, can you imagine the editors of any Labour publication looking at it now with anything other than aghast horror?
(click on pics to make larger)
Posted by owen hatherley at 15:21

I remember the "Hold it, my good barbarian, that is not the way we change society here!" one very well: it was reproduced in the Spectacular Times, an anarcho-situationist mag I picked up from Compendium Books as a precocious left-wing teenager. Gobsmacked to find it came from a Labour Party publication!

What was it with barbarians in the 70s/80s? They appear to have been all the rage then - especially comics (cartoon machismo in reaction to the women's movement?).

In US and Europe, they had more of a libertarian/right-wing bent though (especially Hollywood versions in the early 80s). UK versions tended to give them more left/anarchist leanings (like SWP member Pat Mills' 'Slaine').

I think Asterix started it.

Murrey Ball ls held in great regard by New Zealanders, to this day.There is a cartoon movie Foot Rot Flats that is found in most Kiwi homes as a must see movie for the kids An Egalitarian ethos was Kiwis most accepted standard of ethics .Still is outside Auckland.Remember NZ is like another planet.Refuges from the USA are becoming a problem.The Hobbits won't like either.