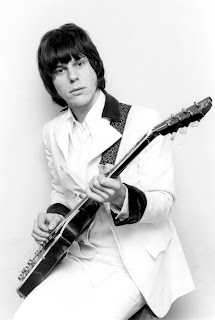 A relatively obscure figure today, Jeff Beck was one of the great sonic pioneers of the late ‘60’s and early ‘70’s. Whereas for most musicians the possibilities of the electric guitar lay in its ability to conjure rebellion and carnal heat, Beck’s approach was coolly technical - he played the guitar like a precision machinist, as though it were a milling machine or a lathe. A notorious perfectionist, he once asked his record company to withdraw a released album from the shops so that he could add some more overdubs to the mix.

Beck first came to prominence as Eric Clapton’s replacement in The Yardbirds, and who, during his tenure, became the most aurally adventurous group of the pre-Hendrix era. Their masterpiece, "Happenings Ten Years Time Ago" was a modernist vortex that seemed to suggest almost endless possibilities, though it marked Beck’s departure before Mickie Most destroyed the band and Jimmy Page rebuilt it in his own image.

During 1967/68 Beck recruited his own group from the roster of established and up-and-coming musicians that constituted the British R'n'B scene, including Rod Stewart, Ron Wood, Nicky Hopkins, and even on occasions John Paul Jones, Jimmy Page and Keith Moon. The two albums he recorded with this first incarnation of the Jeff Beck Group, "Truth" and "Beck-Ola" were awesome explorations of the possibilities of stereophonic sound - the lost midpoint between early pioneers such as Joe Meek and Phil Spector and later dub magicians such as Lee Perry and King Tubby. His version of The Yardbirds’ "Shapes Of Things" is a veritable Spaghetti Junction of a recording, with great arches of phased guitar whizzing over the listener's head from every possible angle. "Beck’s Bolero" is similarly mindbending, alternating as it does between fuzzbox-distorted riffing and a clear, echoing slide guitar that recalls the vintage modernism of The Shadows or the soundtracks to Gerry Anderson shows.

"Beck-Ola" was heavier than "Truth", and is often cited as a precursor to heavy metal, but even amongst all the thunder, there’s a precision to the playing and the recording that is so characteristic of Beck’s work. Perhaps that is what is so anomalous about his music to post-punk attuned ears - the sounds that he created weren’t accidental to what he was intending - Beck left nothing to chance, and recorded exactly what he wanted to record, no matter how abstruse the original sounds in his head. Indeed, this is what separates us from all the early sound pioneers and renders them marginal and slightly kitsch: they had full authority over what they recorded, and so what they have bequeathed to us is rarely fortuitous, and can rarely be explained by the picaresque rock anecdote.

With the break-up of the original band, Beck formed a new group with a collection of virtuoso unknowns, and moved in the direction of jazz-rock. Although his music of this period is often criticised as being self-indulgent, my personal objection to it is the opposite - that it’s far too restrained and tasteful. That said, when they did rock out, the results could still be jaw-droppingly impressive. In truth, we are less likely to see another Beck than we are to see another Hendrix; the values of dedication, temperance and modesty being generally scorned. Nevertheless, if there are few post-war British musicians who really merit the attribution of the accolade of "genius", then Beck should really be considered amongst the foremost candidates.

There was also an all-time great funk riff: Stevie Wonder's 'Superstition': so 'mod' I mistook it for a synthesiser for years.

That's the thing about his collaborations - you often can't tell he's there because the sound he's making is nothing like that of the usual rock guitar.

A wwek late here. Over here, Jeff Beck is a big deal. Last of the original guitar gods as it were. And jsut like the Moody Blues I commented on above, I've been listening to Beck recently. Wierd to find myself on the same wave-length so.