... And Saturday night, once you allow yourself to think about it, isn't that much better than any other night. 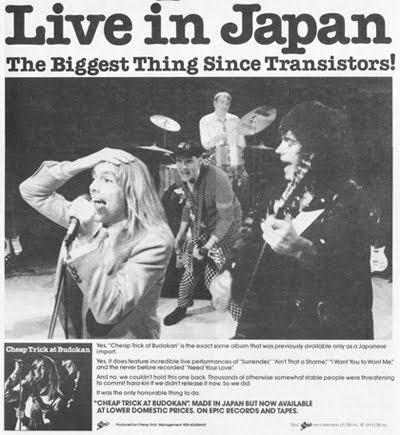 In 1976, there was no getting away from Peter Frampton. Seemed like you couldn't go very far without seeing the cover of Frampton Comes Alive. Wherever you went, there he was -- looking all illuminated and holy like some Byzantine icon. Saint Peter fuckin' Frampton, Bestower of the Communal Good Vibes, with frets held aloft to bless the flock with and whatnot. Staring out at you from record store windows; or from the ads for the Columbia Record Club that appeared in all the magazines; or from posters on the bedroom walls of your friends or their older siblings; or -- most often -- laying at the top of the stack of records propped up next to someone's stereo, where the album itself was in frequent rotation.

Rarely does a live album attain that sort of ubiquity. Because let's face it, nine times out of then live album are dodgy business. No matter how it's marketed, the live album is usually the equiv of low-end product in any given artist's catalog. Not to say that live albums universally suck, but they almost never rise to any level of consequence, let alone -- except for rabid completists -- rank as "essential." But in the U.S. during the 1970s, there were two big exceptions. The first being Frampton Comes Alive, with Cheap Trick's At Budokan following in second place.*

In the latter instance, good timing had a lot to do with it. At Budokan arrived in 1979, right about the time that disco's hegemonic grip on the culture was finally waning and a lot of people were ready to hear something else. The album's lead single "I Want You to Want Me" rapidly climbed the charts. People heard all the girls in the audience shrieking and chanting along and wondered how they'd previously missed out on the band -- how it was that the band could be so wildly popular elsewhere, yet why haven't I ever heard of these guys before? It was a classic example of the "big in Japan" scenario. 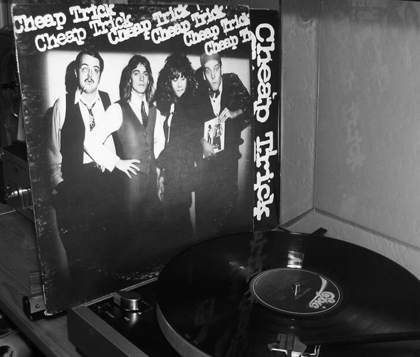 But yeah, Cheap Trick hailed from the midwestern flatlands -- Rockford, Illinois to be exact. What is there to say about Rockford, Illinois? Probably not much, for or against. It's just some middling, nondescript town you drive past if you're en route between Chicago and Minneapolis. It fall in the endless expanse of cornfields, but it isn't what you'd call "metropolitan" either -- it's just industrial in the blandest of ways. Probably the sort of place -- like almost all places -- where it sucks to be a teenager. Where there's little else for you to do but drive around aimlessly, keeping an eye out for something that might be going on or someone you might know. Another night measured by the distances between stoplights, tunes in the tapedeck, getting out of the house and away from your parents for a while is enough.

And about those tunes: Most times they sound like the standard waist-down bombast of the whole '70s "boogie" sensibility, the sort that was so popular across the broad swath of the midwest. Yowling about Kicks and all the usual stuff, but at the same time seeming to be about something else -- about the sorts of things that make you want to get out of the house in the first place, that send you out in search of something else. About being in a place like this, a place so numbingly boring that it makes you perpetually restless, births that set of desires that'll so doubtlessly go unsatisfied, point toward a bleakness that often seem to mockingly undercut the over-arcing narrative. It hints that fun is something most often pursued but only rarely attained. Inasmuch as it has to do with bumping uglies, it also naggingly reminds you the times you've placed a late night call, waiting for her to pick up, telling yourself your only going to let it ring JUST ONE MORE FUCKING TIME before you finally hang up, as you picture the phone on the receiving end chiming away in a dark and empty apartment. It's even got a song on it about the time your mom got plastered and told you that you were the reason your dad never finished high school.**  And in some ways it reassures you that "Normal" ain't nothing but a smaller and even shittier town somewhere downstate.

* * * * *
At Budokan was also perfectly timed by the way it captured Cheap Trick at the height of their ascent. Recorded as they were touring to support Heaven Tonight, by which point (some argue) the group already had the bulk of their "classic," first-rate sings behind them. Dream Police, their fourth studio effort, would arrived later in 1979; and while it sported its fair share of winners, it sounded like they were treading water through half of it. By the time the tepid, George Martin-produced All Shook Up was released the following year, it was clear that band had already started to flounder.

But hey, enough of my yapping. Let's boogie...

At some point, you might wonder if they stole that riff from the Ramones; bit it's more likely they copped it from the opening of "Gimmie Some Lovin'" instead. And then the Ramones would eventually own up to plundering the riff from this tune in short order.***

Aside from the deliciously unhinged portion of the latter half, there's nothing here that'd rank as phenomenal. Still, it trots a lot of raw craftiness that'd get smothered by all the overplaying and overproduction on later discs.

In which the bass player shows just how much of the load he can carry. Zep-style heaviness (or something) streamlined in way that would sound much more de rigueur about a decade later. And perhaps you're better off paying no attention to the lyrics, because they're unforgivably crass and lazy. As in: If you've ever known anyone who's killed themselves -- suddenly, unexpectedly, without (as is most often the case) giving any prior indication that they were having trouble, thereby leaving all their friends and loved ones to carry around all sorts of unanswerable questions for the rest of their years -- you might just have the urge to haul off and punch the smirk off the songwriter's smug, pasty-faced gob. You might. Yet you find yourself singing or humming along with the chorus anyway.

One of the two songs by the band that most everyone knows -- their calling card, the karaoke favorite, the tune for which they'll be most remembered, and blahblah. The one that includes those deeply peculiar details from suburban life, including the bit about the parents that the narrator'd rather not be party to. Also the one in which the drummer who looks like a a chain-smoking CPA very solidly demonstrates what all he brings to the outfit.

Having grown up in Alabama during the years that these records came out, I was never sure what Southern girls Rick Nielsen was writing about. Probably just as well that I never found out.

Right, their indebtedness to the Lennon/McCartney schools of songwriting ran so deep that it doesn't even merit discussion. The version of this tune that appeared on In Color sported an arrangement that didn't quite take, sounding a bit fussy and self-conscious and cloyingly cute. Bootleg and reissue culture has shown us that the group reworked the song at various tempos throughout their early years. But the live version from Budokan was the one that put it over, finally getting it right in terms of matching energy with the aching urgency of the lyric; driving its bubblegummy sentiment home with plenty of deftly casual blooz-boogie riffage, and showing that the band were most in their element on stage anyway.

And then there's this version, recorded nearly 20 years later in an unreleased session with Steve Albini, which reveals a good song can be stretched any number of directions without losing its appeal.

* If you were trying to be ironic (or Chuck Klosterman) you might make the case that for Kiss Alive and Kiss Alive II. Personally, I'd make a case for Donny Hathaway's Live being the best of the decade. But for the topic at hand, I'm narrowing the discussion down to top-40 rock/pop, Billboard-sales figures criteria.

** Okay, that's actually not what the song is about, maybe it's just how you choose to hear it.

*** As at least one critic has pointed out, there's something wonderfully ironic than hearing an artist proclaim "I'm a whore!" on their major-label debut.

(OK, maybe only EW&F hit the big-time charts with theirs, but still).

Right, there are plenty of exceptions which deviate from the usual major-label cash-in/contractual obligation/bullshit standard. But (going on memory) the sort of chart-climbing, everyone-seems-to-own-it ubiquity I'm talking about was most often reserved for the like of Neil Diamond, Barry Manilow, etc. (And Kiss Alive, but that's only if you were hanging out with people under the age of 15...which I was at the time.)

And wasn't Metallic KO originally a bootleg? Wasn't Nick Kent a party to that somehow?

And I forget which contributor requested/all-but commanded I post something about Cheap Trick. Hope I didn't just make them regret it.

It was Phil, I believe.

Yeah I suppose K.O. wasn't properly released til the late 80s. Forgot another one: 'Live Rust' - wasn't Neil Young big in your neck of the woods?

Anyway, Cheap Trick - why did they always look like they wandered in from four very different bands? Was that a conscious image?

Dunno. But I think that's why some clueless people mistook them for being "New Wave" at the time.

> "wasn't Neil Young big in your neck of the woods?"

if only "power pop" had meant Cheap Trick rather than... what it actually refers to

re: Cheap Trick, I was encouraging the 'hoos to follow his muse...

@ Martin: That was the one I was referring to in my comment above.

And since it seems I didn't make it clear enough: What I was primarily talking about was live albums that "broke" an artist -- i.e., reversing their history of fair-to-dismal sales and no hits on the charts.