It’s hard to imagine now that Third World War ever existed. They are a singular proposition, Communist (or at least communist-leaning) insurrectionary Yobo Pub-rock as tough, sparse and scathing, as funky and rhythmically driven as anything produced in post-punk, or America’s mid- eighties Hardcore scene, yet their two albums were first released in 1971 and 1972.
There’s plenty of punk-before-punk theorizing and cataloguing going on, but you’d be hard pressed to find a punk band, or indeed any band that doesn’t sound anaemic next to Third World War, the only other band of roughly the era that sound as authentically dangerous are The Sex Pistols and even they can’t quite boast Third World War’s invigorating class-war rhetoric and sheer, driving groove. A large part of their propulsion derives from Third World War’s being unashamedly sunk in the blues and rock and roll while at the same time rejecting heavy rock or prog in favour of an amped up, wired, spit and sawdust, goodtime boogie. The guitar sound, serrated, bright and sharp, the nagging, sinuous bass, the rolling piano and the caustic vocals all tell you one thing: this is a speed band, a pub band, a band that feeds on negative energies, invokes them and uses them to sharpen and hone its already formidable edge, a band that wants to needle, that thrives on confrontation and anti-social energies.
In some sense Third World War feel quintessentially British in their remorseless focus on violence, class and politics. Few bands can have engaged so fundamentally with the underlying tensions of their times as Third World War, few bands feel as though they documented an era as concisely or anticipated the strife to come in the mid-seventies more presciently: it’s hard not to think of Third World War as the real voice of the early Seventies, unfashionable, aggrieved, up for a good Saturday night out (fighting/ drinking/ heads down, no-nonsense mindless boogie) but even more up for the revolution they see just around the corner. In their celebration of politicised, boot-boy thugishness they might also be said to anticipate OI, but there’s a control of tension and dynamics, a muscular, musical intelligence that grants Third World War’s work a kind of cinematic scope: these boys can play and the records seethe with a barely restrained power that occasionally erupts into flailing white-noise jams or clenched, coruscating solos. Few bands have ever swaggered or been so adept at poised violence as Third World War, feeding on the eternal, and endlessly replenished manna of British life, class antagonism. Listening to Third World War almost forty years later, the question as to just why the past fifteen years (with the exception of Grime) has been so dull in British music can partly be ascribed to this, not enough hate, not enough politics, too pretty, too vapid, too keen to make friends. For a moment, under the spell The Great Moderation we forgot who and where we are. Ugly, unsophisticated, angry, pitted against each other, trapped on a lopsided, dank little island. 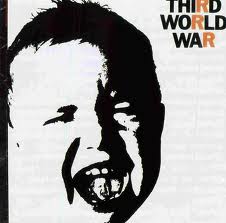 For Third World War the revolution is inseparable from the power of Unions and the revolt against work, it’s also impossible to achieve by peaceful means. In contrast to many of the overtly polemical Left-leaning bands of the Eighties (The Redskins etc) Third World War’s message is less one of amelioratory, earnest positivity (“go get organized!”) than a revelling in a death-or-glory violent overthrow of the class system (“Load your magazine clip! I’ll be loading mine”). In this sense Third World War understand class relations as a war, and one in which decisive resistance can only take place through fighting fire with fire, that as committed they are to our destruction, so, equally must we be committed to theirs' (“Pull your hand grenade pin/I’ll be pulling mine”). This is of course the “fanatical” character of the 70’s working class that Neo-Liberalism sort to redress. Appeasing it by enfranchising (some of) the working class as part of a share-owning, popular capitalist, property-owning pseudo-middle class on the one hand while also more aggressively attacking the UK industrial base. Anti-union legislation, de-industrializing in the progressive shifts toward becoming a “knowledge economy”, applying downward pressure on wages through reforms in Labour laws and high unemployment.
A large part of what makes Third World War so valuable in a documentarian sense are Terry Stamp's lyrics, which articulate not just all the suppressed anger, the glowering resentments and unhealthy lusts of the age, but pay a singular and specific attention to the political character of the time. At his best Stamp is a superb lyricist, mordantly funny, balefully ironic, sharply focused on the (sometimes indistinguishable) miseries and pleasures of 70’s working-class life, revealing of it’s prejudices as well as its progressive character. The aim is to provoke, sometimes it’s fatuous, “Coshing Old Lady Blues” (which contains the hilarious line, “Hey grandma/hide your money in your shoe/ I’ve got those/ coshing old lady blues) sometimes both intoxicatingly polemical and wryly hilarious, as in the wonderfully titled “I’d rather cut cane for Castro” (Working in the fields/Fidel’s my neighbour/I’m genuine U.K/Semi-skilled labour.) Perhaps best of all is “Factory canteen blues” (you don’t sit near/ the management’s table/so educated, mathematically able/with their figures on graphs /and Hoi Polloi chatter/you’ll work 5% harder/and they’ll grow 5% fatter) a long tale of industrial discontent that threatens to boil over into “factory burning”. This is social realism from the ground up, in which it’s necks, not hands that are being wrung. Social realism as a mailed fist, exhortatory, lunatic, uncompromised, a report from the Seventies of the Angry Brigade, Saltley Gate, the industrial relations bill and Who Governs Britain?
“I’ve got just the thing for you/ a real cop beater/a sawn off twelve gauge/5 shot repeater.”
This is a band far too good, far too important, to be sidelined as proto anything.
Youtube playlist here.
Posted by carl at 17:06