The Ballad Of Ruby Flipper 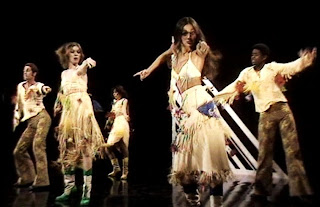 Those of you enjoying the current re-runs of every 1976 'Top Of The Pops' will almost certainly have noticed two things: that the charts have always been shit, and the inexplicable and occasionally mindscramblingly cryptic performances of mixed sex, interracial dance troupe Ruby Flipper.

The Flipper, as they have never been known, were only on the show for five months,and never managed to warm the nation's cockle and loins in the same way that their immediate predecessors, Pan's People, had done, despite featuring two former People in their line up. The precise reasons for this may never be known, although BBC Head of Light Entertainment Bill Cotton tried to put his finger on the problem in a meeting with legendary choreographer Flick Colby - 'Flick, no-one in England wants to see white girls dancing with a black man'. Cotton's most notorious programme was, of course, 'The Black & White Minstrel Show'.

Here are some select moments from their short reign of terror.

The Flipper were quite good at the disco stuff, but then, after all, disco is designed to dance to. What they were able to do on a number of occasions is to communicate the energy of the music to the traditionally rather lumpy studio audience, upping the tempo of their shuffling considerably. In this routine, they demonstrate the dual nature of Colby's routines - a confusing mix of lacivious grinding and infantile pantomime.

This routine is as much avant garde theatre as Thursday night pop variety, with a colour scheme pinched from a Czech New Wave film and a concept that has echoes of Dante Alighieri . It's baffling and frightening and the shaking, banging wrists are vaguely pornographic. In my nightmare, the song never ends, and I end up watching them walking in and out of these wobbly doors for all eternity.

Finally, here's their interpretation of Bowie's 'TVC15'. It always reminds me of a fly on the wall documentary set in a secure unit. I keep expecting R.D Laing to wander in with a clipboard. Bizarre, although I'm sure Dame Dave would have approved.

Email ThisBlogThis!Share to TwitterShare to FacebookShare to Pinterest
Labels: 1976, Dance, Top Of The Pops, TV, U-W