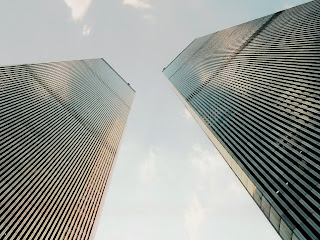 "A monotone value is one that either only increases or only decreases. Its curve has no kinks; that is its curve never changes from increase to decrease or vice-versa. Desired substances, things, patterns, or sequences of experience that are in some sense "good" for the organism - items of diet, conditions of life, temperature, entertainment, sex, and so forth - are never such that more of the something is always better than less of the something. Rather, for all objects and experiences there is a quantity that has optimum value. Above that quantity the variable becomes toxic. To fall below that value is to be deprived.

It is even possible that when we consider money, not by itself, but as acting on human beings who own it, we may find that money too becomes toxic beyond a certain point. In any case, the philosophy of money, the set of presuppositions by which money is supposedly better and better the more you have of it, is totally anti-biological. It seems, nevertheless, that this philosophy can be taught to living things."


The anthropologist, biologist and cyberneticist Gregory Bateson characterised all biological systems, including human civilisations, as conforming to either one of two modes. The first mode he called steady state. In this mode organisms operate in their environment in a self-correcting, homeostatic manner, in which any variable of behaviour is not allowed to get too out of hand without being corrected by another behaviour. Bateson’s own analogy was the steam engine with a governor that allows it to slow to prevent overheating, and his archetype of a society that had achieved a steady state system was Bali, whose culture forbade competition and rivalry in favour of a near-artistic sense of social balance.

The other mode in which a system can operate he termed runaway. In this mode, like an engine without a governor, a behaviour will become ever-increasingly extreme and distorted until it reaches some kind of catastrophic climax.

Steady state and runaway are connected to two other Batesonian concepts - the evolutionary ideas of adaptation and addiction. For Bateson, evolution was what he called a stochastic process, which meant that it was partially random, and yet at the same time had certain favoured outcomes. A creature was adapted to its environment if it was readily able to cope with any change in variables (e.g. temperature, food supply) that it might encounter. An organism was addicted if it was overly specialised in one ecological niche, and subject to extinction if this niche were to become no longer viable. The stochastic process of evolution is liable to produce many variations in organisms (and systems) that appear to be advantageous in the short term, but are fatal over a longer period.

There is, of course, no more magnificent an example of a runaway system of addiction than Western capitalist society. It is a mistake to believe that Anglo-American capitalism promotes addictions. Anglo-American capitalism IS addiction. There is almost no aspect of our society that is immune to metastasis or rarefaction, whether it be banker’s bonuses, binge-drinking, death metal or Las Vegas casinos. These are not different phenomena, but rather different manifestations of the same phenomenon - the sheer inability of Western social, cultural or economic trends to self-correct before they reach exhaustion or catastrophe. We are born addicts into an addictive society whether we like it or not.

Perhaps the two realms where the metastatic results of this addiction are most prominent are in the symbiotically linked realms of architecture and finance, and their two most cherished creations of the modern age, the skyscraper and the fiat currency. The 1970’s witnessed perhaps the most significant inflection points in their dual evolution with the withdrawal of the US Dollar from the Bretton Woods system, and the completion of the World Trade Center.

The "Nixon Shock" of 1971 saw the US end the direct convertibility of the Dollar to gold, ostensibly to end the demands of European creditors to have their dollar holdings converted to gold. This is in turn was due to the persistent US Governmental and trade deficits that had been aggravated by the Vietnam war, and had been partly ameliorated by a surge of dollar printing. Whatever the short-term relief it gave to the American economy, the de-linking of the currency to a finite commodity had the longer-term effect of facilitating the ephemeral money-economy of neoliberalism, in which the immaterial realm of money creation via financial transactions was able to far exceed the real wealth generated by physical production. 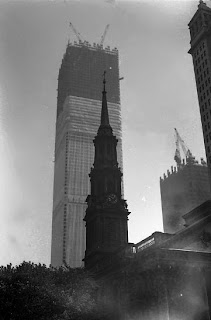 If the current global economy can be rightly described as a virtual system, the World Trade Center could almost be described as a virtual building. Mies van der Rohe’s International style has always been superbly appropriate for the financial industry, with its blank poker face pointing streetwards while all sorts of arcane machinations (usually involving variations of mortgage fraud) go on inside. The Twin Towers, which were the complex’s focal point, perhaps marked the moment when the concept of the skyscraper went from being an ingenious structural solution to the problems of land utilisation, and became more a kind of boastful expression of size for size’s sake. Minoru Yamasaki’s design was interpreted by many as being finance Capitalism waving two rigid digits at the rest of the world.

The tube-frame structure of the Twin Towers was to prove notoriously insubstantial during the fateful attacks that sealed their doom, and as such they can viewed as a metaphor for the equally insubstantial and equally doomed global economy that they helped to facilitate. We may feel ourselves to be omnipotent in our virtual realms, but it is the greater force of nature that will put an end to our illusions. As the Club Of Rome’s Donnella H. Meadows put it:

"There will always be limits to growth. They can be self-imposed. If they aren't, they will be system-imposed. No physical entity can grow forever. If company managers, city governments, the human population do not choose and enforce their own limits to keep growth within the capacity of the supporting environment, then the environment will choose and enforce limits."
Posted by Phil Knight at 17:50

Arguably this process may have opened up opportunities for 'traditionally' oppressed/marginalised groups - but in the long-term the whole financialisation process had its own means of oppression and restoration. And many have realised that rampant individualism can be a cripplingly isolated and vulnerable condition.

Yeah. One thing I forgot to mention was how a lot of these trends are amplified by the shifting baseline of succeeding generations e.g. how horror films have become more and more gory as what was barely acceptable for one generation becomes the norm for the succeeding one. Obviously the cultivation of "generation gaps" by marketing is important in this process.

Still, it's all going to come to a very messy end. We're a dying civilisation, and when this realisation hits the mainstream, you can expect old-fashioned morality to come back with a vengeance, whether for better or worse.

One little trivia item about the World Trade Center: It's chief designer was Minoru Yamasaki. One of Yamaskai's earlier projects was the Pruitt-Igoe housing project in St. Louis, which was demolished by the city in 1972 as the WTC was going up.

The razing of Pruitt-Igoe was quickly hailed (by architecture critic Charles Jencks) as the "death of modernism" -- i.e., the death of its idealistic, utopian social-engineering hubris. And that verdict quickly became a rote, unquestioned truism in art-crit circles, repeated ad nauseum to this day.

Of course we know how the WTC was reduced to rubble. But a new doco is jockeying to reopen the books on the Pruitt-Igoe case...

Ah, I'd never heard about Pruitt-Igoe - its story seems eerily similar to developments here in the UK.

Was it a sound piece of architecture when it was built, or was it rushed/cost-cut into existence?

I think it's fate is mostly chalked up to a "social experiment that failed." And as these things always go, certain economic factors (or innate imbalances) are never factored into the equation/program.

And yeah, by the 1990s developments of this sort were being demolished in many big cities. I was living on the south side of Chicago when that municipal "trend" was in full swing. I recall a couple of weekend mornings when I awakened by the boom of an implosion taking place in the next neighborhood.

"you can expect old-fashioned morality to come back with a vengeance, whether for better or worse."

Funny how so many were keen to see modernism 'die', while keeping the worst aspects of modernity (propaganda, environmental destruction, mass killing etc.).

We need more architecture on these blogs - far more important in shaping the world than pop, films etc.

Just came across this, which seems relevant:

I think it'll end the way all civilisations end - people will slowly come to the realisation that the status quo can't be propped up any longer, and they'll withdraw themselves from the system.

What people don't realise is this is just a regular feature of history - civilisations rise, overcomplexify, and then die. Nothing special about us whatsoever.

BTW, another ironic bit about the WTC I stumbled across some time ago...

Ironic in how it (similarly) connects the twin towers to the lives of "little people" in the American midwest. Google "W.R. Grace" and "Libby, Montana" for more details.

Well, a trivial factoid from me is that Mies van der Rohe's International style was reputedly a direct response to Spengler's "Decline Of The West", which suggests he either misunderstood the book completely, or wanted to get Oswald spinning in his grave.

I can't help but think of the Ottoman transition to modern Turkey ie. western powers forming unlikely international allegiances (to huge domestic opposition), suspicious neighbours, coupled with grave human rights abuses and oppression of minorities. And of course, ongoing chaos in the 'client states' fought over and hastily departed (ie. middle east - South America appears to be working a way out of American oppression, give or take the civil war conditions of narco-trafficking).

I've no doubt we'll see all sorts of weirdness over the short-term, including stuff we can't even begin to predict. The Korean Empire, anyone?

In the longer term, I think we're going to be back to ploughing with oxen, but that's the subject of another post.....

RIP JB, the best bullshit detector out there.