While the scientists fight to save it, Venice’s best friend is the photographer, whose art alone can do something to capture its incomparable bewitchments for all time.

Time travel in Venice can be a little dull. Suppose you were transported back to 1972. How could you tell? Your cellphone of course wouldn’t work. Good luck sending an email or spending those Euros. And the fashions have changed, although not as dramatically as one might think. Let's say that you were teleported to Riva degli Schiavoni. Would the garb of these folks immediately capture your eye? 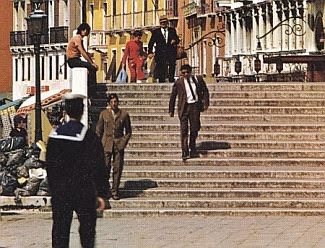 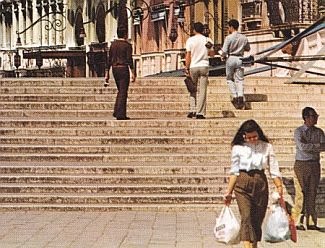 The lady in red at the back of the top picture, perhaps. How about this couple standing in front of San Giacomo di Rialto? 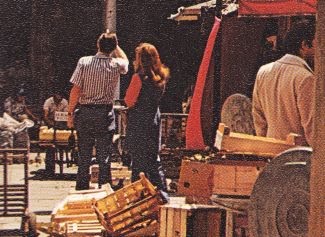 This young woman resting beside the Tetrarchs? 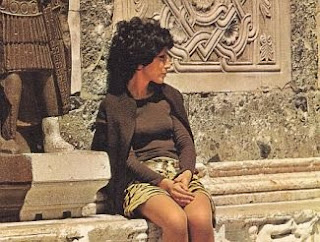 I suppose that yes, you could tell, you would, by looking at the people, unless you happened to be transported during the Carnival, when Venice becomes even more of a period piece. But the buildings themselves haven’t changed appreciably for a very long time. Digital television dishes have flourished on the rooftops in the last ten years or so, but they too can be easily deleted in post-production, along with the power cables and the old aerials. Then, so long as you keep the motorboats out of the shot, you are left with Venice as it looked any time between the late eighteenth century and last Wednesday. 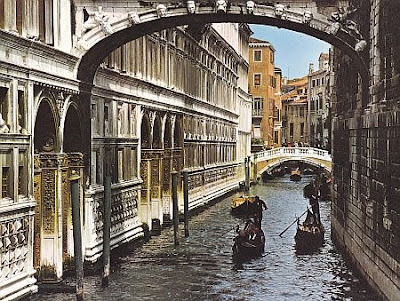 Timeless and at the same time unique, Venice cannot play any city other than itself, but in that eclectic mix of styles and architectural influences lies also its ability to sublimate its own bloody history into an immensely appealing aesthetical form. Venice pioneered the most marauding forms of wealth acquisition, opening countless trade routes at the tip of a sword, or the blast of a cannon, or the threat of bankruptcy. The magnificent quartet of bronze horses that adorn the façade of its basilica are a spoil of the appallingly savage sack of Constantinople, but so too is Saint Mark himself, whose remains were abducted from a temple in Alexandria at a time when being in possession of such a relic could give a fledgling city its mana. Venice itself is a spoil.


It may be the people that place Venice in time, but the place was never meant to be inhabited. The Veneti who repaired on the mud islets of the lagoon to flee Attila’s hordes did so out of desperation, and they resigned themselves to build permanent homes there only once it became clear they would not be able to recapture their old cities. Nowadays they are leaving again, driven out by a cost of living progressively inflated by the tourist dollar. At the end of last year the city had 270,081 residents, versus 363,540 in 1972 (source), a trend that suggests that Venice could die socioeconomically before it has had time to die hydrogeologically. By contrast, according to Euromonitor the city takes in about 3 million tourists a year. And since all of them at one point or other walk along the same two routes and narrow bridges, what one spends a lot of time doing in Venice is fending off people, standing in line with people, trying to get away from people. So why is it that when I look at an old photo of Venice, I’m interested in nothing else but the people in it? 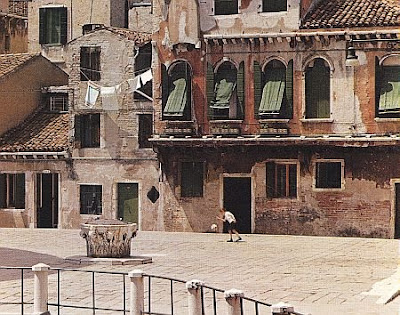 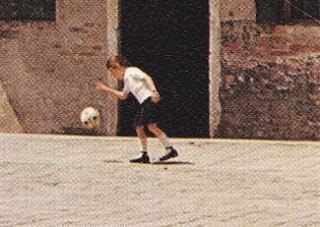 Maybe it’s because people are the opposite of timeless. This little boy dribbling a football in Piazza della Maddalena must be in his early forties by now. I assume by the fact that he had a ball that he was a local - for who would take a football to Venice? - but looking at the population charts there is a significant chance that he has since moved elsewhere. Whereas the Piazza is still there and I doubt that it has changed at all: timeless and constant, except for its slow sinking, along with the rest of the city, at the rate of several millimetres per year.


I clipped the images in this post from a book called Venice in Cameracolour, first published by the London imprint Ian Allan in 1972. The photographs by F.A.H. Bloemendal that I've been scanning in search of human figures are standard postcard shots, unexceptional save for the quality of the colour plates transfer, that sets the book apart from others of the same era. Venice in Cameracolour almost looks in fact as if it could have been produced in 2011, which assists with the time-travelling business. I also like to think that whilst working on the book Bloemendal might have bumped into Nicolas Roeg and his crew, who spent much of 1972 in Venice to film Don’t Look Now. 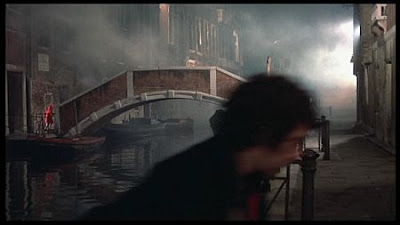 Venice used to be the place where the great literary minds of Europe went searching for inspiration, to create the new - Byron called it ‘the greenest island of my imagination’. It is also the place where people go to get married, or on their honeymoon, crafting their memorable past-to-be. But existing as it does outside of conventional time, and being so unlikely and so unlike anywhere else, it’s also the place where people go to forget. For the characters played by Julie Christie and Donald Sutherland in Roeg's adaptation of DuMaurier’s short story, it is the latter: for while Sutherland's John Baxter, an architect, works to preserve the city’s material past by restoring one of its churches, the pair seek to put distance between themselves and their English villa, where their young daughter drowned. But her presence, that minute figure clad in a red coat, haunts them still - for how could it be otherwise. There isn’t a non-place on earth where you could find refuge from that. 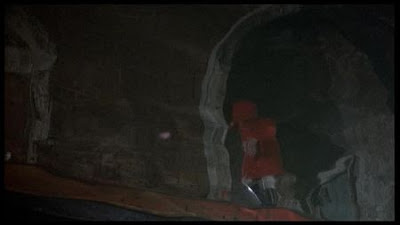 Venice doesn’t care about you, for it has no social texture - especially in the imaginary of foreigners. Roeg’s Venice, more so than Thomas Mann’s, more so than Ian McEwan’s, is the place where you lose yourself and start seeing people for what they are not. Sutherland's fatal chase of the red-clad figure at the end of the film - itself the ritual subject of multiple homages and remakes - is the fulfilment of a death wish, but it’s also an allegory of the death of the social. And what better place for society to die, than in Venice?

Originally published here. I cleared the cross-posting with management as it's the only form in which I'm able to contribute, I hope it doesn't put people off. Many thanks to Wayne for inviting me to take part.