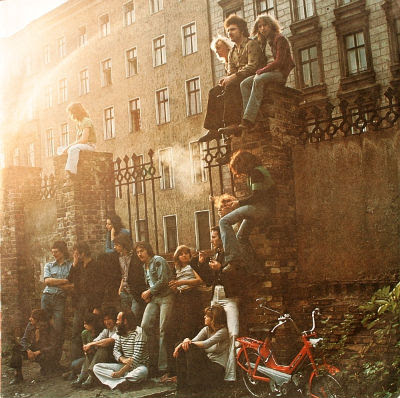 The last post reminded me of this group: Ton Steine Scherben. Never heard of them until a visit to Germany a few years ago. The person who told me about them seemed--like so many Germans--to be completely uninterested in, even mildly contemptuous of, Krautrockers like Can Faust Neu! Kraftwerk Ashra Popol Cluster et al, i.e. all the stuff that the Anglophone world cares about. But she thought Ton Steine Scherben were absolutely the greatest German group of their era. The album I've heard by them Keine Macht für Niemand sounded a bit like the missing link between Free and TRB: hard rock with a gay frontman and radical lyrics. The words are great, so my German friend told me. Anti-capitalist, anti-authoritarian, connected to the anarchist squat culture of West Germany, Ton Steine Scherben were proto-punk in another respect in so far as they put out their records on their own label, David-Volksmund-Produktion ('volksmund' means the people's voice, apparently). So while musically not particularly DIY-sounding (TSS played tight gutsy hard rock in the Lennon-Ono Some Time In New York City / MC5 mode), in non-sonic respects they were the missing link between Amon Duul and Crass.