When I moved into a 1974 building a few months back, the seventies objects I’ve been carrying around with me since my sister and I sold our family home a couple of years ago started to seem newly apt. It’s mostly my dad’s stuff that fills the boxes upon boxes we’ve gone to great lengths to hang on to, and the seventies was unquestionably my dad’s decade. Maybe he was a sixties child in some respects – hedonistic, a Hendrix fan – but most of his musical and literary heirlooms are from the subsequent ten years or so (from circa 1969 to 1981). So there are records by Neu!, Uriah Heep, Floyd, Fairport, Amon Düül II, Tangerine Dream, Suicide, old copies of Melody Maker and NME, and a wonderful signed letter from J.G. Ballard, in which the great man politely declines to take part in a conference on psychology and science fiction convened by my dad at Newcastle Poly in 1979.
Surrounding myself with these objects in a Brutalist university building feels apt but also weird. Is this a bizarre atavistic father-son thing? Am I gravitating toward places and things that recall my dad’s PhD years as I enter the exact same phase out of some suppressed instinct of quasi-religious remembrance? Is this what hauntology really is – mourning rituals coming back to bite us in the ass, memory and meaning fighting to get out of inert matter in an age of amnesiac secularism? My generation doesn’t so much suffer from a generation gap as from an uncanny over-familiarity with our parents.*


Anyway, sorting through psychology textbooks, dust-covered copies of New Worlds, and novels by Ursula Le Guin and Christopher Priest just before Christmas, I lighted on this excellent book, published in 1976: 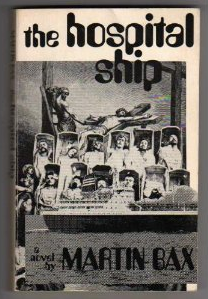 Perhaps people who were actually alive in the seventies can tell me whether or not this is a well-known text. It’s certainly not one I’d heard of, and not one that seems to pop up in received histories of the decade. Some very cursory internet research reveals that Martin Bax was a consultant paediatrician in London (apparently until very recently), but he’s better known for founding Ambit, a still flourishing literary/arts journal, which Bax now co-edits with middlebrow-poet-turned-monarchy-apologist Carol Ann Duffy, amongst others. Since the Hospital Ship he’s written only one more book, 2005’s Love on the Borders, which is a shame, because his debut really is a belter.
The plot is a simple one. After an apocalyptic disaster a renegade “hospital ship” sails around the planet spreading a gospel of free love that is part hippyish ethos, part experimental psychiatry. There are some evocative Children of Men-style scenes involving human crucifixion, which is taking place on dry land at the behest of an unspecified genocidal tendency. Survivors are rescued and revived by way of the ship’s sex therapies. Some atrocities are experienced first hand. Relationships burgeon and evolve. That’s pretty much it.
Ballard was a friend of Bax’s – there’s an endorsement of his on the blurb – and his influence is clearly discernible throughout. The other notable presence is William S. Burroughs; the structure of the novel utilizes Burroughsian cut-up, largely as a means of incorporating copious borrowings from medical journals and psychoanalytic texts. (In fact, take away the scientific material and you would have a novella of less than 100 pages.)
I’m not quite sure what I find so winning about this formula. I think it has something to do with the effortlessness of the outré aesthetic, the sense that writing an experimental, socially provocative novel was just something one had to do during this period, not because of ego or careerism (Bax could presumably have ditched the day job for a glamorous literary career), but out of sheer natural curiosity, a basic scientific-imaginative desire to synthesize and to create new creative compounds, new stylistic worlds, new social solutions. There’s a very moving valorization of capital L Love as a societal panacea that is utterly unimaginable in the twenty-first century, and the sometimes embarassing sex episodes are forgivable in this context. The book has a standard sci-fi premise but it’s charmingly scrappy, oblique, rough-edged, unprofessional and optimistic.
It’s all about the context isn’t it? In other words, Bax is clearly the product of an avant-garde with a clear-ish sense of what the whole point of writing experimental fiction is. The Hospital Ship reads like the product of a very seventies milieu, a counterculture entering its final phase, one that had Ballard, music, experimentation, sex and science at its centre, one that managed to enlist all these things in the service of an unequivocally progressive and even sometimes sentimental (from today’s vantage point) vision. This sort of world is vaguely familiar to me, the eighties kid, because it’s invariably what I think of when I think about my dad the psychologist/omnivorous reader/purchaser of willfully obscure records.
As a postscript, if you want an illustration of how important milieu (or a lack of it) can be on an artist, take the example of Martin Amis. Now, I’m a diehard Amis-hater, but I picked up a copy of Success (1977) on holiday last year (the book was short, I was bored), and I have to say, I thought it was pretty good. This makes sense though when you consider that Amis was, throughout the seventies, a part of (or at least on the peripheral fringes of) the same countercultural milieu populated by figures like Ballard and Bax. This was where early Amis derived almost all of his fictional energy from, and you can clearly see the negative effect on his writing of his gradual estrangement from this context as he enters the eighties and begins his journey from the Webbite soft-left through the neoliberal centre to the Bushite neo-con right. 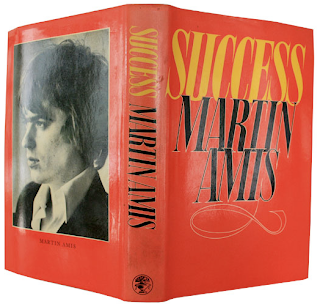 But in Success he still seems to have a tendentious grasp of the notion that, to write blackly satirical neo-Dostoyevskyian fiction, you probably have to have some sort of fundamental sympathy with the artistic margins, some sense of basic antipathy to the liberal establishment and the metropolitan literary set (even as you drink/shag/play tennis with its doyens in your off-hours). When you lose sight of this context, you really are fucked creatively. I read The Rachel Papers (1973) years ago, and I remember it having an ebullient, Chattertonian anarchy about it, not really experimental or avant-garde by a long stretch, but informed by a sort of dark, youthful malevolence (like much of the best rock music of the period, I suppose). This angry-young-man-meets-Pynchon mode seems to reach a delicious urban-gothic peak with Success, but by the time of Money (1984), which rehashes Success’s themes, the focus on excess and deviousness has already begun to tip into over self-indulgence and narcissism (but without the knowing bathos that had hitherto made these qualities seem acceptable), the literary equivalent of a bloated mid-eighties guitar solo.
Again, maybe there’s a personal context here. Perhaps I’m viewing Amis’s pre-eighties oeuvre in a slightly forgiving light because, there on the epigraph page of my dad’s 1977 psychology PhD thesis is a quotation from Amis’s Dead Babies (1975): I don’t know much about science, but I know what I like. Somehow, it all seems part of the same seventies context in my head.

*Maybe this is ultimately what resonates in late-eighties films like BTTF and Blue Velvet – see W. Kasper’s fine post over at Faces.
Posted by Alex Niven at 15:39

"My generation doesn’t so much suffer from a generation gap as from an uncanny over-familiarity with our parents."

- Very true, but I'm not so sure if this was a bad thing. I find that I could put the 80s in better (alienated) perspective from parental influence (including not getting sentimental about 60/70s paternalism. I've heard a fair amount of horror stories). Of course, this may not the same for those whose parents thought Thatcher was the second coming (and tended to do very well from her policies, at least in the short term). It's very different now, where the trend seems to be over-identification with children and teenagers (all those 40-somethings a bit too enthusiastic about CGI spectacles, Lady Gaga, the latest i-gimmick, grime and dubstep). A glance at any Sunday broadsheet seems to promote this fantasy of the (affluent) perpetual teenager.

But the whole notion of a British avant-garde was pretty much dead by the mid-80s (even ideas of 'radical' pop music, which got reported much less by the late 80s). Growing up then, many of us got our introduction to this kind of stuff from the dying days of 'public service' TV and radio (often introducing these things years after the fact, especially with films then). Then there's the big transformation of how the British middle class saw itself after Thatcher, and with that, the 'intelligentsia' - I grew up with different expectations of them based on 70s culture ('weird' or 'pretentious' common pejorative terms for anything remotely experimental when I was an undergrad in the 90s, however canonized it was). But that could be a subject for an entire book. The likes of Amis and Hitchens weren't exactly anomalous to this process.

... and this is why the likes of David Lynch ended up being hailed as some avant-garde saviour, but we've beat that drum already!

- It's very different now, where the trend seems to be over-identification with children and teenagers ...

I like this notion, and perhaps one conclusion to draw is that postmodern retro culture is split into two stages? Ie. an early Reaganite phase which was all about over-love for a past of parents, fifties nostalgia, authority, Major's Back to Basics, etc; and a later post-Blair one that is everywhere characterized by over-love for kids, infantilism, consumer toys, Supernanny etc.

I reckon there's a 'shadow' to all this, where a certain generation feels dejected and somewhat depressive (whether acute, or a permanent 'frequency' in the background). Hence the huge western investment in 'feel-good' industries - from crisis-level mental health treatments, to 'positive thinking' management, to narco-trafficking, to the general infantilising effect of the media and its toys. A generational 'rite of passage' was missed in a sense, hence the soma required to ignore it. With 'security' (itself a rather childish obsession, like the permanent 'outsourcing' of war), this 'maturity gap' has led to the only real growth industries since the 80s.

You fellows should acquaint yourselves with the awesomeness that is Joe Bageant:

Hospital ship. Oh yes. I'm now delighting in introducing my 25 year old kids to it. It's a properly disturbing book that hides in the corners of your mind for years and keeps popping back every so often.

The very end of the 60s and the early 70s were an extraordinary and under-reported time in so many different artistic fields. The New Worlds authors from that time especially are all well worth chasing down.