An Offence On The Buses 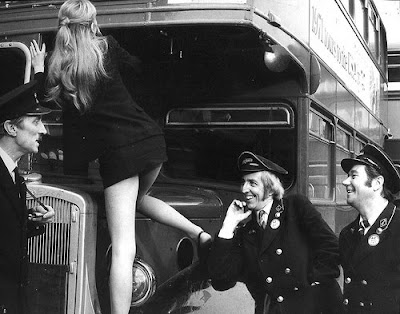 There’s a term, “permissive populism”, used to describe that feeling of wanting “in” on the sexual revolution of the Sixties, especially as it’s seen to expand and proletarianize through the Seventies. One of the programmes (and a highly popular set of subsequent spin-off movies) that best captured this was On The Buses.

Deeply crass and unlovely, populated by every kind of gurning and winking caricature imaginable it still exerts a strangely magnetic hold over the viewer today, reminding us that truly the past is “another country”. The T.V. series and the films detail the pranksterish exploits of a couple of rotten-looking middle-aged men on the prowl for easy sex with the Clippies, female bus conductors, though (being feckless working class sybarites) they are also equally intent on getting away with as much as they can in terms of shirking, bunking-off, rule-bending and tormenting their Supervisor Blakey. Reg Varney’s Stan never quite gets his end away (he’s a kind of brylcreemed homunculus, half cheeky, bullying little boy, half middle-aged lecher, a left-over from the Fifties who flounders, unable to adapt to the "modern" Seventies) who also has contend with the miseries of a cramped working-class home life, his mother, repulsive sister and stoical husband, the horror of whose sexless union serves to reinforce the misery of marriage. Leering sexism, molestation and aggressive innuendo seem to be the boys seduction techniques, all of which are naturally regarded as merely cheeky or saucy by the sexy, young, permissive Clippes and only frowned upon by castrating middle-aged gargoyles (in the first of the movies a phallic phalanx of female drivers!)


Partly On The Buses buys into both generational resentment and generalised optimism: the young are getting their end away, sex having been, as Larkin had it, “invented in 1963”, the older generation may have missed the love-boat (at least the eternally frustrated everyman Stan has) but the hideous Jack, with his cadaverous Dark Ages fizzog and asymmetrical gingivitis raddled leer, through knowing “what birds want”, gets plenty of crumpet, suggesting that it’s out there for all, no matter how gruesome, if you just know how to play the game. On the Buses is there to persuade the bored working class man that sex is everywhere, they are all gagging for it, you just have to give them a nod and a wink an you’ll be having a knee-trembler round the back of the canteen in a flash.

There is large extent to which all this is simply the extension of a long British tradition of saucy seaside postcard humour and the endless male pub-bullshit circles where everyone pretends they’ve got three birds on the go at the same time and that last night, yeah, they shagged this model they met in a club in town. And never prematurely ejaculated. Or couldn’t get it up for nerves. It continues today leavened by irony and a certain post-modern knowingness with the Lad’s mags. But to some extent the Seventies starts to open this fantasy space up to a sense of real possibility. The Pill has helped to (I’m into Larkin again) “push convention to one side” 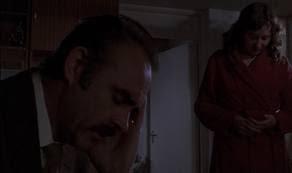 The film which best captures the rage, the torments of the fantasy that everybody else is getting it while you’re not, of the fantasy of the “plaything”, the women who will respond with nothing but pleasure and amusement to whatever the man does to her, who melts away the anxiety of failure and instinctively responds to and chimes in with the man’s articulation of his desire, precluding the possibility of the cold, imperious reverse gaze of the sexually disappointed women, is Lumet’s The Offence.

There’s a lot to be said about The Offence, a portrayal of a policeman sliding rapidly into madness and murder. Possibly Lumet’s best film, almost certainly Connery’s it would be reductive to say it’s merely or primarily a film informed by “permissive populism” but it’s certainly a strong strand, and in a way The Offence stands not just as a corrective to the Playboy fantasies of James Bond but also the warts-and-all chirpy bonk-a-thons of the Confessions series. In his questioning of the suspected child rapist Baxter the structures of Johnson’s fantasy are laid bare (there’s plenty of class resentment in there too), though the exact nature of Johnson’s sexuality is never revealed, he may be a paedophile, he may be gay or into S and M and unable to face these aspects of himself it’s clear that he perceives Baxter as sexually successful and that this is a component of his hostility.

The horrors that pile up on Johnson are domestic, his charmless wife, the emptiness of routine, the ghastly mundanity of police work. Unable to have a meaningful dialogue with his wife Johnson finds someone to talk to in Baxter, on to whom he projects all his resentment, unwittingly revealing too much of himself in the process. Sexually powerless and unable to acknowledge or act on his desire he still has violence on his side and in his murder of Baxter he attains a fulfilment that has been absent from his private life. His interrogation and murder of Baxter is sexualised and deeply uncomfortable to watch: this is one terminus of the fantasy of the sexual availability of women, male on male violence. In his reduction of the soft, effeminate Baxter to his “plaything” , in the (to his mind) justifiable assault on a man who is presumed to be a child rapist Johnson acts out his own frustrated desire to be looked upon with awe, to be a focus of desire, to be in control, to reach out and touch without fear of consequence.

The Offence, (which I’ll return to later) in this way does overlap with On the Buses, rather as they both overlap with Hitchcock’s difficult Frenzy in their assumptions about how sex and social relations operate in the wake of the Sixties and in the ways this impacts on the male senses of impotence and entitlement. 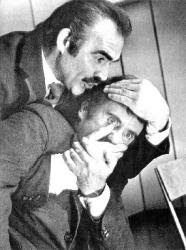 I reckon a lot of these attitudes and imagery had a disorientating effect on kids who grew up then (both sexes). Expectations that were sorely frustrated by changes in social/economic attitudes - and of course the ascent of AIDS - by the time they came of age in the 80s.