Back To The Future 2

"The essence of Tao is reversal"
- the Tao Te Ching

As Western civilisation begins its long, slow powering-down (or at least let’s hope it’s long and slow rather than short and fast), then we will more and more experience the uncanny feeling of time moving backwards, of technologies and habits that we had thought long consigned to the past mysteriously reappearing through a gradual process of osmosis. It might even be the case that those under the age of 30 experience some of these re-appearances as examples of genuinely new phenomena, and like the Romans, whose 400-year decline could barely be detected in normal daily life, mistake them as evidence of yet more progress.

The recent upsurge in oil prices, caused by the political turmoil in the Middle East, has provoked amongst the British public and its government that occasional and somewhat incoherent recognition of the reality that our technologically advanced, dynamic, globalised economy is pathetically reliant on a single resource, fed by a fragile infrastructure from a volatile region of the world that is made volatile by the very exploitation of that resource. If oil prices maintain or exceed their current high level, these are some of the technologies and habits of the 1970’s I expect to see gradually returning: 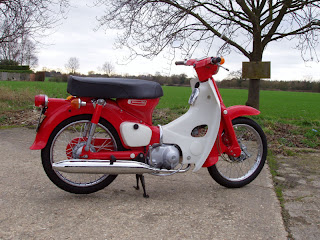 Contrary to popular myth, most of two-wheeled motorised transport of the 1970’s didn’t consist of chic Italian Vespas or muscular Triumph superbikes, but this kind of deeply unsexy machine - the Honda CL90. Usually used as transports to and from the workplace, and rarely ever cleaned or serviced, their users eschewed leather suits and ballistic crash-helmets for flasher macs, sou’westers, and curious brimmed crash-hats with goggles mounted atop.

Nowadays these kind of machines are usually associated with third-world countries, and their mass re-appearance on British roads should be taken as confirmation that, yes, Britain is indeed becoming a third-world country. 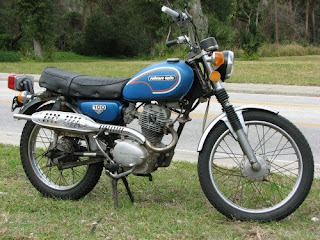 "Hairdryers" was the derisive term given to the kind of low-powered motorbike (100-125cc) chosen by many working-class adolescents as their first mode of personal transport. Looking and sounding like feeble impersonations of standard motorbikes, their users would often attempt to infuse the bike with an intimidatory presence by removing the exhaust silencer, resulting in a piercing, rasping sound that would induce belly-laughs from onlookers as they cruised around provincial market squares. 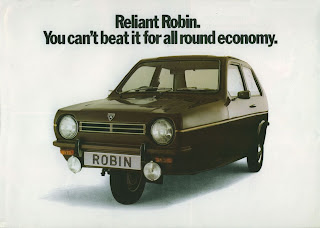 The Reliant Robin (always called the Robin Reliant in the popular discourse of the time) was of course given iconic status in the sitcom "Only Fools And Horses", and the fact that it was the Trotter’s mode of transport was deeply symbolic. As an icon of a kind of hopeless British crapness, its adoption by the Trotters as their mode of transport was an indication that for all their striving, these guys were going nowhere.

It may be a baffling concept to us now, but at the time it made a certain kind of sense. Having only three wheels, it was classed as a motorbike for road tax rates, but could be driven by the holder of a car licence. Its lightweight construction and small engine were also of great advantage in terms of fuel consumption, a precious advantage in the fuel-starved 70’s. During the great oil glut of the last twenty years, gleeful "petrol-heads" like Jeremy Clarkson have taken great joy in destroying old Robins in weirdly atavistic acts of sacrifice - as though the car represented a kind of ancestral stain that had to be ritually repudiated so that the gods of Neoliberalism would ensure the endless bountiful flow of BMW’s and the magical mana-juice to power them.

Jeremy, expect some kind of three-wheeler to return as fuel prices steepen and road taxes escalate. Only EU crash-test standards can possibly stop them. 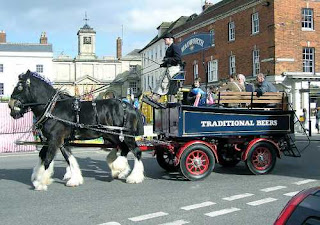 You might think these disappeared sometime in the late 19th Century, but they were still an occasional sight in the 1970’s. Horses are of course deeply magical animals with a strange and mysterious affinity to humans, and the reappearance of working horses on our streets is something that I expect will have a profoundly uncanny affect. It will effectively signal that our Faustian delusions of boundless growth into infinity are over, and the re-enchantment of the world has begun.

Very common in the 1970’s, and already starting to make a re-appearance as far as I can tell. When they switch from white vans to flat-bed carts pulled by an old horse that has been reprieved from the knacker’s yard, then you will know that the new 70’s have begun. 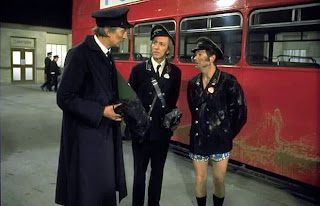 See Carl’s post below. Up until the late 70’s, the vast majority of people would travel to work either by bicycle or bus, and factories and offices would often have bus bays where they now (if they still exist) have vast floodlit car parks. As public transport once more becomes the prime mode of mobility in the economy, the Government will be forced to reluctantly admit that it is too important to be left to the inefficiencies of the private sector, and it will gradually come back under either national or regional government control. One important increase in efficiency will result from the realisation that it’s much quicker to sell people tickets once they’re on the bus than making them queue to buy them off the driver.

As British people find that increased fuel and food costs erode their disposable income, they will have fewer opportunities to visit out-of-town superstores and buy cheap Chinese-made tat. The result will be an epic contraction in the retail sector, followed by a realisation amongst the surviving outlets that it simply isn’t cost-effective to be open morning-to-evening, seven days a week. Sunday closing will therefore quietly and surreptitiously return with perhaps the only people noticing being pious Christians, who will attribute the phenomenon to God’s wisdom.
Posted by Phil Knight at 08:14

Put that way peak oil is something to be looked forward to & embraced.

As a militant pedestrian, I can't wait!