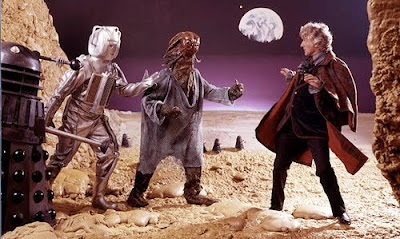 How precarious life in Britain was in the 1970’s. Without really knowing it, we were under attack from all angles, a relentless barrage of aggression that made the Blitz look like a disagreement over bric a brac at a jumble sale. As most of us went about our business (buying paraffin, listening to Slade records, going on strike, wearing massive trousers, smoking) our sceptered isle was a secret war zone, our lives and way of life threatened from under the sea, under the ground, from the future, from the distant past and from the farthest, coldest, darkest recesses of intergalactic space.

As a child, I would lay awake and wonder what would become of us if it wasn’t for Dr. Who. Exiled to Earth, he was the one thing that stopped us time and again from invasion, subjugation, annihilation - and he didn’t even really want to be here. Imagine the UK without the Doctor, and in short time we’d have been over-run by animated inanimate objects, held to ransom by aliens, taken over by an ancient race of reptiles, then ravaged by a savage war of conquest between those self-same reptiles and their ruthless aquatic cousins, mankind reduced to hapless observers, slaves, forgotten, impotent witnesses to the end of civilisation as we knew it. 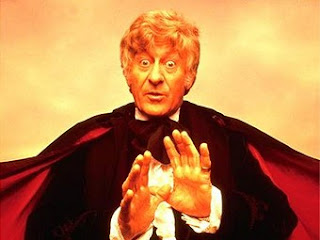 Not surprisingly, I hero-worshipped the 900 year old alien responsible for keeping me alive and sought to pay him tribute by watching his struggles of a Saturday tea time, buying his chocolate and keeping the wrappers, eating his cereal, wearing his badges and, most of all, obsessively reading his annual reports which were published each year in time for Christmas.

There is no-one that has ever had as big an influence on me as the Third Doctor, including family members, which is not so much a reflection on them as an indicator of the sort of person I would grow up to be: fickle, and more interested in the imaginary and ephemeral than the here and now, the there and then, the mundane nuts, boring bolts and less than riveting rivets of real life. It’s desperately sad, of course, I know that but the pitiful nature of that revelation doesn’t negate its truth.


Dr. Who taught me that life is tentative, random, fragile: one minute you’re riding your bike to work, the next you’re being blown away by a dapper shop dummy. It also taught me that, as a species, we’re nowhere, not ancient, not adaptable, technologically backward, fatally vulnerable, helpless.

In a time when plastic flowers and sofas could, and did, kill, we needed a much older, far wiser head to watch our backs. I miss that. Precarious life might have been back then, but I felt safe, reassured. Now, I’m permanently on edge, and life is revealed as a game of cards on an oil rig, soon to be interrupted by a heat ray wielding terrapin with a wet vest and murder in mind.

Unmann-Wittering.
Posted by Found Objects at 18:00