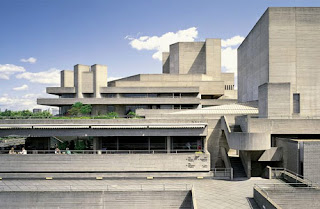 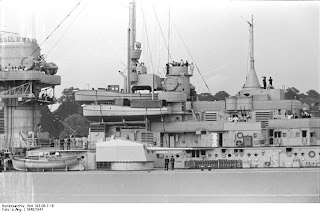 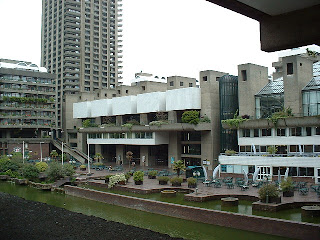 Email ThisBlogThis!Share to TwitterShare to FacebookShare to Pinterest
Labels: Coming In At An Angle 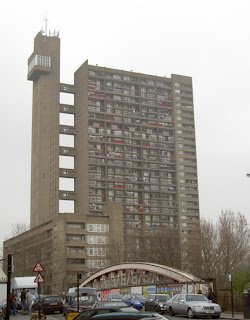 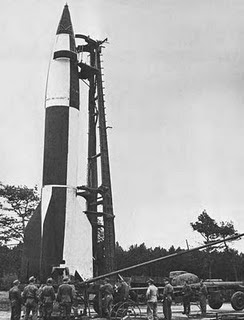 Email ThisBlogThis!Share to TwitterShare to FacebookShare to Pinterest
Labels: Working Out Unconscious Trauma Under The Guise Of Progressive Rhetoric 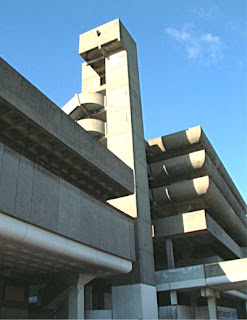 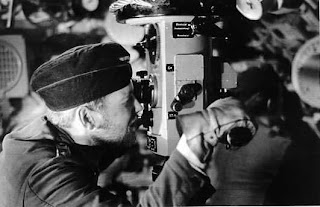 Email ThisBlogThis!Share to TwitterShare to FacebookShare to Pinterest
Labels: Brutalist Architecture As Ossified Will To Sacrifice

Please Stand By, Pt. 2 - An Inventory of Effects 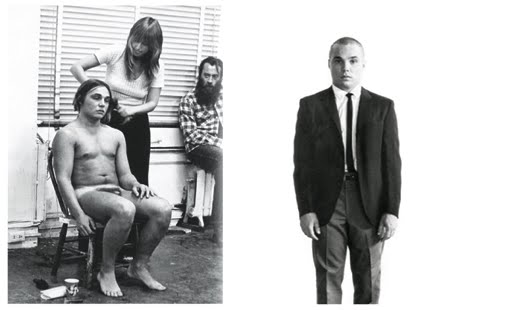 Here we have the American artist Chris Burden, looking like a professional and presenting himself to the world. The above photos come from his 1971 performance art piece I Became a Secret Hippy. It was one of Burden's earliest works, executed about the time he was completing his graduate studies at the University of California, Irvine. For the piece, Burden stripped naked and laid down on the floor while a friend hammered a star-shaped stud into his chest. He then sat in a chair while another friend shaved his head with electric shears. Burden then donned the suit of an FBI agent and presented himself to the event's few attendees.

The real-world incidents that inspired I Became a Secret Hippy are so obvious that they don't warrant an explanation. In that respect, it was far from being a subtle work. But considering that it was done at the time that Burden was leaving the cloistered confines of academia and making his transition into the world of professional artmaking, no doubt its ritualistic, rite-of-passage mimicry held some ironic personal meaning for the artist.

By many accounts, the early Seventies were considered turbulent years -- a time of political, social, and economic upheaval. Most Americans had entered the 1960s with an optimistic vision of the future that awaited them. But a decade later, it all looked uncertain and many people were getting anxious and doubtful, not daring to guess what might happen next. A common, knee-jerk opinion on the street had it that the world was going to hell. "Shootin' rockets to the moon / Kids growing up too soon… Ball of confusion!"

Soldiers returning home after numerous tours of Vietnam reputedly experienced something akin to culture shock, finding things at home much different from when they'd departed. The rapid pace of technological change, and the societal shifts that resulted, had some in the pop-sociology realm talking of "future shock."

So when people read that somewhere a young man had someone shoot him with a rifle and then called the whole thing art, a number of people were shocked, but probably not all that surprised. This is what passes for art these days. The way things were heading, why not? 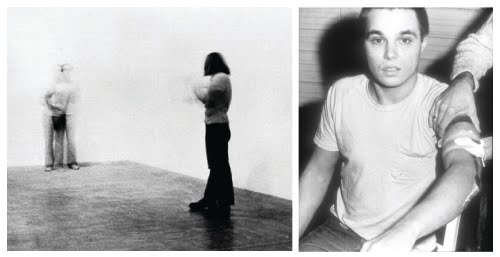 The incident in question -- the one that would become Burden's notorious "greatest hit" -- was Shoot, which followed I Became a Secret Hippy by a mere three weeks. On the evening of November 19, 1971, Burden and a few associates and a small number of attendees met in a low-rent art space in Santa Ana. It was, by most accounts, a pretty modest and casual affair, up to the point when -- at an "Okay, let's do this" moment in the evening -- Burden positioned himself against one of the gallery walls. A friend then raised a .22-calibre rifle, took aim at Burden, and fired a single shot.

The plan was a have a handful of spectators witness a William Tell-styled act of trust, with the designated shooter aiming at the wall just to the left of Burden's shoulder. At the most, Burden later claimed, the rifle slug was only supposed to graze him. But due to poor marksmanship the bullet instead hit Burden in the bicep of his left arm. Not having anticipating such an outcome, no one had thought to bring a first-aid kit, so a bandage had to be improvised.

Before we go any further, a brief overview might be in order...

Chris crams himself into a small metal locker for five days.
Chris gets shot.
Chris lies in a bed for 22 days.
Chris lies down under a tarp in traffic along a busy boulevard.
Chris nearly immolates himself.
Chris dangles naked tied by a rope around his ankles.
Chris crawls over broken glass.
Chris pushes live electrical wires into his bare chest.
Chris has people use him as a human pin cushion.
Chris runs the risk of immolating himself again.
Chris gets crucified to a Volkswagen.
Chris nearly drowns himself.
Chris gets kicked down two flights of stairs.
Chris nearly sets himself on fire. (Yes, again.)
Chris lies on a shelf, just out of sight, for 22 days.
Chris lies, unmoving, under a sheet of glass for 45 hours straight.
Chris bicycles through Death Valley.

Chris does a bunch of other things during these years, but it's the more violent and alarming and supposedly masochistic things he does that everyone talks about. Thereby making him a bit infamous in the process, saddling him a reputation as the "Evel Knievel of the art world" that he grew to resent. 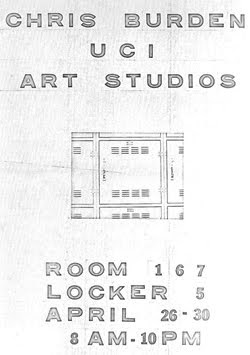 Chris Burden didn't consider himself a "performance artist," nor did he ever aspire to be one. He'd originally set out to be a sculptor. In the latter years of his studies, he became preoccupied with the task of creating interactive sculptures -- works that invited the audience to become a part of the piece, that were meant to be engaged and manipulated by the viewer. But he quickly became frustrated and deemed many of his works to be unsuccessful, because each time the audience balked at the invitation, choosing instead to maintain the role of distant and passive spectators.

To remedy this impasse, Burden decided to physically make himself a part of the "sculpture," if not the primary component of the work itself. He did this for his senior thesis project, which involved cramming himself into a 2' x 2' x 3' steel locker for the duration of five days. As word of the Burden's project circulated around campus, the curiosity factor brought a steady flow of visitors. People sat outside the locker, inquiring into his well-being and asking him why he was doing what he was doing. A few people sat for extended periods and -- perhaps confused by the dynamic -- treated him like a Father Confessor and divulged all sorts of personal details about themselves. During the final day of the piece, university administration were debating whether to have the locker cut open, fearing for their own liability in connection with Burden's project.

So, problem solved. But noted for future reference: How to calculate for the vagaries of interpersonal psychology? 1 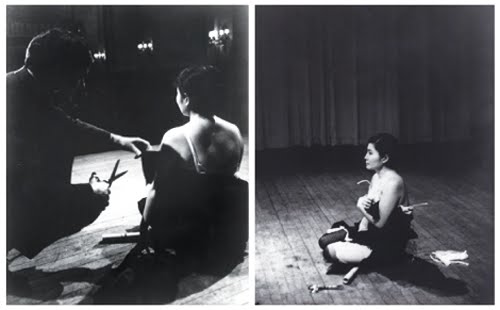 Performance art was, of course, something of a big deal in the artworld of the 1970s, and Chris Burden was regarded as one of its leading and most controversial pioneers. But performance art wasn't such an entirely new thing. It'd first been kicked around by the Futurists and the Dadaists in the early part of the century, then gone dormant for many years before being reanimated in the 1950s and 1960s, primarily by way of the "happenings" staged by John Cage and his disciples in the Fluxus movement.

If there was any recent historical precedence for the type of work Chris Burden was executing in the early '70s, it was probably Yoko Ono's 1962 Cut Piece, which involved the artist sitting silently on a stage and inviting the audience to cut of here clothing piece by piece with a pair of communal scissors. On the three occasions that Ono staged Cut Piece during the mid-1960s, the audience obliged her each time, in the end leaving the artist sitting on stage wearing little more than scraps and tatters.

Cut Piece is an often-cited work in its own right. Critics often speak of how the piece addresses gender dynamics and how these dynamics play out in terms of social power and status. But in a broader context, one could argue that it ultimately points to an interrogation of the codes of conduct in a supposedly polite society, one which eventually (or hopefully) leads to a critique of the nature of socialization itself. 2 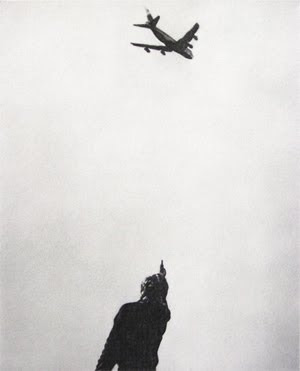 On the morning of January 5, 1973, Chris Burden walked out onto a beach near the runways of LAX and fired several shots from a revolver at a 747 as it flew overheard. Burden later explained that the piece was about "impotence," since he knew in advance that the bullets would fall short of their target. Impotence in this case meaning bold but futile gestures, the inadequacy of human agency in the face of the grander scheme of things.

Still, unsurprising to learn that the FBI showed up on his doorstep with some questions about the incident a few days afterwards. 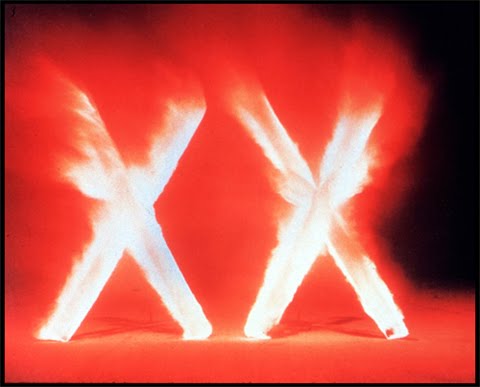