"Not even a bagpipe band?"

This is a fascinating lecture in all sorts of unexpected ways, but the biggest revelation is Lyndon Johnson's surprisingly pathetic and increasingly desperate pleading to Harold Wilson to provide British troops to help the Americans in Vietnam. You even start to wonder if the USA was ever really a superpower at all, but rather a much smaller country that found itself in the invidious historical position of having to imitate one.

Email ThisBlogThis!Share to TwitterShare to FacebookShare to Pinterest
Labels: Vietnam

We merely suggest that it could have existed

Email ThisBlogThis!Share to TwitterShare to FacebookShare to Pinterest
Labels: JFK

It was all ice out there tonight

Sorry to post on top of Paul, but remembered Trevor Griffith's Comedians and thought: wonder if Russell Brand had watched it recently?

The Wolf in Man

Here's a belated Halloween entry, about the not outstanding but quite good for what it is Amicus horror film The Beast Must Die (1974), which despite some ropey plotting and unconvincing special effects has a few interesting edges to it.Since werewolves are already covered here it seemed worth a go. 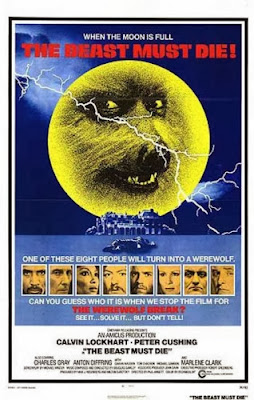 The Beast Must Die is built around the central gimmick that the audience is asked to guess who the werewolf is amongst those gathered at a millionaire's country mansion. The film breaks a quarter of the way through and offers the audience a few moments to weigh up the evidence in each suspect werewolf favour. As such the film can basically be boiled down to an Agatha Christie plot plus werewolf, although the audience participation gimmick is actually pointless thinking it through: the film-makers are asking the audience to do nothing more than they will already be doing anyway.

Calvin Lockhart plays the lead role, a sportsman who has transformed his country mansion into a panopticon, in which himself and his security team can sit at the centre and monitor the activities of his house guests through a bank of CCTV screens. Coincidentally, or perhaps not, The Conversation came out in the same year, suggesting this was the right time for paranoiac surveillance culture to really get going in the public imagination leading on from Watergate. Unusually for a British horror film (or any film of this era and probably since) the hero is black, depicted as arrogant and ruthless but not stupid or malicious, and shown as far more successful (financially, socially, physically) than his white house guests. Newcliffe's wife Caroline (Marlene Clark) is also black and not depicted stereotypically. Influential here perhaps are the possibilities of casting American lead actors for distribution in the USA, and the influence of blaxploitation that partially encouraged the casting of black actors in well-rounded and non-stereotyped roles (again concerns here were more likely financial than egalitarian, the marketing of films based on the breakdown of 'the audience' into analysable demographics). In much of the promotional material however Peter Cushing is emphasised over Lockhart, again possibly not dubious as placing Cushing on a horror movie poster is smart money, but still. Although the tension between Newcliffe and his houseguests is never expressed verbally as racial in nature, the possibility is there, a sense of resentment at Newcliffe's success compounded with racism.

From a different angle however, The Beast Must Die is maybe perceptive in that in order to accommodate to the ruling capitalist class traits such as race can be de-emphasised when presenting the right attitude and accoutrements. To do the things you must do you don't need to be anybody in particular. Here the image of Newcliffe, sitting behind his screens monitoring life in the enclosed world of the mansion, drifts towards the horror-film reality of shoot-to-kill lists and air-conditioned huts in the Arabia Peninsula. Newcliffe is prepared to kill anyone of the depersonalised figures who walk across the camera's field of vision, to track and kill them in the most productive sense possible; the image marries up well with Harry Lime's declaration about the ease of bumping off the black dots far below, although as the army can tell you the dots can be even closer than that and still be easy to take out with a button push of the controller. Newcliffe does not even spend most of his time watching the screens, subcontracting to a team of hired surveillance experts who keep watch from their hidden room at the top of the house while below Newcliffe entertains his guests.

The plot of the film is essentially fluff. The guests wander around the house, there are a few interesting character details, some appearances from a deeply unconvincing werewolf (in some scenes it is literally a big dog wandering onto set), and there are some words of wisdom from Cushing about the rule of werewolves and silver that doesn't stay quite consistent through the film. Not to spoil the reveal, the film ends with Newcliffe deciding to commit suicide after being infected from a werewolf bite. Here some of the racialised resentment perhaps becomes more apparent as Newcliffe is made to die for the folly of his success. In order to win, Newcliffe has had to destroy his entire life, not just himself but what he has worked for and what he has held dear. 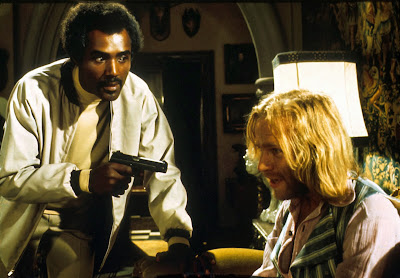