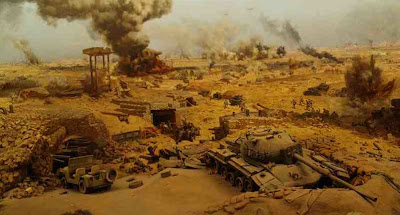 "How did Israel benefit the United States? Its advocates point to the PLO-Jordanian faceoff in 1970, during which Israeli threats thwarted a possible Syrian intervention and perhaps saved the throne of Jordan’s King Hussein. They cite the success of American arms deliveries during the October 1973 war, which helped persuade Egypt to abandon its Soviet orientation for an American one and make a separate peace with Israel. They note the decisive victory of Israel’s American-supplied air force over Syria’s Soviet Migs in 1982, which demonstrated to the world the superiority not only of Israeli pilots, but of American technology. They point to the captured Soviet weaponry Israel turned over to the United States for examination. They note Israel’s permission for the U.S. Navy to port in Haifa, Israel’s technological advances in drone warfare, and myriad other matters. Proponents of the alliance make the broader argument that Israel has kept the peace in the region. As Martin Kramer, a former Israeli academic who is now a leading advocate for Israel in the United States, puts it, Israel “underpins the Pax Americana” in the Eastern Mediterranean. When the United States kept Israel at arms length (from 1948 to 1973), there were four wars; with the onset of the special relationship and with universal acknowledgement of Israeli regional military superiority, the wars have been small and easily contained. If only, Kramer concludes, the United States could be so fortunate as to have another Israel to protect its interests in the Gulf, its strategic position would be rosy indeed."

"If these arguments are not airtight, they shouldn’t be dismissed. As Stephen Walt and John Mearsheimer — hardly staunch advocates of the special relationship — acknowledge, a strong case can be made that Israel was, on balance, a useful ally for the United States to have during the Cold War. It is not an open and shut case. How and why, one might ask, were the so-called “radical Arabs” whom Israel helped to contain and defeat radicalized to begin with? Would Arab states have sought Soviet support absent their conflict with Israel? Speaking before a private group in 1975, Henry Kissinger said that it is “difficult to claim that a strong Israel serves American interests because it prevents the spread of communism. It does not. It provides for the security of Israel.”