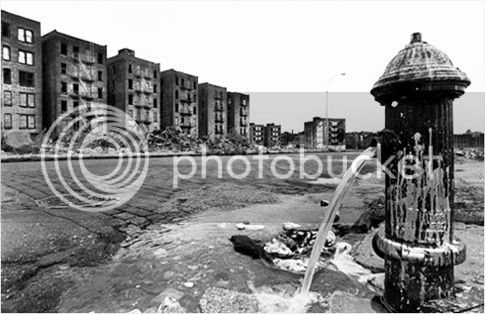 Certainly the End of Something or Other, It Seemed

"Do you think a city can control the way people live inside it? I mean, just the geography, the way the streets are laid out, the way the buildings are placed?"
"Of course it does," she said. […]
"Yeah...But thinking that live streets and windows are plotting and conniving to make you into something you're not, that's crazy, isn't it?"
"Yes," she said, "that's crazy--in a word."

- Samuel R. Delaney, Dhalgren
“Architects tend to be idealists and not dialecticians.”

In 1975, science fiction author Samuel R. Delaney published his eleventh novel, Dhalgren. Weighing in at 800-plus pages, knottily metafictional, equally praised and reviled by readers and critics alike, Dhalgren would prompt comparison to another similar novel that had appeared only two years previously -- Thomas Pynchon’s Gravity’s Rainbow. Commenting in an interview years later, Delaney countered, "Gravity's Rainbow is a fantasy about a war that most of its readers don't really remember, whereas Dhalgren is a fairly pointed dialogue with all the depressed and burned-out areas of America's great cities. ...To decide if Gravity's Rainbow is relevant, you have to spend time in a library. ...To see what Dhalgren is about, you only have to walk along a mile of your own town's inner city."1

In many respects, Dhalgren was very much a product of its time. The setting of Dhalgren involves a city -- a fictional city called Bellona that lay somewhere in the American Midwest, a city that has been cut off from the rest of the country by some mysterious and unexplained rupture in the space-time continuum. Post-apocalyptic, ethnically diverse, gang-infested, and pornographically rife with all nature of pan-sexual couplings, Bellona embodied the cultural phobias that many Americans held about the nation's metropolitan centers at the time -- represented many of the reasons that the white middle classes had fled in ever-increasing numbers to outlying suburbs over the two preceding decades. It was the sort of setting that would appear again and again in the years that followed, often in films of the "urban exploitation" nature; films like John Carpenter’s Assault on Precinct 13 and Escape from New York, The Warriors, Fort Apache: The Bronx.2 If this setting would had become a predictable cliché by decade’s end, it was a cliché that hinged on an underlying Hobbesian-Darwinistic dread that much of America had about the fate of its urban centers. As Richard Nixon had reputedly mused to his aides at some point in 1972, "Maybe New York shouldn’t survive. Maybe it should go through a cycle of destruction." 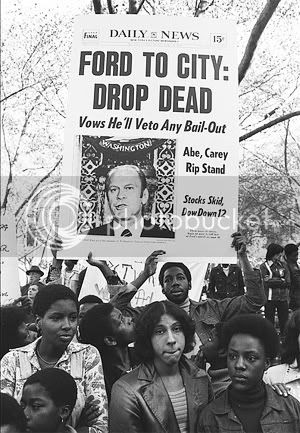 Another artifact of the era was the 1979 documentary 80 Blocks from Tiffany’s. Focusing on life among black and Puerto Rican gangs of the South Bronx, the film graphically illustrated the advanced urban decay and socio-economic breakdown that afflicted the South Bronx in the late 1960s and the 1970s. The film's very title is curiously awash in ironic implications. Firstly, in its highlighting of distance and economic disparities, but second in the way these disparities invoked a specter that haunted the history of modern urbanization from its very origins -- pointed to a social legacy that could be traced back to the "Haussmannization" of Paris in the previous century.

Eighteen years in the offing, Baron Georges-Eugène Haussmann's redevelopment of Paris was the most ambitious and expensive undertaking of its sort in modern history, requiring inconceivable amounts of leveraged financial backing and a labor force that employed upwards to one-fifth of the city’s working population. It amounted to an infrastructural overhaul that completely transformed the city. The project required the dislocation of thousands of the city’s citizens, the course of which resulted in the destruction of numerous poor and lower-income neighborhoods (those potential pockets of political unrest in the Second Empire); in the end pushing much of that population into slums on the city’s margins. In the place of some of these demolished neighborhoods arose housing for the city's more affluent and middle-class residents, districts in which the broad avenues converged on a series of arrondissements and commercial hubs that included such newly-built department stores as Le Samaritaine and Le Bon Marché. 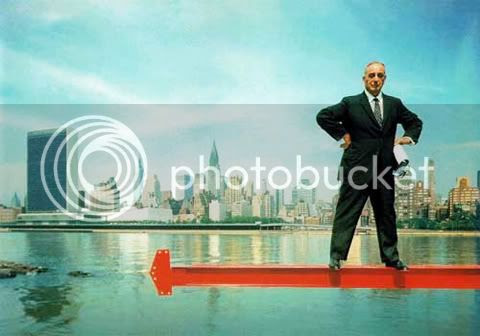 Haussmann’s Paris would become a modern model city for urban planners the world over, and an inspiration to American twentieth-century men of vision such as Daniel Burnham, Frederick Law Olmsted, and Robert Moses. Hailed as a "master builder," it was Moses who presided over the extensive projects of city planning and urban renewal in New York City from the late 1920s through the 1970s. It was also his Cross-Bronx Expressway -- begun in the late 1940s and completed in 1972 -- that many critics blamed as the primary factor in the demise of the South Bronx. Between the Expressway and the compounding factors of "white flight," strained social services and budget cuts, and the city's policies of municipal redlining and "planned shrinkage," the neighborhood entered a steep downward economic spiral. Within the span of a few years, the blighted South Bronx would become -- as a sort of idée fixe in the public imagination -- the epitome of an "urban wasteland," a testament to the dysfunctionality, failure, and obsolescence of the modern city.3

By some accounts, the mid-1970s may well have marked the official end of the Modernist social vision. The demolition of the Pruitt-Igoe housing project by the city of St. Louis in 1972 was framed by many as de facto evidence of the failure of modern urban renewal and social engineering. That same year, architects Robert Venturi, Denise Scott Brown, and Steven Izenour published the first edition of their anti-Modernist decree Learning from Las Vegas. The following year brought Daniel Bell’s The Coming of Post-Industrial Society. And in 1975, Robert Caro’s The Power Broker appeared -- a comprehensive and deeply critical account of the life and career of Robert Moses that met with a broad readership and would eventually land a Pulitzer.4 The ground was shifting, all that was solid was melting into air. 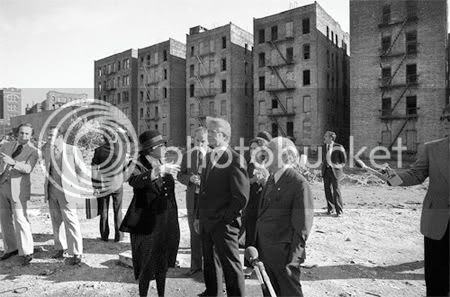 1. No doubt Delaney’s dismissive remarks will rankle some readers. So perhaps it should be pointed out that numerous critics have argued that Gravity’s Rainbow couldn't have been more crucial and timely. Publishing in the midst of the Watergate disclosures in 1973, the book's unstable narrative unfolds in a densely intertwining sprawl of conspiracy theories, shadowy global alliances, conflations of actual and speculative histories, the irresolution of its narrative and structural slippage embodying the paranoia of its milieu. As author and historian Andreas Killen summed it up, Gravity’s Rainbow is ultimately about how "the loss of historical consciousness becomes a function of image culture...and its rewriting of the past" in contemporary/postmodern America.

3. Sociologically, this all shaped up in a very tautological fashion. Advocates and apologists for increased suburbanization routinely pointed to the decline of inner-city conditions to argue for the increased relocation of jobs and families to the suburbs, conveniently ignoring the very same relocations were in part responsible for the conditions in question.

4. Adding another pivotal book to this stack, Gayatri Spivak’s English translation of Jacques Derrida’s Of Grammatology appeared in 1976.

As someone who only knows 'New York' through film, books, TV etc., it's striking how its fictional image shifted by the 90s. From what Robin Wood defined as Hollywood's 'excremental city' (Midnight Cowboy to Cruising and dozens of gang/vigilante flicks, cop shows etc.) to the Guliani-era 'whitewash' familiar from sitcoms like Seinfeld, Friends and Sex and the City.

There was a famous take-down of the new 'serious' Woody Allen by Joan Didion in 1979, which seems applicable to numerous New York sitcoms and romcoms now: the tidy problems, adolescent attachment to fashion and cultural badges, and the rareified, safe spaces where their audience-flattering stories take place. When I think of 'New York', even Neil Simon seems kind of rough compared to the way it's depicted now.

Right, like I said, there are many other films that could be cited in this context "Cruising" being one of many that came to mind. Then there's the linkage between "Death Wish" and Bernie Goetz. Etc, etc, etc. And film was only representative of what was going on in the city itself -- e.g. the transformation of Times Square from the late 1970s to the early 1990s being the central example. The gradual "'Disney-fication' of NYC" as some people starting calling it nearly 20 years ago.

In the late '70s, the city started up with the whole "I (Heart) NY" ad campaign in a big concerted PR effort to rehab the city's image. Some might argue that everything that followed was just the city being able to finally put its money where its mouth was. (Of course, there was far more to it than that.)

And I believe a fair amount of the film/PR aspect of all of this is covered in this recent book...

...although I've yet to read it, myself.

Musically there's always the 'wild card' of hiphop of course, still closely identified with NY even after it's spread to every continent.

It made the punk/nowave you had in the previous post seem like a blip in the scheme of things. The bands that hark back to that sound now seem just a little too scrubbed and studied - cleaner drugs and more career options?

As for the rebranding of NY - Tony Blair pretty much attempted that with this whole nation - the strange fantasy that web design, conceptual art, property speculation and currency trading could sustain our whole economy.

Well yeah, I figured that it all served as the backdrop/bedrock for hip hop sort of went w/o saying. The transplantation of the Jamaican sound-system/street-party modus to the So. Bronx was very much a scarcity-of-means/mother-of-invention situation.