Down In The Sewer 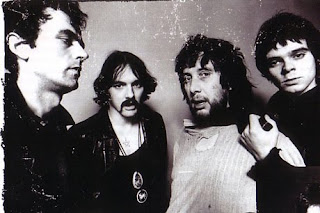 '"Ladies want to weaken us", a lay yogi told me. "They want our semen - they will not say so, but they will rob us of our only power."'

- Agehananda Bharati, "The Light At The Centre"

The Stranglers are one of those bands who, if they hadn’t existed, would probably have to have been invented. Spectacularly malignant even by the standards of their day, their viscous, visceral sound provided the backdrop for the most fetid of lyrical concerns. If misogyny was a commonplace amongst 70’s rockers, with The Stranglers it was ontological. Indeed, to accuse The Stranglers of misogyny is much like accusing Liberace of kitsch.

However, it would be wrong to place The Stranglers in a continuum with what had come previously in the decade. With their debut album, 1977’s "Rattus Norvegicus", there was something very new in the way they portrayed men’s relationship to women. Rather than being cocks-of-the-walk in the Mick Jagger/Robert Plant mould, men are relentlessly portrayed as the weaker sex. Instead of having a whole lotta love, The Stranglers gape into the Mersey Tunnel equipped only with a sausage.

Flaccid and post-coital rather than priapic and anticipatory, the misogyny of The Stranglers was not that of the braggart who treats women like dirt, but of the sexual failure who is reduced to voyeurism and violence. Whereas The Rolling Stones could casually jettison ex-lovers as "Yesterday’s Papers", in "London Lady" it is Jean-Jacques Burnel who is raging about being used and discarded. Underlying all of "Rattus Norvegicus" is the tremendous melancholy born of impotence. "Goodbye Toulouse", "Princess Of The Streets" and "Hanging Around" take us through rain-washed streets and piss-stained alleys with their throngs of love-addicts. Hugh Cornwell is forever pushing his nose up against the window of the brothel and contemplating his next dose of humiliation, while Burnel’s bass rumbles around the back of your skull like a resentful memory.

"Peaches" takes us to the seaside for more heavy-duty ogling, but again there’s no contact, just deluded fantasising. "Ugly" is an extraordinary eruption of inchoate rage, Burnel seething that he can be sexually out-competed by an ugly old fart who happens to have money. The Stranglers understood too well the cord that connects sexual failure with violence.

Finally, The Stranglers take us to where all bodily fluids eventually end up. "Down In The Sewer" demonstrates why they identify so strongly with the rat, enough to make it their mascot. For The Stranglers, sexual desire turns men into rodents - inquisitive, instinctive vermin. Depicting the male sexual experience as one of envy, frustration and humiliation, "Rattus Norvegicus" is the most thorough demolition of masculine conceit ever recorded.

The follow-up "No More Heroes" album, released the same year, was even more combative, though focused more on settling scores with those, real or imagined, who had crossed them. It featured two remarkably offensive tracks that were both inspired by pornography. "School Mam" follows the example of the kind of imported magazines such as "Color Climax" in which the same group of models would perform the same implausible sexual scenario in a variety of mundane social settings. "Bring On The Nubiles", perhaps still a little bit too strong for daytime Radio 2, depicts an equally implausible pre-pubescent orgy, this time given extra brio by the juddering bass-line and Dave Greenfield’s whooping organ, which almost blows a gasket, like an orgasmatron going into meltdown. However, the pay-off line ("I’m high beneath my zip") once more undercuts the song with its revelation of voyeuristic fantasy.

The Stranglers could probably have flogged this attitude forever, but something very strange was happening to them. The first inkling of this was the b-side to the single of "No More Heroes". With "In The Shadows", The Stranglers bypassed 1978, and made the sonic leap straight into 1979. Featuring dub-spacey production, bass as lead instrument, guitars as scratchy ambient accompaniment, and keyboards as synth-alienation effect, they had effectively abstracted their sound, and leapt far in front of their peers.

This new space was explored further on 1978’s radical "Black And White" album, in which their sound was strung out even further. Lyrically too, their vision had expanded. Awash with dread, the songs on the album primarily addressed the Cold War, but also the alienation induced by technology, the relentlessness of time and the atomisation of the individual. Even the remaining misogyny became abstracted, mythical, in the bizarre quests of "Nice’n’Sleazy" and "Toiler On The Sea". As well as being spacious, it is also a remarkably physical record - only Gang Of Four’s later "Solid Gold" can match it for metallic muscularity. Burnel’s bass playing still invokes awe in it’s mechanical suppleness - like pipelines creaking at the bottom of the ocean, or heavy machinery changing gear. Dave Greenfield is a one-man Radiophonic Workshop, equally capable of beaming in sounds from Alpha Centauri or the massage parlour next door.

By the time contemporaries such as Joy Division and PiL had sonically caught up with them, The Stranglers had already moved on. Their last album of the Seventies, 1979’s "The Raven", although considered to be their last "heavy" album, in fact laid the template for the rest of their career (notwithstanding the occasional concept album about alien abduction). Tight, professional, thematically diverse and pop-orientated, it prepared the way for the gradual softening of their sound. The Stranglers would continue to produce great records well into the Eighties, but the days when the Earth would tremble beneath their feet would be long gone.
Posted by Phil Knight at 14:26

They should have made an album called 'Men In Vans'.

They always seemed much more genuinely grubby and 'dodgy' than their punk peers (probably cos they'd been around the block a bit more), no matter how daft the songs got. One of those bands where the public really did know better than the music press.

There's a bewildering number of facets to The Stranglers, though. Burnel and Cornwell were both very well educated, for instance. They seem to have lived six lives each.

One of the things that's missing from these clips is Cornwell's stage patter, which was usually worth the price of admission on it's own. He was forever going on about the size of Greenfield's organ, for example.

Good God, I never thought that anyone would get me thinking, "Y'know what? I feel like giving the ol' Stranglers a spin..." Good work!

Although - like a musical equivalent of Jerry Sadowitz - if the world was going to tremble beneath them I'd prefer it was with vague discomfort. If they'd been accepted they'd have surely been less interesting.

I love this quote...

At the same time we were doing gigs and they fucking hated us and we were starting to get aggressive. Pubs would pull the plug on us and we’d put it back in again.

Yeah, I think one of the good things about The Stranglers is that since they've been deemed persona non grata by all right-thinking critics (for reasons other than their music), their work hasn't been analysed to death, so they're quite fresh to listen to.

In a similar way to Devo, they made misogyny seem 'cool' and trendy for men who like to 'have their cake and eat it'. Their woman hating ranged from casual and flippant to seriously disturbed and embittered. But they also walked the walk! Let us not forget that Hugh Cornwell was a real life woman-beater, or that this was the band who tied a female journalist to the outside of the Eiffel tower for writing a bad review about them. Fundamentally, it is worth remembering that if the situation were reversed, an all-female band writing similar songs about men would not get radio airplay and wouldn't be anywhere near as successful. Most of the 'riot grrrl' bands of the early to mid-nineties never found anywhere near the level of success that The Stranglers did, which only goes to prove that ours is still a society of sickening double-standards.

Actually, it was a male journalist.

That’s right. See link below to a Guardian article that references the episode.
No more feminist historical revisionism, please!
As The Stranglers knew so well, the authentic “Pussy Riot” is merely a period...