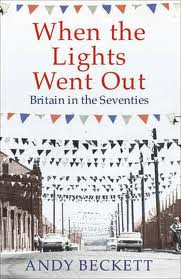 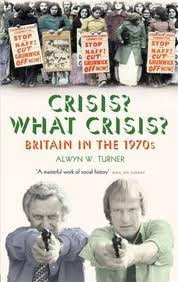 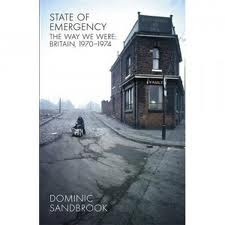 Anyone with an interest in the 70s will no doubt find themselves obliged to read books on the era. At the moment there’s a glut of them, the most recent and heftiest being Dominic Sandbrook’s “State of Emergency” which focuses on but two years (at woeful length) and largely seems to be an attempt to justify the ways of Heath to man or perhaps even less nobly, restore the reputation of Enoch Powell on the basis that he was a monetarist prophet without honour and therefore an unacknowledged force-for-good. Enoch must be alright, he paved the way for Thatcherism!

Effectively “State” feels like a synthesis of two vastly superior books on the seventies Alwyn Turner's “Crisis, What Crisis?” and Andy Beckett’s “When the lights went out”. It probably feels like this because that’s exactly what it is. Reading the three books in rapid succession it will strike home quite forcefully just how derivative of the other two author’s work Sandbrook’s is. Turner gets the occasional nod in the main body of Sandbrook’s book but he has the audacity not only to plagiarise Beckett but then suggest that Beckett’s take on the Seventies as a time “when the lights went out” is the kind of clichéd conventional wisdom about the Seventies that should be overturned.

If he’s getting it wrong stop nicking his stuff then you cheeky cunt! Is the obvious response, which as a humble blogger, I can make with impunity.

So the message is effectively I’d dodge that Sandbrook book if I were you. I mean not just because he’s a Tory, or because he’s obviously a lazy, plagiarising careerist but because it doesn’t give you anything you can’t get elsewhere. Were you to read “When the lights…” which stays away from popular culture but digs deep into the lost possibilities of the Seventies, “Crisis..” which takes on the popular culture of the time very broadly and John Savage’s “England’s Dreaming” which is exhaustive on the counter culture, you’d have a pretty comprehensive road map of the times.


An additional and important contrast between Beckett’s and Sandbrook’s books, and one that makes his “correction” of Beckett even more grating, is that hoary old trope about Making History Come Alive. Sandbrook’s Seventies are a tedious museum piece compared to Beckett’s for a number of reasons, firstly because the Seventies seem to be important enough to Beckett for him to get out and do a bit of wandering around and wondering aloud, interviewing key people and asking pointed questions about the nature of and direction of the time, whereas with Sandbrook’s book you feel he’s basically racing against a deadline cutting and pasting other people’s work in furiously. There seems to have been a deep investment of time and thought in one, a sense that the Seventies matters and matters on a personal level as opposed to a maniacal, impersonal ploughing on through the post war decades ( Sandbrook’s already done the Fifties and Sixties) to keep your publisher happy on the other.

Secondly and most significantly, what’s both haunting and Hauntological about Beckett’s book, and the real sense in which it makes history “come alive” is its own aliveness to and quiet insistence on the possibility that it may all have gone some other way. Beckett’s book isn’t a “counterfactual” in the normal sense but it invites the reader into all kinds of speculations and reflections on alternate paths out of the Seventies: dusty inevitabilities are broken open into moments seething with latent possibility and as a result the text itself is ghosted by a whole series of alternate and parallel histories. In this sense Beckett’s work is packed with political energy, is “inspirational” not because it’s directly polemical but because it enlists the reader’s imagination, because it believes that there was and always is an alternative and that history is shaped both by chance and by the judgment and commitment of social agents at all levels. It’s a superb work of anti-Realism in other words, and as such, irrespective of the fact that it’s a book on the Seventies it is certainly a key book of our increasingly fractious times.

Email ThisBlogThis!Share to TwitterShare to FacebookShare to Pinterest
Labels: the tory lack of imagination

At least in the U.K. it's been deemed a decade worth unpacking, given that there's a number of books on the matter.

My own curiosity about this topic (from a U.S. perspective) has prompted me to do some similar poking around, lately. So far, I'm not having any great success. Most books I've encountered on America in the 1970s are either too minutely focused, too hung up on triviality, or just plain crap.