What is one million dollars compared to the love of eight million Cubans?

Many of the greatest boxers of the 1970's and 80's are almost unknown these days, due to the fact that the Cuban government discouraged its athletes away from professionalism. There were none so great as three times Olympic heavyweight champion Teófilo Stevenson, who in 1976 turned down a $5 million offer to fight Muhammed Ali, offered by American sports promoters. 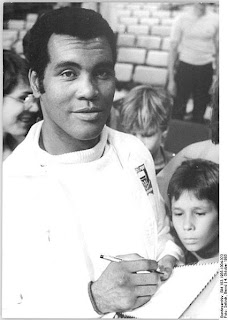 When Stevenson stepped down in the early 80's, his place in Cuban hearts was taken by the equally awesome Félix Savón, who matched his feat of three Olympic titles. The Cuban boxers offer the possibility of a fascinating parallel history, where perhaps the greatest boxers of all could be different from the names we are so familiar with.
Posted by Phil Knight at 09:45