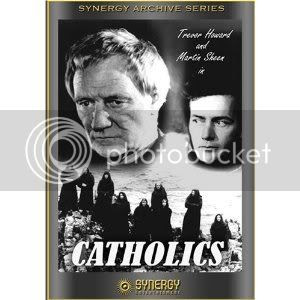 Both one of the most prescient and one of the most esoteric films of the 1970’s was Jack Gold’s "Catholics". Made in 1973 (for ITV’s Sunday Night Theatre), but set in the then near-future of 1979, it devastatingly examines the tension between the coming era of all-forms-of-belief-are-equal ecumenical liberalism, and the older forms of abstinence and devotionalism which for many Catholics was the basis of their faith.

The background to "Catholics" was the series of reforms enacted by the Second Vatican Council in the early 1960’s, which were intended as a response to changes in society and to make the Church more "relevant" to the modern world. As is usual with liberal thought, "relevance" assumed that what was needed was the removal or modification of any institutional elements that were deemed intellectually demanding, or prescribed (or proscribed) certain kinds of behaviour.

What the film therefore sets up is the kind of conflict (the film’s American title is "The Conflict") that was to become common in real life from the late 70’s onwards - the arrival of the young, eager, liberal improver (Father Kinsella, here played by Martin Sheen) to shake out the fusty, habituated, institutional stick-in-the-muds that insist on doing things in the bad old ways.

On a bleak windswept island off the coast of Ireland, a group of Albaesian Monks, led by their Abbott (Trevor Howard), have returned to reciting the liturgy in Latin, after the fictional Fifth Vatican Council have banned the practice as part of the Catholic Church’s ongoing strategy to merge with Buddhism. Even worse, the revival has struck a chord with followers worldwide, such that the congregations for the masses that the monks conduct are swelling to the point where they are becoming a media cause célébre.

There is nothing that alarms the liberal mindset more than the notion that market forces might be working against you, so Sheen is dispatched from Rome to use any means of persuasion necessary to cajole the irascible Abbott into abandoning his experiment in revisionism before events get out of hand. Fortunately for the forces of modernisation, Trevor Howard’s Abbott is not the formidable enemy of progress that he initially seems. Howard has his own secret, the darkest one of all, and his motives for his liturgical deviancy are far from what they initially appear.

"Catholics" is a sombre, serious film, illuminated by a heartbreaking performance by Trevor Howard as a man utterly broken by his contradictions. The complex discussions about doctrine and liturgy, around which the film revolves, highlight how some of the most sustained opposition to neoliberalism was deeply conservative. Such conservatism was deliberately misrepresented by liberal ideology - what is most dangerous to reformists such as Kinsella is not the reactionary doctrine of the traditional church, but the insistence on the primacy of the Sacred, even if those who are defending it are no longer believers themselves.
Posted by Phil Knight at 19:08