Another kind of folk hero emerged in the 70s. With the decline of the western (or at least it's conservative tradition), came the emergence of the urban vigilante. With 'indians' out the way, the new frontier was supposedly mollycoddled and multicultural. The new frontiersman fought against against "queens, dopers, junkies, fairies, sick" (Taxi Driver), where "the niggers are gettin' all the money" and the stagflated "dollar ain't worth shit!" (Joe). In the permissive Great Society where you can "screw, have babies and get paid for it" (Joe again), what other option was there but to "throw a net over the whole lot of 'em" (Dirty Harry)?

The outrage/celebration that greeted Dirty Harry and Death Wish is widely documented. Less known nowadays is the huge hit Joe (1970), with Peter Boyle* in the title role. Years before the vigilante flick found it's sequel-friendly formula (sometime around Death Wish 2, 1982), Joe was somewhat peculiar in the openness of his hate and resentment - and also as a comedy of sorts. Hard hat** Joe, cheered on by many an American audience, made no bones about his hatred for blacks, hippies, gays, liberals - or combos of the above ("42 per cent of liberals are queer!"). The meek adman, accompanying Joe on this mission of righteous vengeance, has with him the oldest of Hollywood motives: the rescue of a beautiful young white girl (here Susan Sarandon), from the forces of the not-so-white (dope-addled hippies and their black friends). No spoilers here, but let's just say what audiences cheered on for most of the movie isn't exactly rewarded at the end.

This is one of the first films to use the same formula as The Searchers in a modern, urban setting. Namely, a defeated, disillusioned patriarch/lawman/soldier takes up the big mission of rescuing a corrupted white girl from a permissive society/uncivilised 'tribe' - or her own misguided idea of liberation. The basic narrative angle is as old as this charming little caper: 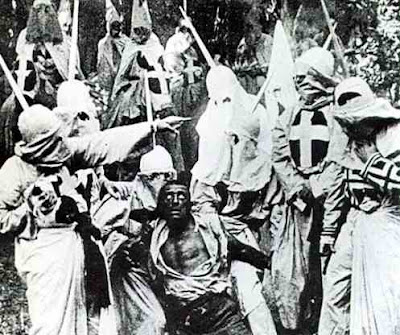 What was novel was how this urbanised formula, previously reserved for imperial swashbucklers and westerns, became a movie staple from Nixon to Reagan (now being revived somewhat with The Brave One, Law-Abiding Citizen etc.). The Searchers itself is all over 'New Hollywood' - in Taxi Driver, Dirty Harry, Prime Cut, The Wind and The Lion, Star Wars, The Deer Hunter (albeit a homoerotic variation) and Paul Schrader's Hardcore, with porn as the permissive evil. It's even the basis of a chat-up line in Scorsese's Who's That Knocking On My Door? It was the cult movie of the 'movie brat' film makers, for all its ideological confusion; and found itself applied to all environments during the 70s. 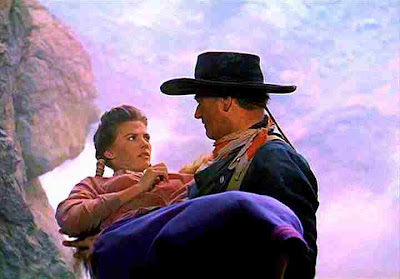 With the emergence of the full-on vigilante cycle, the formula was consolidated in that 'the girl' was seldom rescued - the story was frequently based on her being dead, or experiencing a fate considered worse. Revenge outweighed the notion of rescue - punishment was its own reward. The niggling doubts of Joe or Taxi Driver were ironed out in time for Reagan's Morning in America. The rhetoric became less verbally explicit, but the violence much more so (Charles Bronson would never say the n-word, but his bullets did the talking). It had it's 80s variations, as in the rape revenge cycle, or M.I.A. rescue fantasies (on which Ross Perot pitched his bid for president). But the violence and rage never lost it's intensity. Nor did the ideological conflict.

Not everyone may remember how divisive these films were. Accusations of fascism were common, until their attitudes became the basis for tabloid discourse and neoliberal jurisprudence during the 80s. I'd argue that the vigilante genre lost its potency with the emergence of talk radio and TV. The place where a million Joes can yell blue murder against the very same people Peter Boyle did forty years ago, spurred on by presenters 'telling it like it is.' Where those in opposition (if only by birth) to the rule of Capital are the ones "gettin' all the money" in the shape of welfare, civil rights, healthcare, union recognition etc. Where similar attitudes inform the negative solidarity of those viewing the world upside down. Where the only 'rebellious' option available to god-fearing 'hard-working families' is subjecting society's 'undesirables' to a violence far more direct than the economic, and asking questions later. 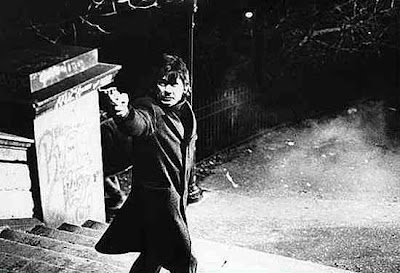 *Despite instant stardom, left-liberal Boyle was so appalled by audience reactions to his character (it was even cited as inspiration for a copycat massacre), that he resolved never to play a violent part again. Director John Alvidsen went on to direct Rocky, who went on to beat Soviet ass after regaining the heavyweight championship for blue collar white America.

**'Hard Hats' - Christian, militantly white, blue collar, hawkish and patriotic - became something of a 'movement' around the time of Joe. The rift between this wing of the American working class and the 'commie hippie faggots' of the New Left hasn't quite healed yet.
Posted by David K Wayne at 23:40