The Limits To Growth 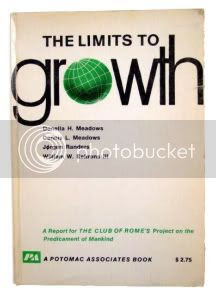 I tend to think of the ‘70’s not as an anomaly, but more as a harbinger of a world that will become more and more familiar to us - a world of slow but relentless economic decline. Almost forgotten now, the decade was a period where for a few brief years, questions were asked not just about Capitalism, but about the foundational, and normally hidden, assumptions of Western civilisation.

In 1972, the Club Of Rome, a global think-tank, published "The Limits To Growth", a report on the impacts in terms of industrialisation, agriculture, pollution, and resource depletion that would result from a doubling of the world’s population. Controversial even at the time, its message, along with other "limits" books such as E.F. Schumacher’s "Small is Beautiful" and William Catton’s "Overshoot" was nonetheless given greater impetus by the 1973 oil shocks, and the economic chaos they unleashed on normally smooth-running Western economies.

The message of these books resonated particularly strongly with the nascent environmental movements that had arisen out of the hippie subculture, and who took messages of conservation and appropriate technology to heart in experiments with "off grid" lifestyles that, though meeting with mixed success, will no doubt be revisited in the future. The movement was killed off by both the opening up of the Prudhoe Bay and North Sea oil fields, which were to guarantee the West a couple of decades of energy security (and which would be mistaken for "normality") and the rise of Neoliberalism, which as the eschatological variant of Capitalism, would necessarily eschew the idea of limits. One of the first gestural acts of Reagan’s "Morning In America" was to remove the solar panels that Jimmy Carter had had fitted to the White House roof.

Nevertheless, the classical economists revered by the neoliberal think-tanks, such as Adam Smith, David Ricardo and Thomas Malthus (notoriously) openly expressed a belief in limits to growth, which they simply saw as the inevitable result of the finite availability of land. It was the deft reclassification of land as a form of capital that allowed the "science" of economics to overlook the irksome constraints of nature. Nevertheless an economic philosopher as late as John Stuart Mill could still say:

"It must always have been seen, more or less distinctly, by political economists, that the increase in wealth is not boundless: that at the end of what they term the progressive state lies the stationary state. . . ."

Hollywood, of course, caught the idea of limitation and decline and extrapolated it forwards in a strain of science fiction that was distinctly dystopian, and more often than not requiring the services of Charlton Heston. Movies such as "Planet Of The Apes", "Soylent Green", "Logan’s Run" and "The Omega Man" depicted various post-apocalyptic futures resulting from war, overpopulation, disease and pollution, in which survival is a lottery conducted either by unseen overseers, or as a war of all against all. Such posited futures were predicated more on the millenarian thought-habits of the Western mind than on inevitable future events.

Because of course, the end of growth, and consequent decline, doesn’t need to lead to starvation, anarchy, totalitarianism or genocide. Between a techno-grandiose future of plenty and the apocalypse, there lies a "third way" - decade after decade, century after century, of drab, dilapidated crapness; a distended Seventies stretching over the horizon, where it may only give way to a similarly distended Fifties, and then a Thirties and so on. This is the future most unacceptable to the Western mind, but alas the one it appears most likely to encounter.
Posted by Phil Knight at 10:30

There is a chance you're eligible for a new solar energy program.
Click here to find out if you are qualified now!